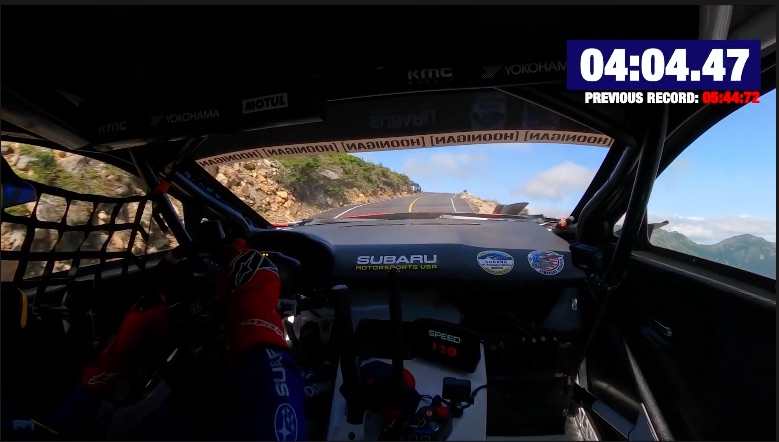 This is one of those ride along videos that made us grip the arms of the chair about 10 times. The Mt Washington hill climb has been around something like a century or more. It has been on and off but this year it was on and Travis Pastrana was the major attraction, attempting to break the record of 5:44:00 to the top of the crag in New Hampshire. His chosen weapon for this task is a Subaru WRX known as the Airslayer. You’ll see all kinds of wings and stuff on this car and it uses them.

Pikes Peak gets all the headlines as far as American hill climb events but Mt Washington is pretty bad ass and insanely dangerous. Look at the sheer drop that Pastrana is playing with when the tree line fades away. It’s nutty and he is hammer down for so much of this run that it defies description.

Pastrana obviously has done many things in his career from stunts to racing NASCAR, rally racing, and more. As a traditional “race car driver” he is a different cat but as a rally driver or a time trial runner, his skills really, really shine.

If you don’t believe us, watch this and tell us we’re wrong.

Bonneville Speed Week 2021: We're Almost Out Of Photos From This Year's Speed Week Is There A Ford Mustang Sedan on The Way? Some Circumstantial Evidence Suggest Maybe!

4 thoughts on “Insane Record Run: Ride With Travis Pastrana As He Tears up Mt Washington – Bonkers!”