Speed Records: Listen To The Amazing Sounds Of Sebring Record Circa 1956 – Crank It Up!

Jan 17, 2019Brian LohnesApex Video, BangShift APEXComments Off on Speed Records: Listen To The Amazing Sounds Of Sebring Record Circa 1956 – Crank It Up! 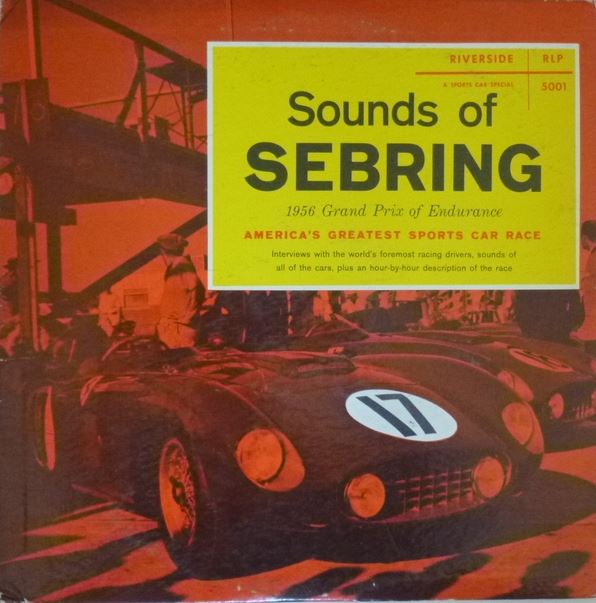 Anyway, sports car racing was rather popular in the 1950s and early 1960s, though coverage was limited mostly to print magazines like Road & Track and the SCCA’s SportsCar magazine. The 1956 12 Hours of Sebring was, however, part of the FIA’s World Sports Car Championship that included other legendary races like the Mille Miglia, 24 Hours of Le Mans, and the Carrera Panamericana. And with this increased stature, Sebring received a brilliantly executed vinyl recording from the race.

I’m not 100 percent certain how a jazz label like Riverside with releases by giants like Thelonius Monk and Charlie Parker elected to start releasing narrated racing recaps, but Barrett Clark’s narration captures the nature of America’s early participation in the world sports car racing world so perfectly.

The first side of the record includes great interviews from motorsports legends Juan Manuel Fangio, Phil Hill, and Sterling Moss but also adds in comments from racers who have unfortunately fallen into obscurity since the 1950s: Bill Spear, the Marquis de Portago (a Spanish royal), and even Italian driver Porfiro Rubirosa wondering if his Ferrari can run the entire 12-hour race on one set of tires. Hell, if you’re a Ferrari fan, you owe yourself a listen just to hear Luigi Musso roll the “rr” in Ferrari. And if you’re a Corvette fan, the four fast-but-fragile C1 ‘vettes were the first of the breed to race in force at Sebring (making this year Corvette’s 60th anniversary at the classic race).

Side Two brings the actual race and the cars’ glorious engine notes: the howling 3.0-liter Maserati, the brutish Ferrari V12, a Lotus’ urgent 1.1-liter Coventry Climax, and an impossibly throaty 1.5-liter Porsche 550 engine. There’s too much to recap, but the Clark’s pacing—complete with the roaring race engines in the background—somehow conveys the grandeur of this race held amongst Florida’s orange groves from the time of piston-engined airliners.

It’s an vivid audio postcard from a long-gone era and this postcard comes with the most awesome possible signature as the needle nears the record’s center: a Fangio flyby ending in a picture-perfect, rev-matching downshift.

Bomb Blast: This Chevelle's Transmission Detonates As If The Pin Was Pulled! Frequent Flyer Miles: J.Malcom's G-Body Wheelie Collection Of 2018