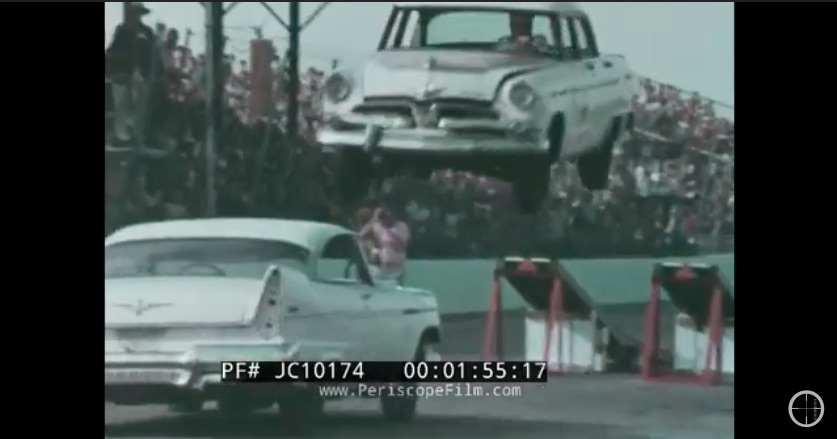 It’s pretty crazy how “entertainment” changes, right? Back about 50 years ago, ABC’s Wide World of Sports would show up at a dusty circle track on a fairgrounds somewhere and shoot, for national television, a stunt driving troupe doing their act. If you suggested even a small cable outfit come and shoot the same thing these days they would laugh you out of the joint. Now, add some flaming hoops, rotating knives, or seemingly death defying act by 2021 standards and you’d have something to argue about but back in the day, this was extreme and as you’ll see people at it up.

Not only did crowds eat it up, companies loved to sponsor these shows. Manufacturers like Ford would either give cars or cut buddy deals on them, companies like BFG would give tires to the shows in trade for promotional value, and the list of parts and pieces goes right on down the line. These guys were warriors back then, performing multiple times a day at fairs, multiple times a week in different locations, and living almost entirely out of the very cars that they were performing in.

Yes, this is all kind of cheesy by our “extreme” 2021 standards but we love every second of this footage. It is fun, the cars are awesome, and the history is just too cool.

More Camaro Nationals Photos: It's Amazing How Many Awesome Camaros Showed Up For This Show! Incredible Video: The Most Awesome Raw Pontiac Trans-Am Racing Footage You Have Ever Seen Or Heard!