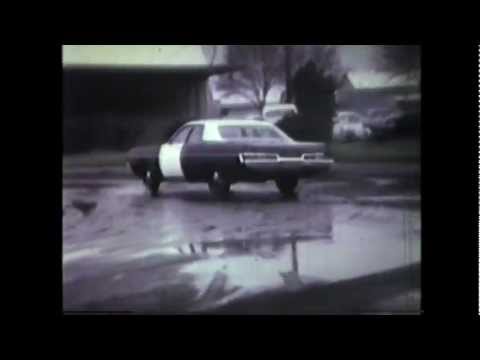 We have to thank a Mopar lovin’ tipster for this killer 25-minute film depicting California Highway Patrol driver training in 1971. The police cars shown in this video are 1971 Dodge Polaras with 440ci motors. There are also a ton of other classics shown being used as “violators” or chase vehicles. The video is narrated by a former instruction at the EVOC (Emergency Vehicle Operational Control) school. The true magic is the minutes of footage featuring a 1970 Plymouth Superbird chasing some of the cop cars and blowing their doors off on the road course section of the facility. That big ‘bird is heaving and sliding all over the place but manages to blow off a Polara in the straights. This is really neat stuff.

Other highlights include a bunch of footage from a skid pad coated with 50-weight oil being ringed by cruisers wearing recapped slicks and lots of neat  in-car footage of drivers sawing at the big steering wheels in the cars.

This is converted 8mm tape so the quality is certainly not HD, being 8MM film there is no engine noise and the camera work is amateur, but if you are going to criticize that in the face of such totally awesome content, you are doing it wrong. The CHP has an EVOC facility still,  but it is not the same one as shown here. Cadets still go out and learn the finer points of careening their cruisers around at full tilt!

Press play and listen to the narrator as he takes you though 25-minutes of totally awesome never-before-seen footage!

Oops! This Collection Of Old School Wild Rides, Carnage, and Funny Moments In Pulling Is Great This Cool Little Rig From Sweden Turns Anyone With An ATV Into The Head Of A Logging Operation - We Want This For Christmas