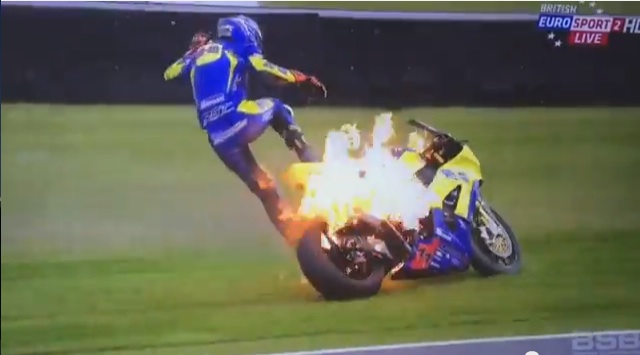 Were you a firebug as a kid? I was. I’m amazed that I didn’t burn down the Little League complex that used to be where the Bandix Dog Park now stands. My idiot brother and I would top off an empty soda can with the good stuff from the shop, bolt across the road, and proceed to try to emulate patterns in the sand, or try to write our names in gasoline. Somehow, we didn’t get burned and didn’t catch acres of Scotch broom on fire. I still can’t tell you how we managed that, but we learned quickly: gasoline and fire equals a bad time if you’re super close to it.

Taylor MacKenzie’s race at Snetterton in 2015 came to a very abrupt halt during the second British SuperBike race, when a fuel line ruptured on his Kawasaki Ninja ZX-10R, spraying onto the engine and exhaust, and turning MacKenzie into a very unwilling Ghost Rider stunt double two laps into the race. MacKenzie was laying into a corner north of 120 MPH  when the fire erupted, and in a matter of seconds he righted the bike, went for the grass and jumped off before any major damage was done. Take it from every male on Earth: that’s too much fire too close to some sensitive bits.

MacKenzie took to Facebook later, making light of the situation: “I’ve canceled my wax for tomorrow.” Taylor, when your managers said you should “light a fire under your ass this season”, I don’t think this is what they had in mind. Glad to see everything is alright and you came out unscathed…and lightly toasted.

Ever Seen A Locomotive Do A Burnout? This Is One Heck Of A Look At One! 2020 ECTA Firecracker Mile Gallery: More Straight-Line Action From The Airstrip