Watch A Greenwood Corvette Lose An Engine In Flaming Fashion On The Banks Of Daytona!

Feb 13, 2020Brian LohnesApex Video, BangShift APEXComments Off on Watch A Greenwood Corvette Lose An Engine In Flaming Fashion On The Banks Of Daytona! 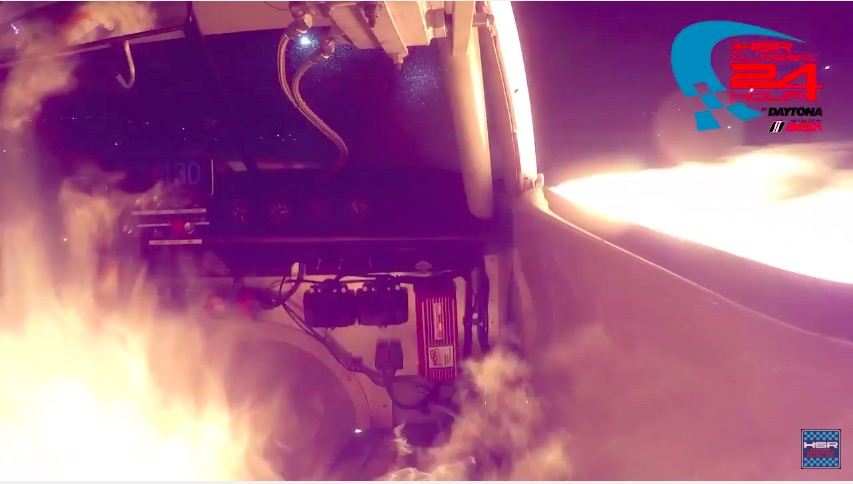 The most positive among us talk about how there’s “no such thing as a bad day at the race track” and while there are times that we agree with such Pollyanna vision, videos like the one below challenge that attitude. We’re sure that Didier Andre, who was driving this Greenwood Corvette when the excitement started at Daytona International Speedway would agree with us.

As you will see, Andre was making about 160mph down the banking at Dayona when the engine became instantly unhappy, a bunch of oil started escaping and a second later he was sitting in the middle of an inferno. Making the situation even worse is that when the engine failed it locked the entire drivetrain up tight and send him spinning into the infield.

The fire was instantly ferocious with all of the basically oil vapor igniting at once and then claiming down some. A massive volume of oil came out of that thing at once as the whole windshield was covered and you can just see it all over the place. Andre did his job as the fire suppression system was triggered as the car spun down into the grass infield. As an observation and not a criticism it seems as though the electricity in the car were not switched off. The lights on the dash and the hum of a fuel pump were the tell tales.

We’re just glad that he and the Corvette are ok. You normally don’t see one like this out of a road racing car. Funny cars? Yes! Old school V8 Corvettes pounding the pavement? Not typically.

Unhinged: The Right And Wrong Way To Sell The 1982 Ford Mustang Salt In The Wound: This 1988 Chevy Monte Carlo SS Hurts McT's Soul!