Jun 17, 2019Brian LohnesBangShift XL, XL VideosComments Off on This 1954 Willys Jeep Promotional Film Shows Every Awesome And Insane Jeep Attachment Made At That Point 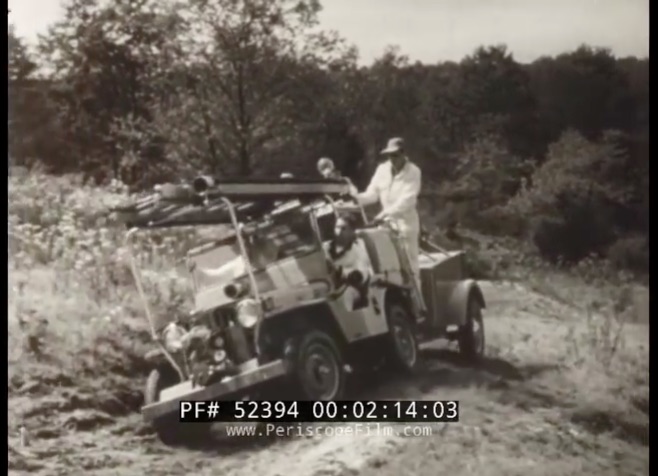 This is awesome. This is totally awesome! What you are about to watch is a 1954 Willys Jeep promotional film which happens to show virtually all of the awesome attachments that were available for post WWII Jeeps. Everything from cranes to trenching machines, brush hogs, fire fighting equipment, welders, saws, generators, and the list goes on and on and on. Today we think of Jeeps as fun vehicles designed to take us places in the wilderness or off road that other vehicles cannot get to. In 1954 it was not about fun, it was about showing off the amazing diversity of a vehicle that helped our country win WWII, which as you all well know was still pretty fresh in the minds of the folks that lived through it.

We love the fact that they were really pushing for these things to replace tractors at farms, at least in some jobs. Pulling the two bottom plow, the disc harrow, powering the hammer mill, and basically doing all the stuff that a small-ish tractor could do, all while providing the ability to drive into town at a moment’s notice had to have been appealing. The trencher is one of my favorite attachments because of the fact that it looks like a complete man-eater. That thing would grab onto loose clothing and the only thing left of you would be some red goop. It was up to the operator to take car and run the thing correctly.

After they run through a dizzying array of Jeep stuff the Willy film switches into pickup trucks, panel delivery rigs, and other versions of the four wheel drive theme.

This is really awesome and a great look back into the marketing angle of the Willys company in the 1950s. Nope, it was not about recreational four wheeling fun, it was about getting the job done on the farm!

Call It Ingénue: Get A Walk-Around Of The Buick-Powered Buick GS Funny Car! Rocky Mountain Race Week 2019: Our First Gallery From Pueblo, Colorado!