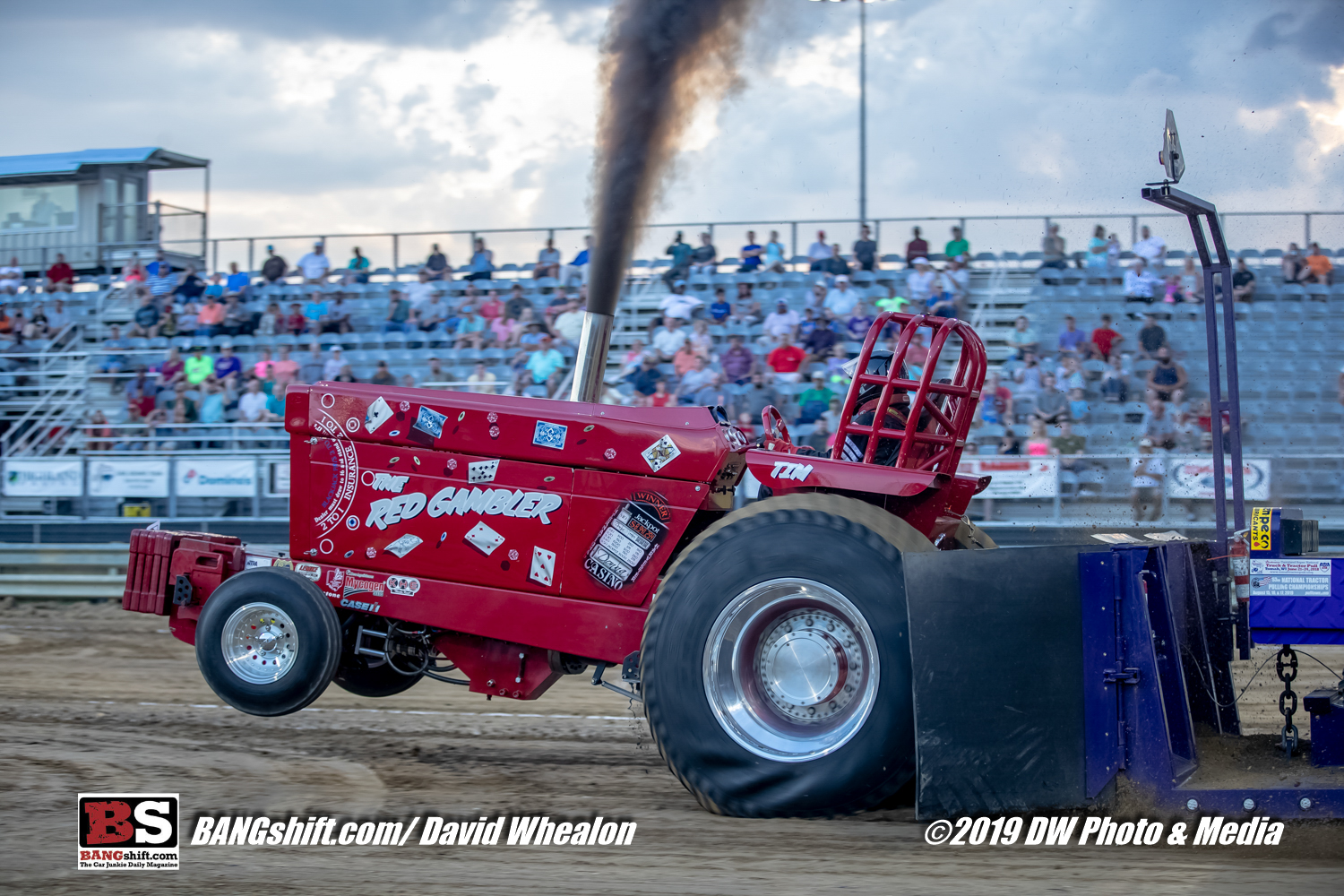 (Words and photos by David Whealon) – As always, the first weekend in June marks the time when Galot Motorsports Park gives the 1/8 mile dragstrip a break and opens the up the back gates for the first NTPA Grand National Tractor Pull of the season. The 6th Annual Mule City 300 was yet another show of spectacular pullin’ action. Eight classes with over 100 competitors were on hand to deliver us a tremendous display of awesome sled yanking horsepower. The three diesel smoking classes of Super Farm, Pro Stock and Light Pro Stock gave the fans their favorite color to cheer for. Red or Green. And to add a bit more color to the mix in Light Pro Stock, the lone Orange AGCO Tractor “Galot M” brought the total up to 32 smokers on the property.  Rounding out the field of stock appearing tractors were the alcohol burning Super Stock Open class. Brought back after a two year hiatus from the show were the twin blown engine wheels up Light Unlimited accompanied by their hemi counterparts of Modified Mini, 4 Wheel Drive Trucks and the funny cars of pulling, the Modified Two Wheel Drive Trucks.

With the show slated for two sessions on Friday and Saturday night, good ol’ Ma Nature had something else in mind for Friday night. After about 1-1/2 hours of non-stop action of the 4 Wheel Drive Trucks and the Pro Stock classes the sky opened up only to complete the 4 Wheel Drive Trucks class with Peyton Davis’ “Punisher” crowned the winner. All but a few of the Pro Stock tractors got a chance at the hook before the rain and as per NTPA rules the session was a wash and all competitors were awarded first place championship points. All was not lost though. The pro Stockers got a test n’ tune for Saturday night.  Saturday night was a different story. All classes were run on a great hooking track and the pull-offs were aplenty. As it is with this being the first hook of the 2019 NTPA season and the one and only session for the majority of the pullers, the off season tune-ups played a big part of the action. We saw some extra yardage hooks and some wild Mini Rod unruliness from the veterans along with tractors puking turbos.  What an interesting night it was!!