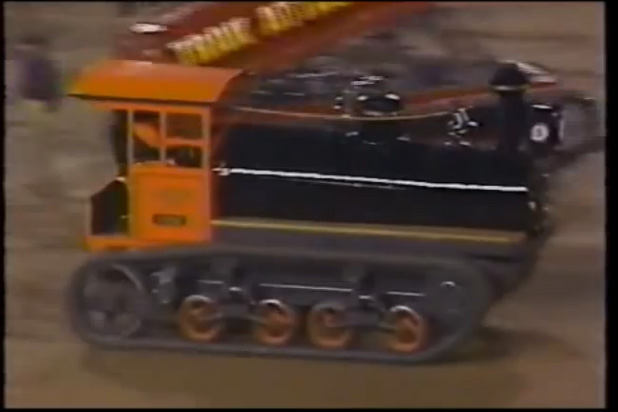 If you were a monster truck and pulling fan as a kid in the 1980s the name Allan Gaines triggers an immediate smile. Gaines became well known for his beautiful Orange Blossom Special 1937 Chevrolet pulling truck. The machine became famous when a line of toys was produced around it and it appeared as part of the Bigfoot and the Muscle Machines Saturday morning cartoon series. I had the toys and loved to see the truck on television whenever USHRA events were televised. It would pull huge wheelies and the paint job was immaculate. Good times. Carrying the train theme to an entirely more awesome level, Gaines built what I think was the craziest monster truck of all time in the form of the Orange Blossom Express, a tank-truck that looked like a full sized steam locomotive, including exhaust routed through the front smoke stack.

The era of the tank-trucks in the monster truck realm was pretty short. They were significantly faster than the trucks with rubber tires, more maneuverable and made the same (and sometimes better) noises but like lots of things that are “better” fans didn’t get into them like the rubber tired trucks that actually looked like the trucks they drove to the arena in. Take heed, every form of racing ever. While they were around, the tank trucks were pretty mean and this video proves why. You are going to see the Bigfoot Fast Trax race the Orange Blossom Express. I’m not sure what the ol’ Express has for an engine but I am guessing a blown big block Chevy where the Bigfoot truck has a pair of blown Ford 460s! Lots of these trucks were based off of old Sherman M4s or troop carriers. I have no idea what Gaines used as the foundation for this beastly destroyer.

The giant train is making its public debut in this video and the major flaws begin to show themselves immediately. I’m not bagging on the train because I love the thing but there are some reasons it was never going to be a successful racer. The first reason is weight. On the TV screen, it lists the train at 23,000lbs while the announcer declares it the heaviest monster truck ever at more than 30,000lbs. We bet the truth is somewhere in the middle but the height, weight, and sheer girth of the thing becomes immediately apparent when you see it parked next to the comparatively lithe Bigfoot tank. The most major issue is the driving position, though. Gaines is seated at the extreme rear of the locomotive. While this nod to accuracy was surely applauded by the steam engineers union, it doesn’t make for a successful racer. Why? First off there’s little chance that Gaines can actually see anything in front of him. Remember, guys driving trains back in the day used to hang their heads out the side of the cab. Gaines is strapped in and looking dead nuts at the big smoke stack. Plus he is like five feet in the air where as Chandler in the Bigfoot tank is low and up front. Lastly, Gaines must have never ridden in the back seat of a school bus. The bouncing and whip action being at the rear of this thing is so violent, you’ll see his helmet get launched off after he drives over a pile of cars at about 2:00 in! He seems to be in a big rig air ride style seat but this is violence personified. Imagine riding in the back of a bus driving over a stack of cars at relatively high speeds….you’d be bouncing off the roof, too!

There is very little video of this thing in operation, so we know that you 1980s monster truck lovers will dig this look back at one of the biggest, craziest, and most seldom seen monsters ever, the Orange Blossom Express!

PRESS PLAY TO SEE ONE OF THE SHORTEST LIVED AND COOLEST CAR CRUSHERS OF ALL TIME – THE ORANGE BLOSSOM EXPRESS LOCOMOTIVE!

Wild Video! Watch This Botched Hercules Landing In Antarctica - Wild! Rough Start: This 1979 Ford Fairmont Is A Plug-And-Play Winner! Bring Your Own Engine!