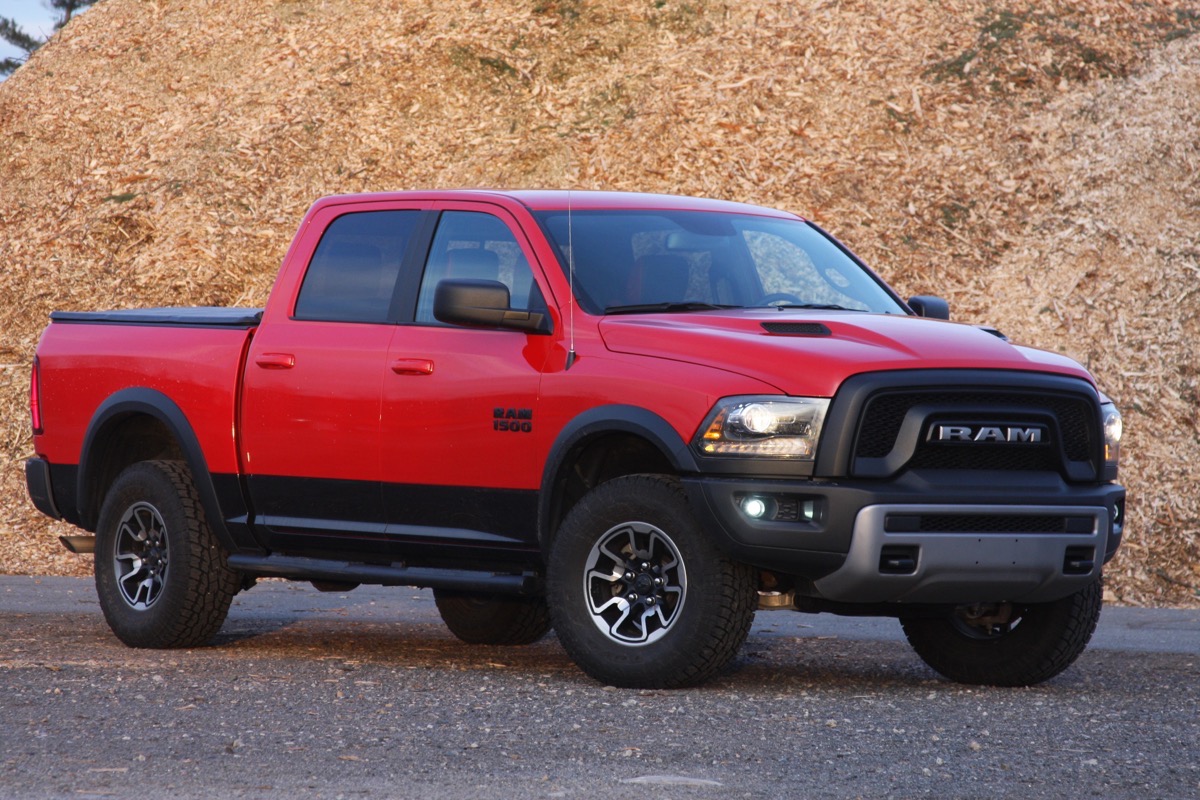 The 2016 Ram Rebel is an interesting case in that it kind of created its own niche in the already populated pickup truck market. Not as hardcore as a Raptor or a Power Wagon but more capable than trucks like a Tundra TRD Pro it is a neat way for a manufacturer to offer someone a truck that rolls off the lot with some of the upgrades that many truck owners complete shortly after they take ownership of their rigs. Stuff like a mild lift, 33″ tires, and a locker for instance. It does all of these things and then wraps itself in a pretty bold looking package that has one of the more love it or hate it reactions we’ve encountered in any new vehicle we have test driven in years and there’s been a lot of them.

We’re classifying this as a “fun truck” because that’s kind of where it is designed to shine. A stock Rebel will not run the Baja like a Raptor but it will be capable enough in the mud and in off-road situations to let people have their yucks before cleaning the rig off and driving it to work the following week.

Available in the short bed,crew cab setup you see here only, customers do not have the option of changing that layout but they do have a pretty good list of options of click if they so desire. Our test truck came with the standard 3.6L Pentastar V6 that makes 305-hp. That engine was mated to an 8-speed automatic transmission which set power to axles that had 3.92 gear ratios in them. Four wheel drive engagement was achieved with buttons on the dash. The truck does not have a floor lever like its big brother, the Power Wagon. The base price of the truck is $45,200. Our truck had a $50,400 sticker price and was equipped with the following options: 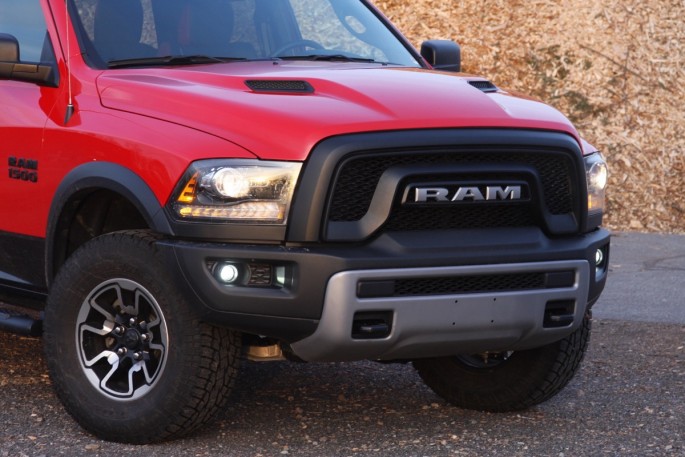 Along with that optional equipment the truck comes pretty well equipped in terms of passenger comfort. The interior is one of the defining things about the truck with the cool “tire tread” pattern in the seats and the black and red colors throughout. We drove the truck hundreds of miles and through all different types of settings and found the interior to be really comfortable. We have always been fans of the Chrysler digital interface and we continue to be. If it is not the best one on the market, it is one of the best. The layout is good and all the functions are simple to use. That’s not the case across the board (we’re looking at you Ford).

Cab space is ample, which is underselling it by vast amounts. The cab is massive and that makes for plenty of legroom for people of all shapes and sizes, no matter where you are sitting. There’s storage space for days in the center console in both an open compartment and in the cavernous space that can be accessed by flipping the lid back that also acts as an arm rest. One of the really ingenious parts of the cab is the load floor that can be laid out when the rear seats are flipped up. The load floor provides a perfectly flat platform for stacking boxes, drum cases, or whatever else you need, in volume. The cab is one of the truly strong points of any Ram truck and the Rebel follows along with our experience there as well. 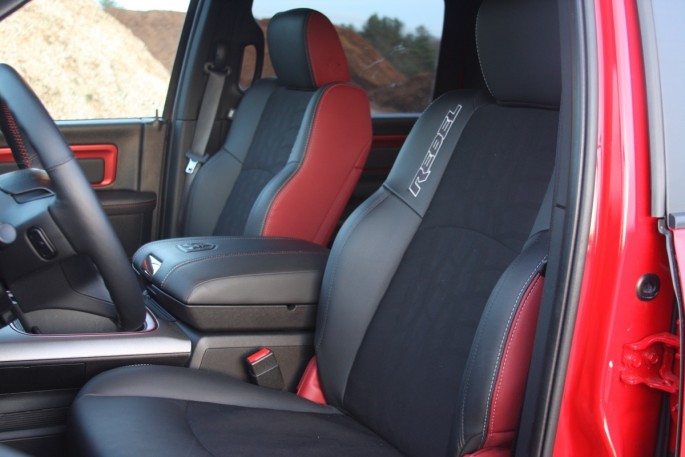 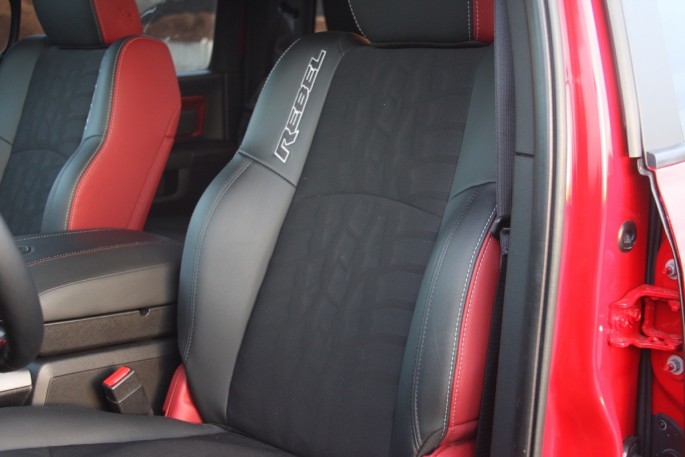 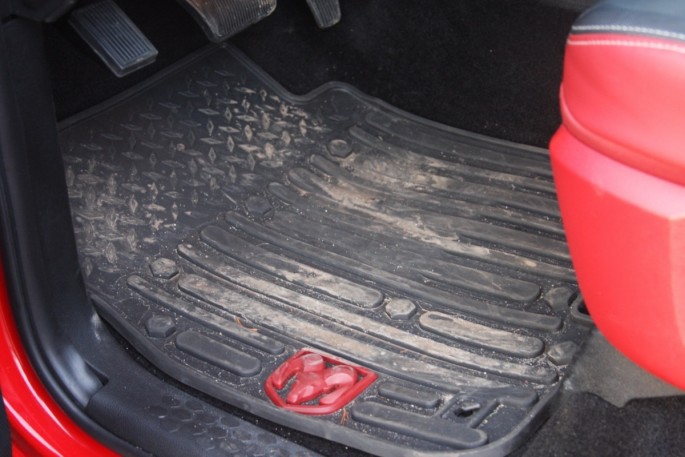 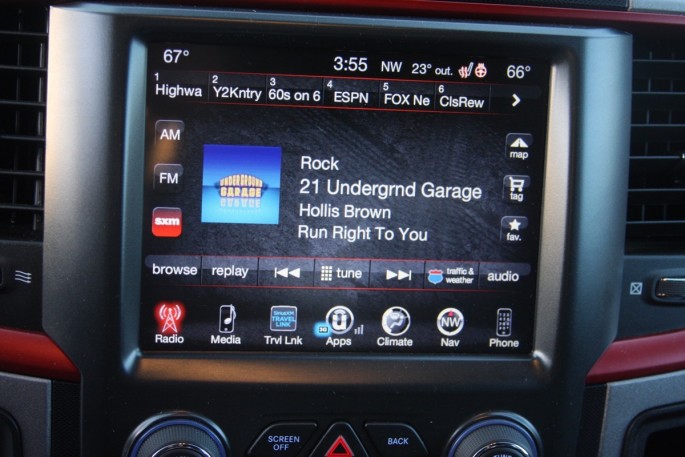 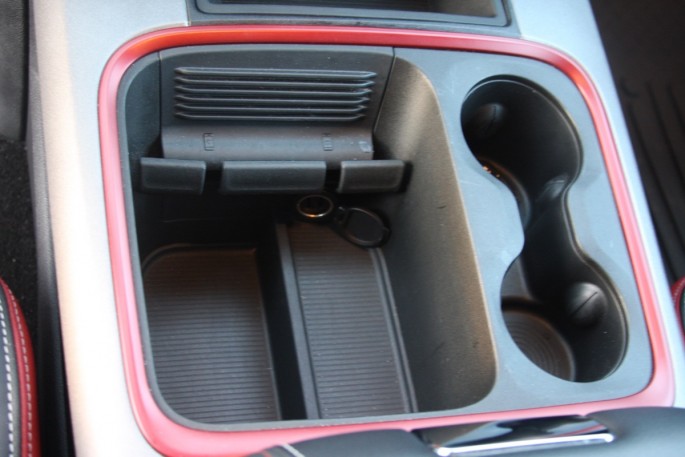 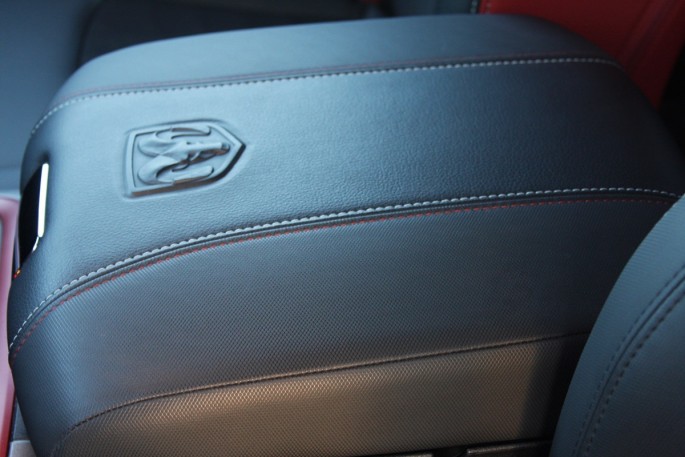 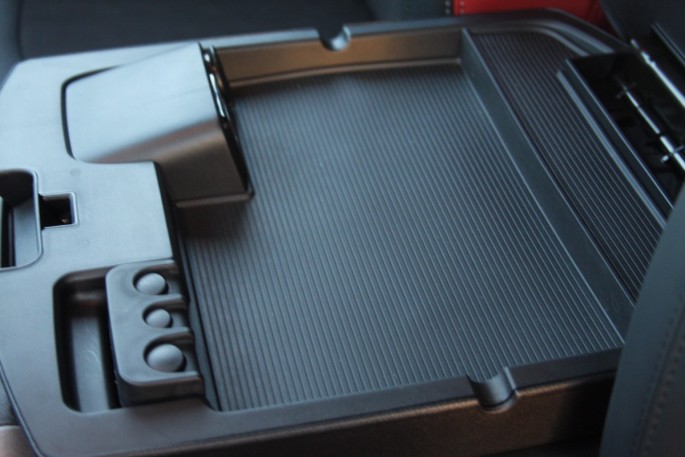 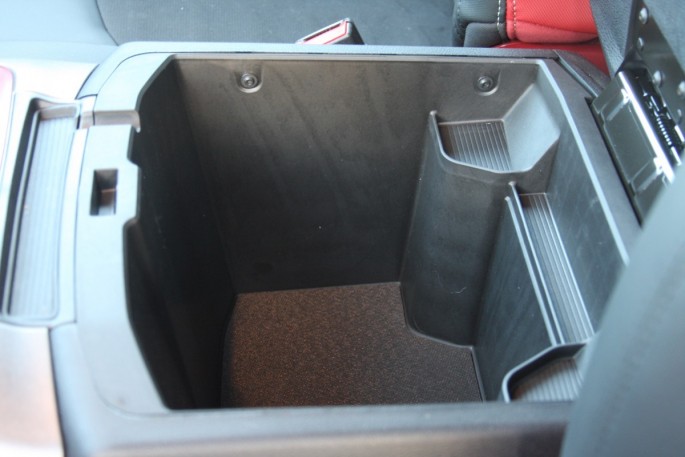 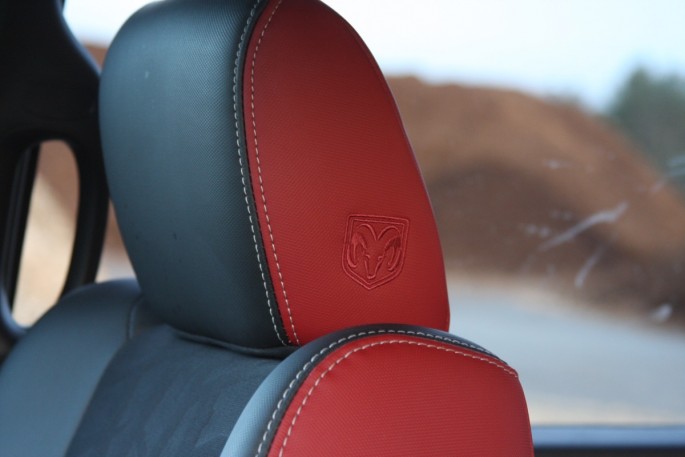 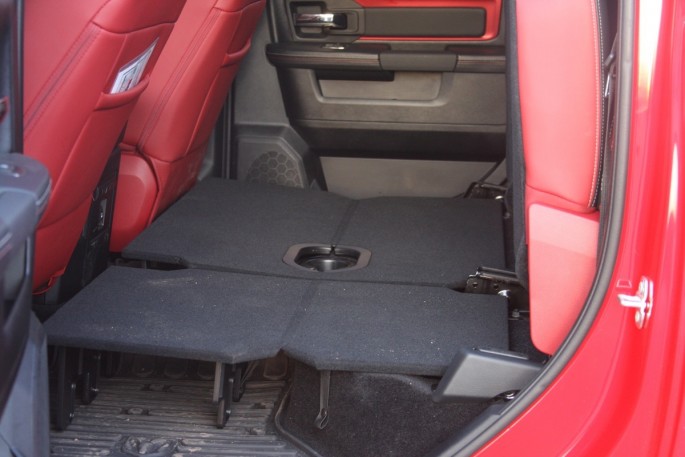 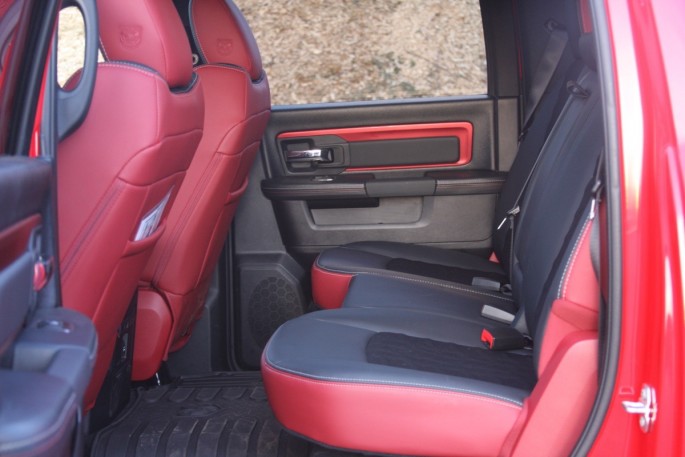 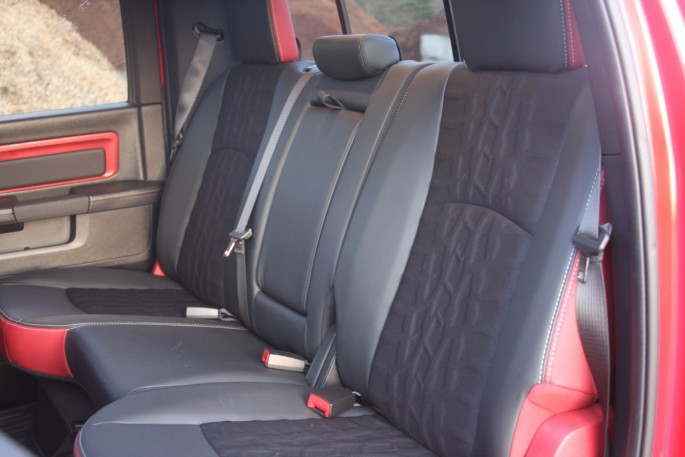 One of the biggest selling points of this generation of Ram trucks is their four corner air suspension and this truck uses a tweaked version of what every other Ram 1500 is rolling around on. Sitting 1″ higher than stock in its normal setting, more ground clearance can be achieved by simply hitting the button on the dash to rase the truck into off-road height. The rig does have a nice, commanding presence on the road and you’ll immediately notice a slight altitude difference between you and the millions of other half ton truck drivers out there when you are cruising around. The 33″ Toyo tires are pretty aggressive for a stock truck and we did not find them to be noisy although people who have never driven anything with off-road tires may hear the road noise and wonder where it is coming from. If you have ever driven anything with Swampers on it, these are whisper quiet. If you are concerned about getting in and out of the truck you can actually “dump” the air suspension with the key fob and the truck will kneel basically all the way down to get in. The side steps on this truck were handy for the kids, for sure.

The ride splits the difference between a Raptor and a stock half ton Ram. There’s Bilstein shocks under this truck, sway bars, and of course the air “springs” keeping things tied together. It does not have drastic lean or dive while on the brakes but it does have a slightly softer ride than other half ton Rams we have driven and on Massachusetts roads that was cool. We took the truck on some fire roads and at speed it was soaking up some pretty good chuck holes. Fun, indeed. We found the ride and handling of the truck to be a definite strong point because you definitely felt as though you were in something a little cooler than a standard cruising model truck. 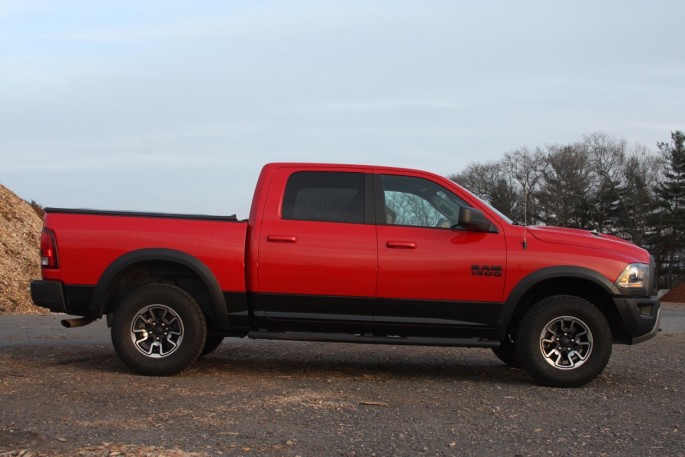 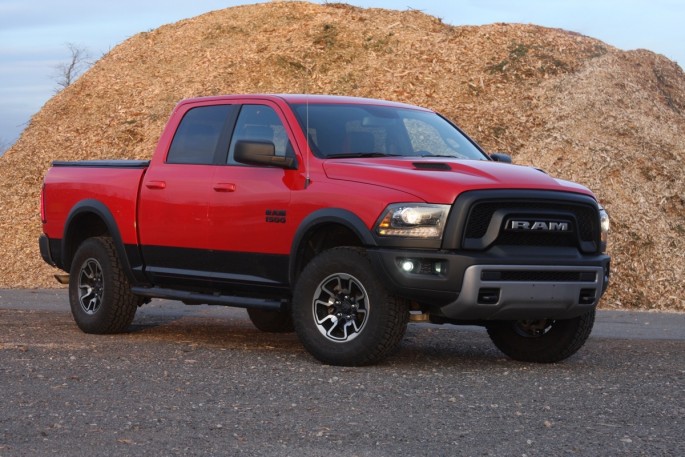 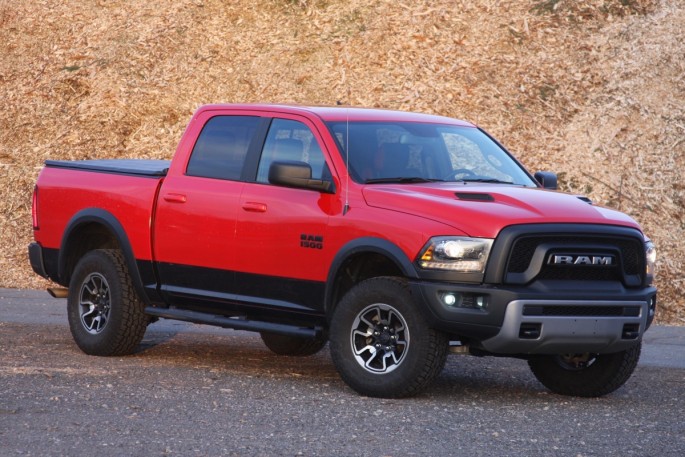 While we have to admit to being a little bummed to see that this Ram Rebel was powered by the V6 base engine when we got it, we vowed to give the little mill a fighting chance before passing judgement. The good news is that under normal use, the V6 and its 305-hp are fine for zipping around town and the city in normal life. The reason the engine feels so good in the truck is of course the eight forward speeds behind it and the 3.92 gear in the axle. The bad news is that we would never willingly option this engine in the truck if we were buying it. Why? A couple of reasons. The first is that the 3.6 is very strong in the screaming upper reaches of its RPM range. When you see this truck do you think 7,000RPM full throttle gear changes? Neither do we. The voice certainly does not match the body in this case and we feel if you plan on doing any amount of towing, the $1100 bucks you’ll spend for the Hemi and all of its additional power and torque is well worth it.

We’re not indicting the engine because it delivered decent (15.8mpg in mixed driving) mileage over the course of our time but every time we stood on the gas and that banshee-like scream came from under the hood and ultimately out the exhaust it was just not the noise we wanted to hear. Not to be crass but if you are already spending this kind of money on a rig just go the extra mile and get the more capable engine in it, right?

We have had multiple experiences with the Chrysler eight-speed and we like it very much. It is a solid and quick shifting transmission and never seems to be hunting for the right gear and does a good job making the V6 engine look semi-heroic when the truck is unladen and you need some acceleration RIGHT NOW.

The locker in the back is a worthwhile and good upgrade. While we had the truck, Old Man Winter came to New England and for fun we drove around with the truck in 2WD in snow with the traction control off. The Toyos are not the greatest in the snow but the locker kept forward progress moving. 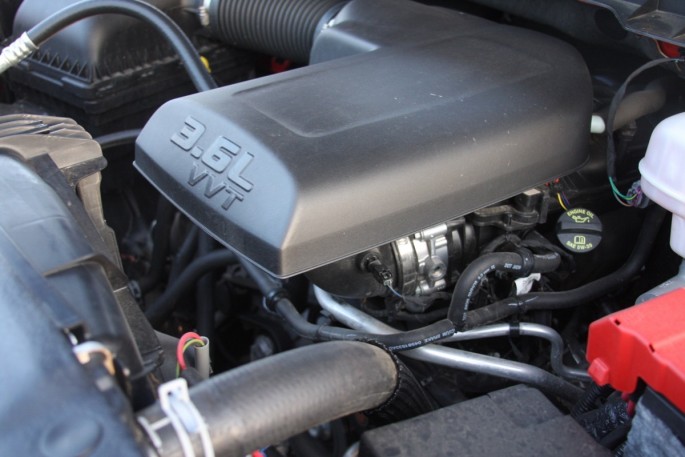 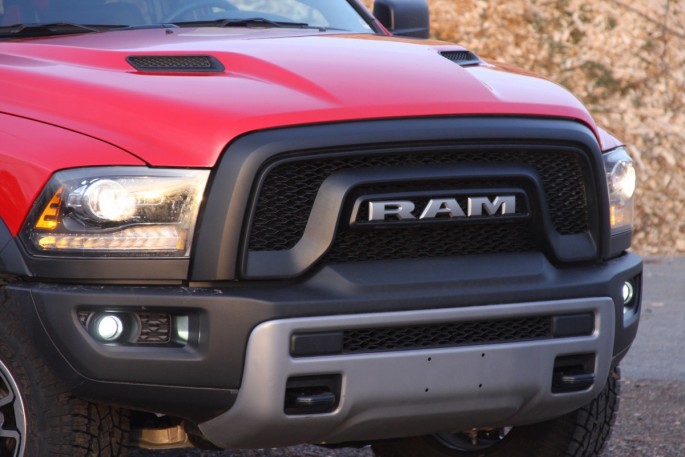 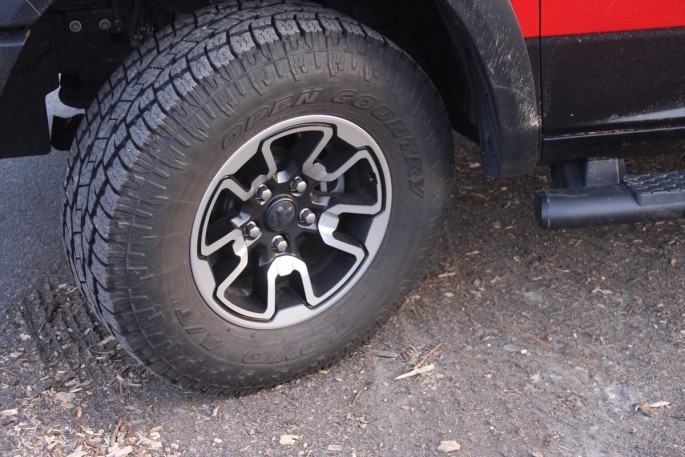 So as much as we want to geek out on the mechanical aspects of the truck and its capability, let’s be real here. Maybe 5% of these things will ever see a granule of dirt. People will buy the Ram Rebel for what it looks like. This thing is about as polarizing a rig as we have ever had out. People either freak out and ask what it is or they are kind of reviled by the front end. It sure is different and Ram is sticking with it aggressively because the new Power Wagon is also sporting this nose.

We dig the hood and it keeps with the design language. We do wish the scoops were at least open as heat extractors or something. We cannot consciously allow ourselves to give fake scoops a thumbs up.

The wheels are good and wrapped in the beefy tires they pull the whole thing together nicely. The black fender flares along with the blacked out rocker panels work for us as well and we’re totally on board with the humongous RAM across the tailgate. Many people thought this was obnoxious but we think it is a good throwback (in spirit anyway) to the 1970s Dodge Macho trucks and some of the stuff they did during that era. If this is supposed to be a fun truck, being a little in your face is fun!

Basically if you can get by the initial reaction to the nose many people have, you’ll dig the truck long term. 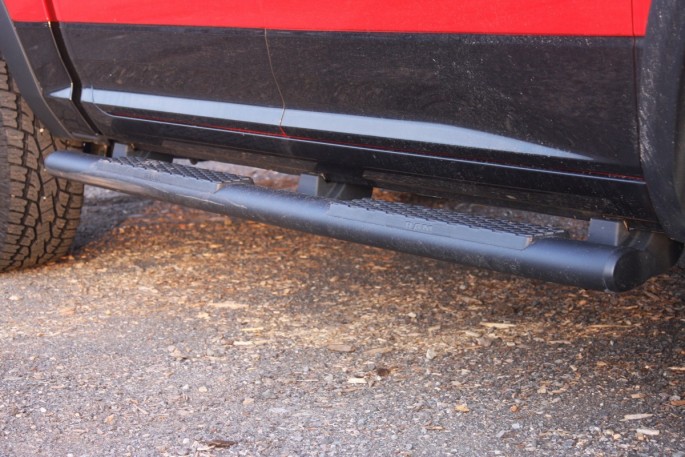 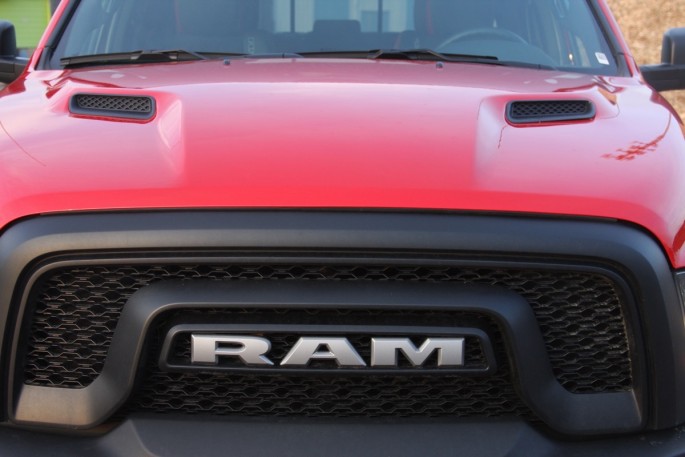 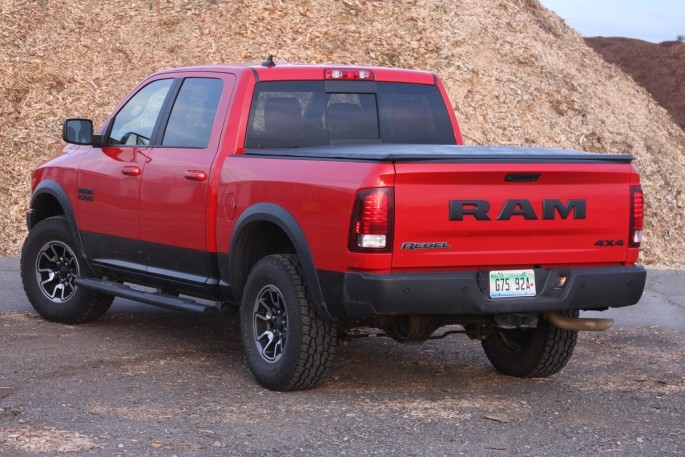 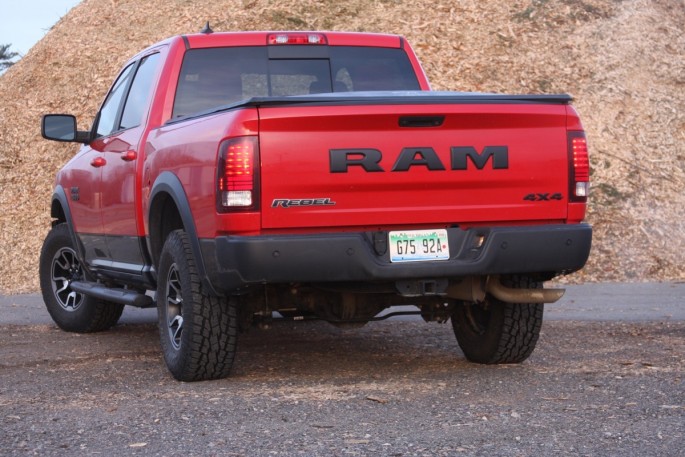 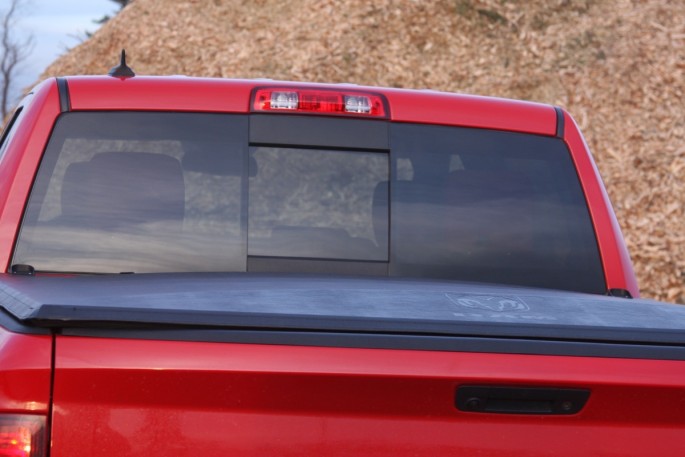 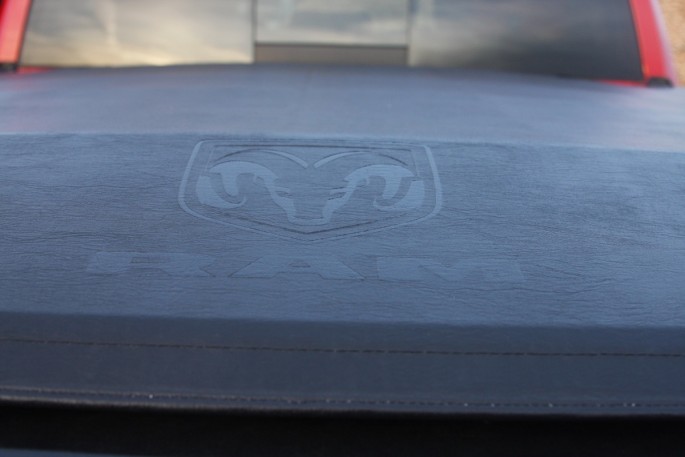 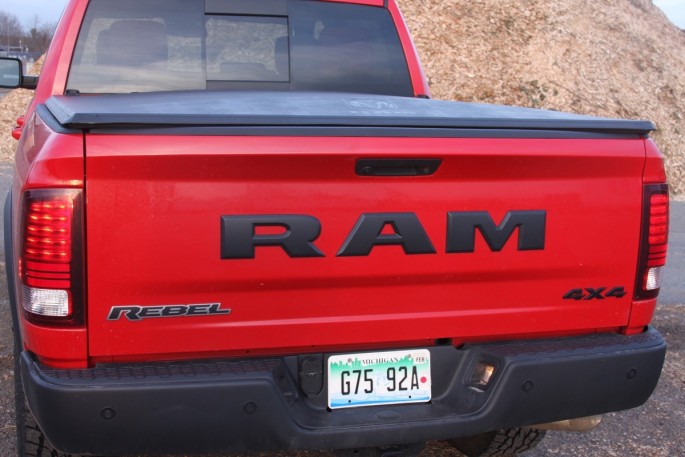 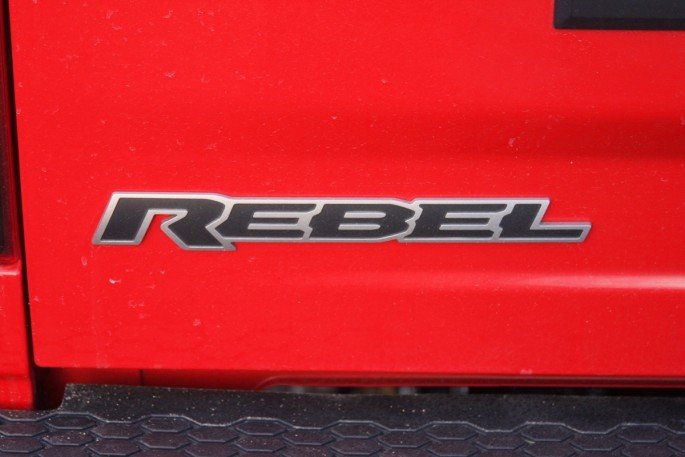 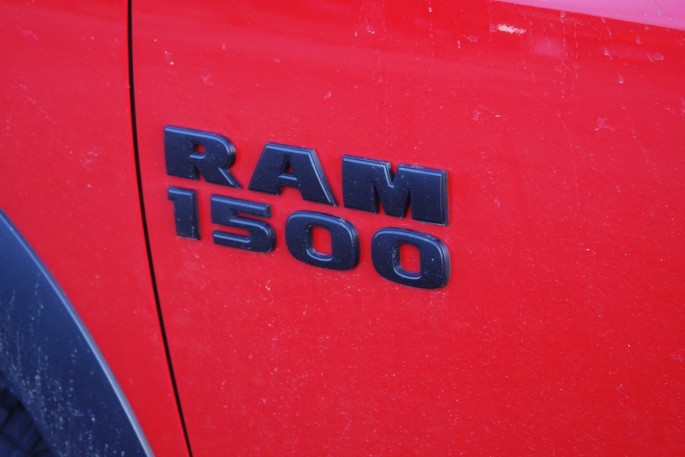 Trucks are expensive. That’s a fact of modern life these days. The other fact of modern life is that the only thing that dealers cannot keep on lots these days are pickup trucks so someone has the money to buy them and Dodge has done a really nice job of building a truck that buyers looking for a little more capability and a whole lot more image than a standard half ton can latch onto.

We enjoyed our experience with this truck but were ultimately let down with the choice of power plant. The high-rpm, screaming nature of the V6 just did not fit the supposed burly character of the Ram Rebel. We’d happily roll in one of these day in and day out, through the snow, over the highways, and on the weekends, in the slop but we’d have to do it with a Hemi.

The Toroidion Electric Supercar From Finland Has The Equivalent Of 1,341hp And Is Insane Red Morning With KC Mathieu Was One Of The Best Internet Videos Of 2016 - Sideways Truckin'!

One thought on “BangShift Truck Review: The 2016 Ram Rebel – Is Ram’s Fun Truck Offering Just That?”