45 Hours, Coast to Coast, In A Custom Dodge Van? This Is The Four Ball Rally 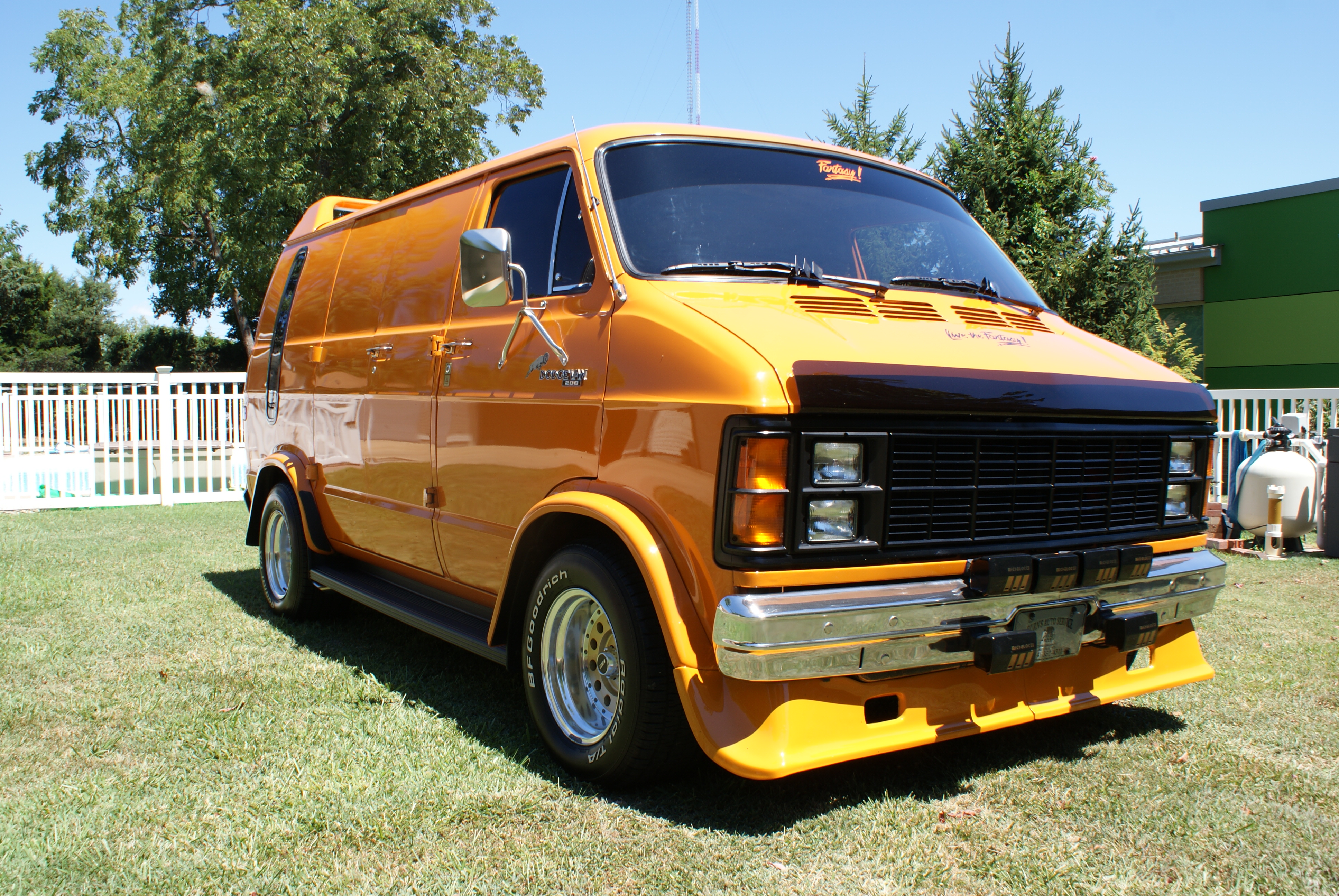 (Words and Photos by Jim Smoot) Boston, Massachusetts – June 2, 1984… In the early morning hours, in the pouring rain, more than a million dollars worth of exotic automotive machinery & 47 drivers assembled at a secret location in Boston.  There they made hurried last minute checks of their equipment as, one by one, the high performance engines were fired to life.  Then, at 3 minute intervals, these men & their machines began a wild coast-to-coast journey at speeds well in excess of 100 miles per hour. 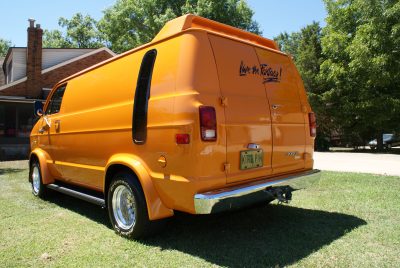 The event is the Michael A. Preston Memorial Four Ball Rally & the racers come from all over the World to participate in this 3,000 mile dash for $10,000.  The prize money, substantial though it may be, is not the incentive in this extraordinary competition.  Most of the racers have, at the least, several times that amount invested in their vehicles & the specialized equipment needed.  The real prize in this no-rules road race is in the running & completing of the event, doing battle with the clock, severe weather, mechanical failures, fatigue, irate citizens & the highway patrols in roughly a dozen states in an all-out attempt to be the first to roll into San Diego, California.

“Fantasy” Jim Smoot (President), Mike Giaffino (VP) & “Radical” Randy Shekell (VP) of Fantasy Coachworks was the first St. Louis team & the first custom van ever entered in the event.  They raced across the country in a meticulously prepared Dodge Van dubbed the “Orange Quest” by Bill Burns the team mechanic, because of the vibrant sunburst orange paint scheme.

Hundreds of hours were spent planning & modifying the van for the race.  A specially prepared 340 “Cuda” engine gave the van its 125+ mph top speed.  As Team Fantasy would soon find out, every bit of that speed would be necessary to compete with the 930 Twin Turbo Porsche, Corvettes, super-charged Camaro, & the specially prepared European BMW’s that ran the event. 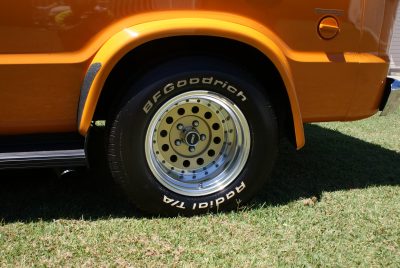 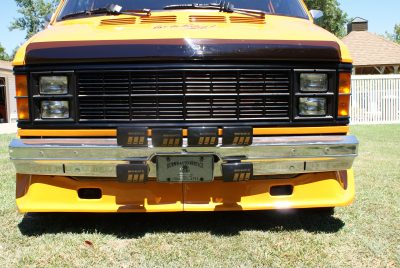 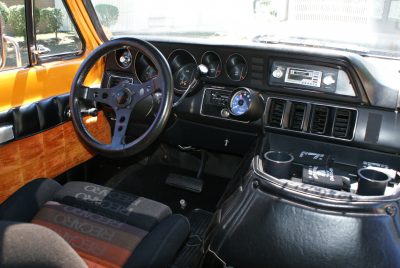 Team Fantasy was prepared with extra driver’s licenses, bail bond cards, lots of cash, food & beverages & no doubt free flowing adrenaline.  They had also concocted a wildly imaginative cover story about delivering the van to the Universal Studio’s A-Team set for a stunt sequence, complete with bogus documents from Chrysler Corporation to back up the tale.

The Fantasy Team rolled out of Boston at 90 mph in a heavy downpour, everything working perfectly.  Once into New York and out of the rain they pushed it up to 100 mph. New York State Police had been alerted to the rally racers by an anonymous tip & were waiting in ambush along the State Turnpike.  They arrested the drivers of six rally vehicles, including the Fantasy team.  All denied being involved in any kind of road race.  One State Trooper took one look inside the van, & after viewing all of the gear, the only comment he could muster was,” Man, you guys are really wired!  What place you in?”.  The police scanner was confiscated & an abundance of citations were handed out.  The New York State boys were obviously not impressed with the A-Team story.  After paying some heavy fines, all six were back on the road breaking the century mark again.

Everything went smoothly for the next 10 hours, until dark, just into Indiana the alternator went out plunging the Orange Quest into real country darkness.  The part was quickly replaced with an onboard spare, the gas tank topped off & it was back to the high speed pursuit of San Diego.

Another 12 hours without mishap were squeezed out of the clock.  By this time, the rally van was burning down the Arizona highways.  REALLY BURNING!  A matter-of-fact message came over the CB radio from a trucker they had just passed…”You boys in that fancy van are on fire!”

The rubber skirting of the ground effects had been ignited by the hot exhaust & was burning fiercely just underneath more than 80 gallons of fuel!  Skidding to the side of the road, there was a mad scramble to get outside with the fire extinguishers.  Aside from one roasted side skirt, the fire hadn’t caused any major damage.

The Fantasy rally team was now well over half-way to the West Coast & had not been passed by or even seen any of the other racers.  There was no way of knowing what place they might be running.  In the near distance, the far western tip of the Rocky Mountain range rose up in sharp contrast to the flat desert country that they had been crossing for endless hours.  As the minutes ticked by, they wondered how many of their competitors had already made the first of the mountain crossings.

Another 45 minutes & they began the steep ascent on a twisting 2 lane road.  A storm that had been brewing opened up full force as they topped the mountain.  For 30 long minutes, they catapulted down the mountain’s backside in the driving rain at just under 100 mph with a whipping crosswind buffeting the van back and forth on the narrow road.  By the time the road flattened out at the bottom, several severe cases of white-knuckle had developed.

8 hours more running at nearly full speed, brought the St. Louis team to the base of the Laguna Mountains.  The long uphill haul against winds reportedly gusting up to 50 mph caused the transmission to overheat and boil out nearly all of its fluid.  Just 85 miles from the finish line and Champagne in San Diego and the tranny was out!  Jim, Mike & Randy watched in disbelief from the side of the road as the rally team in the Mercedes rocketed by, and then minutes behind, the team in the supercharged Camaro.  One hour down time & less than an hour from San Diego & they had lost 2 places!!

Once the transmission had cooled & been refilled with fluid, the rally van gobbled up the remaining 85 miles & clocked into San Diego at 45 hours, ninth place out of 23 entries.

Deduct their total down time (6 hours) & they would have gone Coast-to-Coast in 39 hours just off of the winning pace turned in by a specially prepared Pontiac Trans-Am.

Incredible as it may seem, in all previous years of the running of the Four Ball Rally & its predecessor the Cannonball Baker Sea-to-Shining Sea Memorial Trophy Dash on which the hit movie “The Cannonball Run” is based, there was not a single serious accident or injury.

This was a classic Tortoise vs. Hare race.  The challenge was to take a cargo van (with the aerodynamics of a bread box) and make it competitive with high performance sports cars.  But realistically, even with all of the specialized equipment, the Orange Quest would not be able to out-perform the exotics on the open road.

Jim’s strategy was to be completely self-contained, thereby eliminating time consuming pit stops.  If the Orange Quest couldn’t win with speed, it could win with time.

The van was not only equipped with food, drink, spare parts & tools but also an on-board port-a-potty from an RV.  Believe me, no one wanted to be the first to use that port-a-potty, but before the van rolled into San Diego, everyone had!

What Worked & What Didn’t

THE POWER:  The Kirn Racing Mopar 340 V8 was “under-built” for reliability.  While it did include high-performance parts like Holley, Crane, Edelbrock & Hooker, the part #’s used were for a mild increase in performance.  Top speed on the van was about 125 mph using 2.71 rear end gears.

THE ENGINE & SUSPENSION:   Prepped, installed & tuned by Bill Burns of Burns Auto Service.  Burns’ meticulous attention to detail ensured that the Orange Quest performed flawlessly for nearly 6,000 miles.  There was no time for “test runs” and the van wasn’t trailered to the East Coast.  When the Team pulled out of St. Louis, their “test” was an all out sprint to Boston.  They raced balls to the wall from Boston to San Diego and after a 1 day rest “raced” from the West Coast back to St. Louis.  Though an alternator had failed in Indiana & the tranny boiled out its fluid during a wind storm in the mountains, there was not a single mechanical failure, repair or adjustment made in nearly 100 hours of “racing”!

HOW IT HANDLED:  Massive sway bars, heavy duty gas shocks & Pirelli P7 Rally tires on light-weight Enkei wheels made the van literally stick to the road like a go-cart.  The front air dam & fender flares were modified with 4” front and 8” side rubber extensions that nearly touched the ground creating extreme down-force & giving the van a “vacuum cleaner” appearance.  At top speed on the open freeways, the sheet metal body of the van would creak & sway (much like an airplane on take-off) but the tires, suspension & aero mods kept the van absolutely stuck to the ground.  Even on the twisting 2 lane mountain roads, the van could hold its lane at race speed.

THE ELECTRONICS:  In 1984, there were no cell phones, lap-tops or GPS.  The police scanner was useless as it needed to be “reprogrammed” in every jurisdiction.  It was confiscated in New York (later returned).  The front & rear radar detectors also proved useless at anything over 75 mph.  The team got so many “false” alarms, that they turned them off shortly after the race began and agreed to “floor it” regardless of the consequences.  Only 1 ticket was issued during the race (New York) and 1 ticket on the return home trip.

NIGHT DRIVING:  The van was equipped with 3 pairs of high powered driving lights but at speeds over 80 mph the lights would “wind-flutter” so bad that they created a kaleidoscope effect on the road.  The team was forced to turn them off and rely solely on the factory high beams for nearly 20 hours of high speed night driving.

THESE GUYS WERE INSANE:  The drivers (ex-motocross racers) had no race car or rally experience.  Literally sitting on an 80 gallon interior fuel cell (can you say “rolling fire ball”?), they strapped themselves into the Recaro seats and using only a trip kit from AAA, held the pedal to the metal for nearly 45 hours!

DID IT WORK?  “Fantasy” Jim’s strategy was a tremendous success.  When you subtract the down time for the arrest in New York, the failed alternator in Indiana, the fire incident in Arizona and the delay in the mountains due to the overheated tranny – The Orange Quest was just off of the winning time.  The team finished a very respectable 9th out of 23 but more importantly, the team proved that they could meet the challenge of racing the clock from Boston to San Diego in one of the most daring races known to man.

A MARKETING BONANZA:  The nationwide press and subsequent news releases, feature stories, full color posters and “personal” appearances of Team Fantasy & the Orange Quest proved to be a marketing & promotional stroke of genius for “Fantasy” Jim and his Fantasy Coachworks custom motoring accessory & conversion company.  In the late ‘80’s Fantasy Coachworks would go on to expand to 32 stores operating or under development in 8 states.

B & M Transmission & shift kit by The Gearbox

RV Port-A-Potty by “It was his idea” (Jim had to empty it in San Diego!) 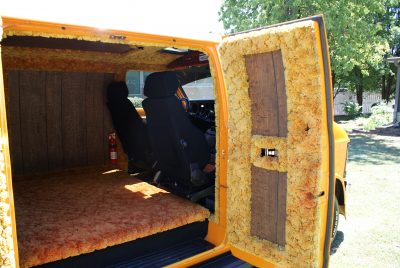 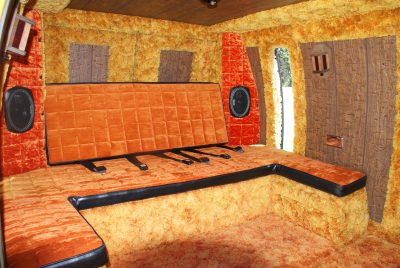 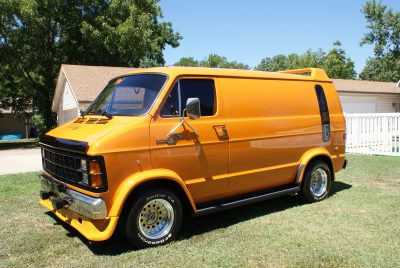 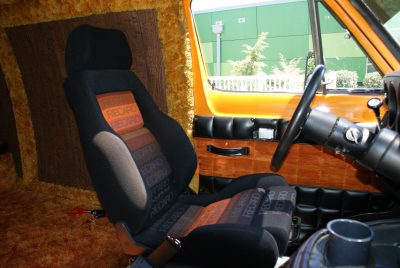 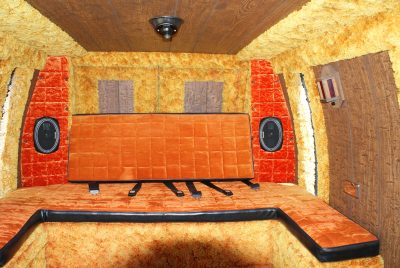 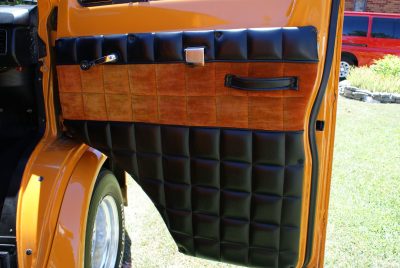 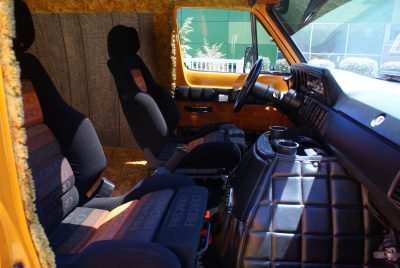 NOTE:  After the “world tour” the Orange Quest was returned to its original interior design and the roll cage, aluminum gas tank & port-a-potty were removed and destroyed…A decision that “Fantasy” Jim would come to regret in the future.  As of 2018 the Orange Quest has been stored for the past 30 years in a temperature controlled garage.  This one owner van is unrestored and has the original factory paint and “hand-built” custom interior from 1980.

Morning Symphony: Working Out A 410ci Ford On The Skidpad In An XC Falcon! Historical Bonneville Video: This Glimpse Of Hot Rods On The Salt Will Make You Smile

3 thoughts on “45 Hours, Coast to Coast, In A Custom Dodge Van? This Is The Four Ball Rally”