Pluggers Beware: Pricing For the F-150 Lightning Is Revealed And They’ll Put Hair On Your Wallet

(By Tom Lohnes) – Ford has just revealed pricing for their highly anticipated F-150 Lightning, and it isn’t as affordable as you would expect. Here’s what the configurations look like.

F-150 Lightning Pro- Starting with the base model, Ford describes the Lightning Pro as “A must have truck for serious work and recreation.” Starting at $39,974 before rebates, the Lightning Pro is definitely the truck that makes the most sense in the lineup. With no front lightbar, vinyl seats, and 18” wheels as standard, the Pro doesn’t look the best, but it definitely has the best value proposition out of the whole lineup. The downside? You can’t get the 300-mile, 577hp extended-range battery in the base trim. The next-up XLT trim gets it though, with a significant catch.

F-150 Lightning XLT- Starting at $52,974, the Lightning XLT is no bargain. With cloth seats, 230 miles of range, and the same wheel and tire setup as the base model, the XLT is really not all that appealing for the price. But, you can get the extended-range, 300-mile battery on this one, just at an insane cost. For nearly $20,000 more, the extended-range XLT starts at $72,474. Yikes. For this price, you get as much range as a Rivian R1T gets standard, just with none of the luxuries or power. Hopefully the US government increases the tax rebate soon, because over 70 G’s is a lot to ask for an XLT.

F-150 Lightning Lariat- This is the redundant truck in the lineup, because it makes the XLT look like it makes no sense at all. With upgraded wheels, a 15.5-inch touchscreen, and a leather interior as standard, the Lightning Lariat starts at $67,474 with 230 miles, which is significantly more than the XLT, but is $77,474 with the big battery, which is only $5,000 more than the XLT. This rig is unquestionably worth the upgrade over the model below it, so I predict this will sell the second most, only surrendering first place to the Pro. 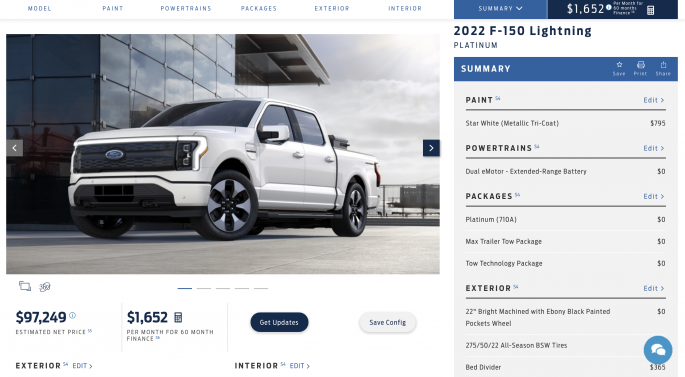 F-150 Lightning Platinum- Finally coming standard with the big battery, the Platinum is by far the best in the lineup. It is priced like the best too, starting at a staggering $90,874. Prices can go upwards of $97k with options too, which is legitimately concerning for an F-150. With the astonishingly price tag aside, the Lightning Platinum is a legitimately nice truck. With 577 horsepower, 22” wheels, and massaging seats as standard equipment, Lightning Platinum owners will be rolling in comfort and speed. The perfect luxury truck for the perfect millionaire.

So, overall I am pretty shocked by the Lightning’s pricing. This was supposed to be the first “Affordable” EV pickup truck, but only the base model really conforms to that. There is quite a few people willing to buy though, with over 100,000 pre-orders. Expect road-going models to be in owner’s hands in 2023. 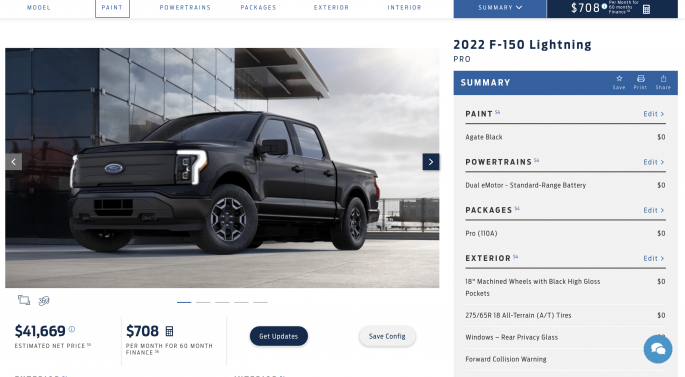 Teeth of Steel: This 1942 British Film Profiling Mechanical Excavators, Cable Shovels, and More Rules How Quick Is Quick: Breaking Down Just How Nasty An 8-Second Aussie Falcon Is At The Drags

4 thoughts on “Pluggers Beware: Pricing For the F-150 Lightning Is Revealed And They’ll Put Hair On Your Wallet”