What Do You Think Of The Samsung Safety Truck? 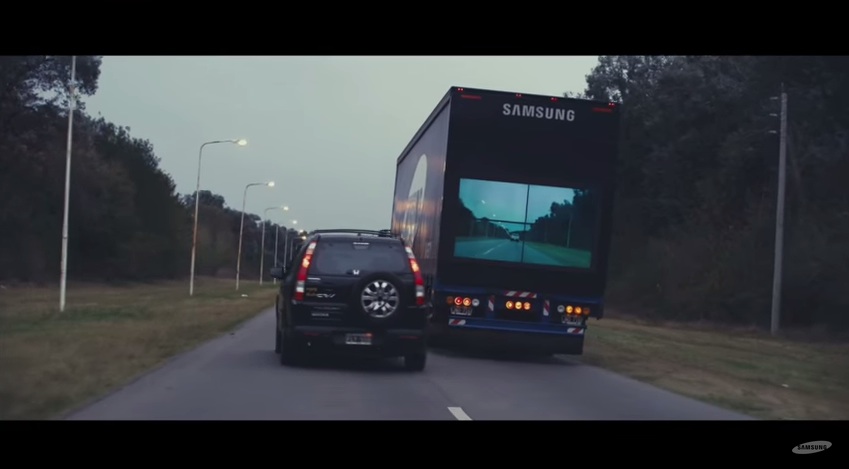 Have you seen the video of the Samsung Safety Truck yet? If the answer is no, don’t worry, it’s right here so you can answer the question after you watch it. If you have, get to answering. Let us know what you think. I’m torn. I absolutely see the benefit of being able to see what is in front of a truck you can’t see around. With that regard I think it is a great idea, after all who of us hasn’t been on a two lane road somewhere far from anywhere and had to do the swerve and peak to try and see around a big rig in front of us.

But will people also end up getting caught up in it and staring at the screens rather than paying attention to what else is going on around them? You know, like if the truck decides to slow down! What if someone hacks into the wireless system and plays a football game on the back of the truck? That would be distracting for normal Americans.

I’m not really sure. It seems like such a smart idea in so many ways, which automatically gets me thinking there must be something wrong with it as well. I know there is, I just don’t know if those are less important than the lives that are saved by having it.

What do you think? What’s the good, the bad, the ugly?

I’m all about safety in reasonable amounts. Seat belts, stricter driver’s training and periodical driver testing are intelligent methods to maintain safety on public roads. Then there is the group of people who go flying off of the deep end and go for broke. Remember the motorized “mad mouse” seat belts of the late 1980s, or even better, the ignition defeat system of the early 1970s? Sure, in theory they were great ideas, but they were failures that didn’t work well. Looking at Samsung’s new Safety Truck system, I’m a little torn as to which side I’m on. On the positive end, I’ve driven on single-lane roads in places like Illinois and Missouri and have found myself stuck behind many a semi truck, usually out of the Gilster Mary-Lee facility, and have to play the weaving game in order to safely pass and return to a speed that isn’t glacial. On the other hand, Samsung has plastered four big-screen televisions onto the back of a semi trailer, rigged up a camera to the front end of the truck, and now drivers behind the truck can just make a break for it. And night time driving has to be fun behind the semi…I don’t care if it does have a night mode, that’s still four screens blasting some method of light towards another driver. What do you think, BangShifters?

14 thoughts on “What Do You Think Of The Samsung Safety Truck?”