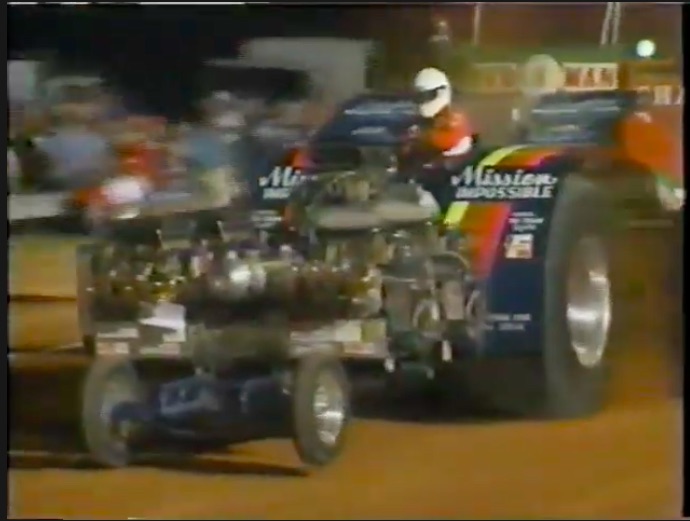 There’s something about a vintage pulling broadcast that gets me ever time. Maybe the fact that I work with Army Armstrong’s son week in and week out with NHRA, the fact that the tractors, engines, and people are so cool, or just the fact that it takes me back to some sort of weird mental happy place. This particular show is freaking fantastic and I watched it end to end last night after stumbling upon it. What makes it so good? First off, it is all 7,200lb tractors with a bunch of engines, second there is some controversy as (not at this 7,200lb weight) a couple of the premier tractors have gone to SEVEN engines and everyone is beginning to wonder how and when this trend ends, thirdly there is bad ass pulling. Not just the noise, they flying dirt, I mean the actual performances are bad ass.

When the Banter operation and the Engler operation were at the same place at the same time in this era, any pulling fan worth their weight in dirt knew they were in for a show. The names are still revered in the sport and their accomplishments are too lengthy to spell out here. If you are a drag racing fan it was like seeing two of the great funny car or dragster competitors line up and battle. This one even has a plot twist ending that you’ll appreciate.

The era of tractors with seven engines was all but done by the early 1990s and funnily enough, none of the machines you see here actually have seven engines on them because of the weight class they are battling in. Neat stuff and a hell of a show.

Hot Hatch History: This Look Back At The Hot Hatches Of The 1970s Is Great - No, The Golf GTI Was Not First Unhinged Top 11: McTaggart's 2020 Year In Review