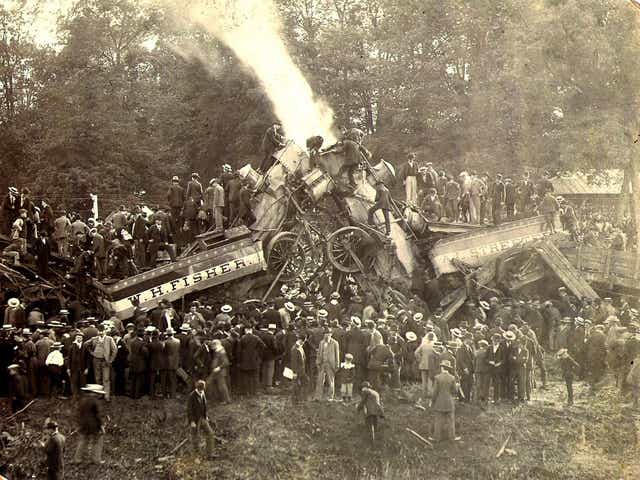 Between 1896 and 1935 a unique and bizarre series of spectator events occurred across America. Those events were the staged head-on collisions of steam locomotives done as profit-making spectacles. Starting in earnest during September of 1896, there were hundreds of these wrecks completed with varying degrees of destruction, carnage, and human injury.

You may have heard of the “Crash at Crush” before but you likely don’t know that Crush, Texas was not the first time this had been done. The famed wreck at Crush launched the practice into the national spotlight and proved that the huge undertakings could be as profitable as they were destructive.

In this podcast we examine the people, the places, and the things that lead to this very American activity becoming so popular and why it died a quiet death as a profit making enterprise in the middle 1930s. We tell the story of the times, the trains, and the consequences of taking tons of steam driven steel and iron and pitting it all against good sense and physics to make a dollar.

This is truly an odd tale of profit and performance art.

Hit the image to listen at DorkoMotive.com –

DOA: GM Cuts Funding For Potentially Awesome Nikola Badger Electric Truck - Can It See The Light Of Day? Escape From Powerline Mud Hole In New York! Watch As These Rigs Fight With One Of The Nastiest Bogs We've Seen In A While!