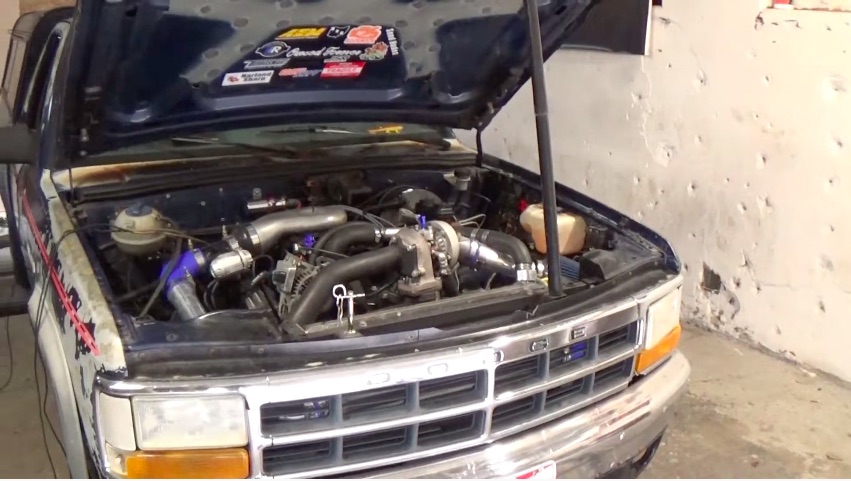 This is what hot rodding looks like right here. True knees and elbows, make it weird and fast hot rodding. You are looking at a weird little beast of truck that no one will ever really see coming at the drags or at the occasional unsanctioned acceleration contest. This truck has been ingeniously hooked up with a single turbocharger attached to its 3.9L V6 engine and that engine is effectively stock. This was a truck that made about 150-175hp at the flywheel when it was new. The engine has 40-60k on it for mileage and the truck itself about 150k according to the guy who owns it and who made this video.

Let’s just say that it is making more than that now. No, it is not making some ridiculous amount but it’s making a ton more than stock and it has to be hilarious fun to drive, especially because the guy has also stuck a five speed stick in it for good measure. The homebuilt turbocharger setup on it will certainly catch people by surprise at the car show or local cruise night but the fact that it is forcing that air into a 3.9L Dodge V6 will really leave them wondering, right?

In a world of LS engines, insane power small block Fords, and boosted hemis all to hell, seeing a guy make some stuff and crutch up an old engine seemingly no one but him cares about is our favorite thing. Period.

Press play below to see this 3.9L turbocharged V6 Dakota make some power!

1970s Perfection: This Motorcycling Safety Film Stars Peter Fonda and Evel Knievel - So Good! Great Save: Watch This Dragster Driver Bail Himself Out At Hal Far Raceway On The Island Of Malta

One thought on “Homebuilt Boost: This Ratty Looking Dodge Dakota Has A Home Turbocharged 3.9L V6 And It Makes Some Power!”