Even More Frame Damage Found On The Gas Monkey Square Body C10 Rebuild. Is A New Chassis In Order? 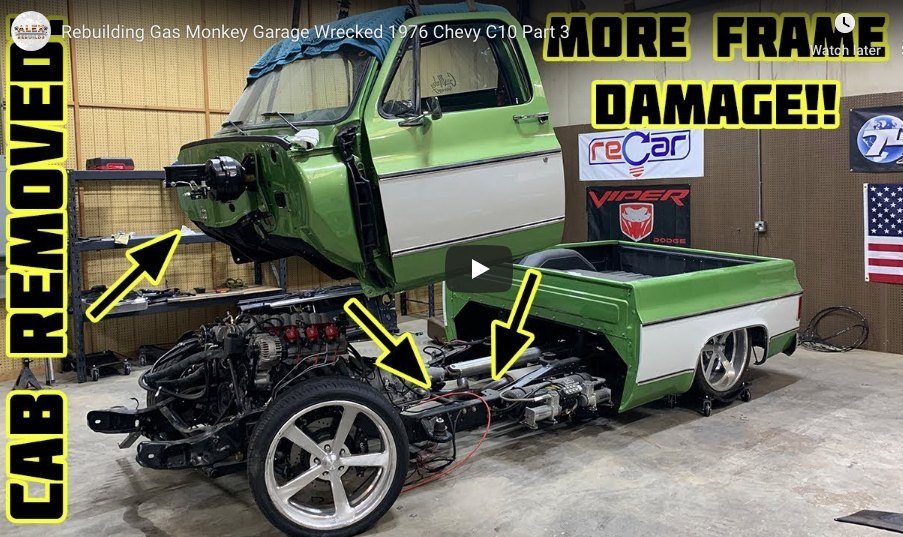 If you missed the first two videos about the Gas Monkey Garage built 1976 C10 that was totaled and then bought at auction to be rebuilt, then CLICK HERE. If you did watch, then check out the latest video below. Here is a recap from the previous episodes: It seems like Gas Monkey Garage builds seem to get beat on a bit more than the norm and sometimes they end up crashed. We’ve seen several of their builds that have been crashed by staff or new owners and yet you know there has to be others we never hear about. Well this 1976 Chevrolet C10 truck could have been one of the latter if it wasn’t for Alex Rebuilds picking it up at auction and vowing to rebuild it. Now let me warn you, Alex is NOT a  hot rodder or racer. He’s a modern car and truck guy mostly, but when he saw the C10 he knew he needed to save it and his excitement over doing so is really cool and we love him for it. This is what Alex does, buys and fixes cars and trucks he buys at auction. It makes you want to go out and buy stuff at the auctions honestly. It’s pretty cool what he does.

There are two videos on the C10, and we’re going to put both of them here so you can check out how this all started. Beware, there are some moments where you might cringe a bit since auctions don’t handle these things the same as us normal folks. But overall the way it gets home and ready to be worked on is cool. Seeing it come apart to figure out how to fix it is even more awesome. Check it all out below and tell us what you think.

The kid has his work cut out for him, and we don’t know what he had to pay for the truck, but I know that there are enough parts in it to make spending tens of thousands actually make sense.

2 thoughts on “Even More Frame Damage Found On The Gas Monkey Square Body C10 Rebuild. Is A New Chassis In Order?”