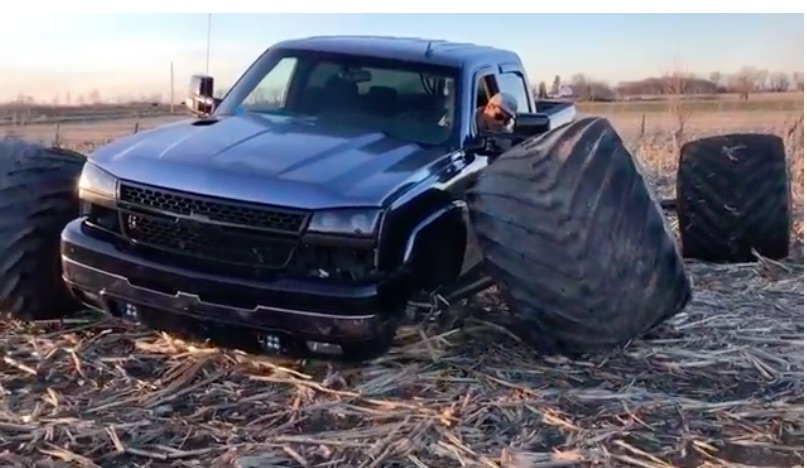 For starters, you need to check your attitude at the door here. If you do not approach this video with the idea that you are looking at a guy knowingly doing something goofy, you’re gonna get your underwear all bunched up over it. Basically we have a kid on a farm with access to his pickup truck, a welder, and some 48″ tall tires off of like a spreader or something. He also has pipe and steel plate at his disposal. So, what does he do? The guy makes 4-foot long wheel spacers to bolt the huge tires to his otherwise stock Duramax. This is the most insane torture test of ball joints (they don’t pass) that we have ever seen. He breaks some pretty indestructible stuff.

There’s no magic or art here, just a couple of kids with a bad idea and the need to execute it. People today like to get all pissed off about this stuff but would we be better off if the guy was making YouTube video game live streams or something? Better to be tilting some weird windmills mechanically than not, we say. Also, before you totally bag on the guy watch the whole video because he has an awesome Ford truck that he cruises after the Duramax rig has, ummm, a problem….a lot of problems. All the damned problems.

We have showed multiple videos of guys taking monster trucks out in lakes and flipping them over, scuttling them, or otherwise sinking them from the 1980s. No one comments on the intelligence of the guys back then. At least this thing doesn’t need to have fish removed from the under seat area of the cab.

8 thoughts on “Dumb Fun: Watch This Kid Put 4-Foot Wheel Spacers On A Pickup With Predictable (And Funny) Results”