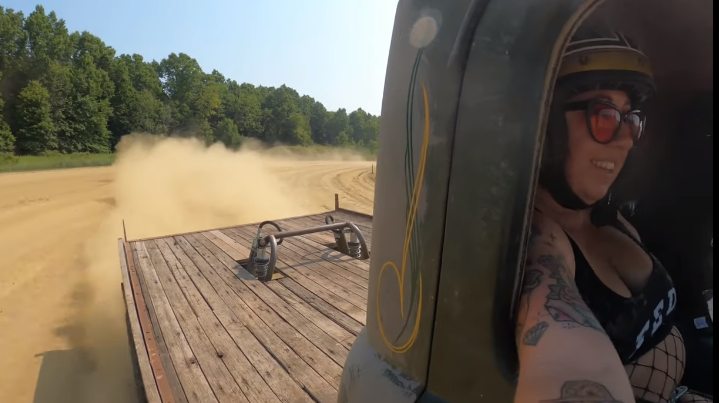 When Josh Dietrich sent me a Content Submission email yesterday, with a link to this video, I started to laugh a little. I laughed because this is what Josh said in his email. “This is my video and I hate to self-promote, but this video fits right in on Bangshift. It’s a home-built turbo 360 powered, stick shift 1951 Dodge dually turning laps on a circle track like a Sprint car. I pushed it as hard as it could take and it was so much fun.” You see, we get tons of people in search of self-promotion, and it doesn’t really bother us if the content is something you BANGshifters want to see, but the description of his dually sounded good and I was hooked when he said he was turning laps on a circle track with it. The only thing that sucks about this video is that I’m not in it!

The video is fun as hell to watch, not because there is much cinematic prowess or anything, but because this Dodge makes all the right noises, has no business being on the dirt sideways, and is making Josh and his lovely passenger giddy like little kids. What’s not to love about that?

Here is the description from the video: READ IT, BECAUSE AFTER YOU DO YOU WILL DEFINITELY WANT TO WATCH THE VIDEO

There’s nothing more fun than sliding a turbocharged, stick shift dually sideways around a legitimate dirt track. Yeah I spun it out, yeah I blew it up, yeah I had the most fun I’ve ever had!