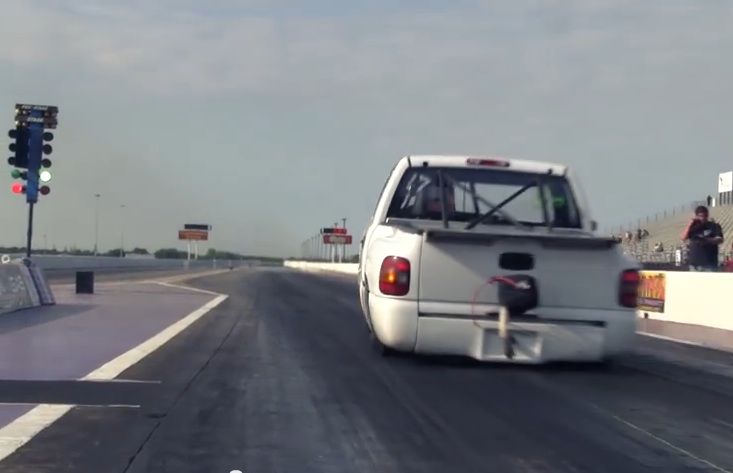 Charles Wickam was at the Houston Performance Trucks Shootout last weekend at Royal Purple Raceway in Baytown, Texas. He reported back that there was some crazy stuff there and mentioned a truck that was running 7s with a twin turbo LS engine combo in it. Well, our pal Javier Padron was shooting video at the track and he caught this thing in action. Let’s just say that it is bending the laws of physics! To shove all this mass and frontal area down the track in less than 8-seconds and at more than 170mph is really impressive. The LS engine combo (we don’t know displacement but let’s guess it is up over 400 inches) has to be making 1500hp or more to achieve this. The crew believes this to be the quickest and fastest LS powered full sized truck in the country and we’ve got no way to argue against them.

Now for the fun part. You need to stick around to the end of the video to see why the truck all of a sudden appears with a brown door and specifically WHERE that brown door came from. This is as old school drag racing as it gets and these guys totally have the right attitude. This seems like a real “get it done” type of crew and work on this truck has surely paid off. When you see the under hood situation you’ll crack up. This is not a mega dollar piece. They have a junkyard alternator in there and some really basic stuff managing all this power. Also, dig how they have the lid of their Holley intake mounted. Awesome!

PRESS PLAY BELOW TO SEE THIS THUNDERING BEAST WORK!

RideTech Launches "RideTech Nation" Program Where You Can Get Paid To Win Running RideTech Components Scrapple, Your Guide To The "meh"-worthy News: VW Trucks, Night-Blind Panthers And More!

One thought on “Behemoth: Watch This Full Sized Chevy Truck Run 7.70s At 170mph Plus With A Twin Turbo LS Engine – World’s Quickest?”