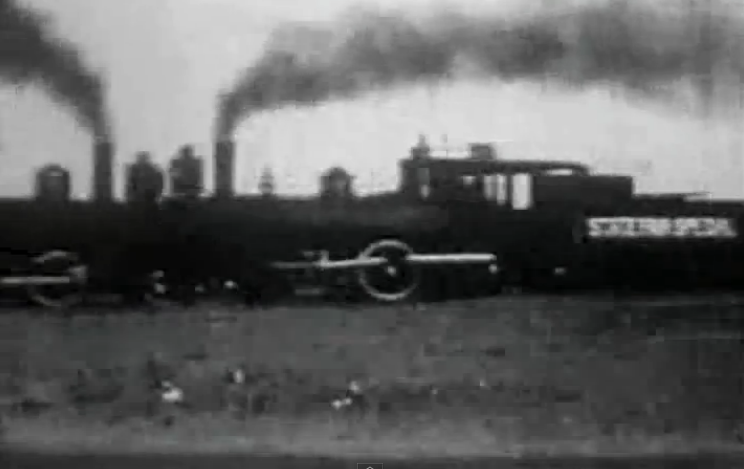 There’s something ingrained into the DNA of human beings that has forced us and continues to force us to be enthralled with wrecks, crashes, and carnage. You see a fair bit of it here on BangShift because often the video is compelling and it is typically amazing stuff to watch, especially when the occupants of the crashing vehicle manage to walk away unharmed…or relatively unharmed. As proof that this is not a new thing, we’ve gathered up several videos from the turn of the 20th century that show head on steam engine collisions that were used as massively popular spectator draws at fairs or on rural train tracks that promoters were able to rent control of. Make no mistake, these were the largest spectator draws of their time. Tens of thousands of people would show up to see a pair of tired old steam engines run full tilt at each other and then end up in a sort of grisly mechanical embrace.

The first one of these spectacles was set up by a man who carried the appropriate last name of Crush. William George Crush was a railway executive at the time and depending on who tells the story, he either needed a way to raise capitol or he had a surplus of old engines that were needed to get knocked out of service. Crush came up with the idea of having the first staged head on crash and to add to the whole package he even created the fictional Texas city of “Crush” to market his event which he called, “The Crash At Crush”. In 1896, more than 100 years before an internet would be conceived, before telephones were around, and depending largely on word of mouth, Crush’s event drew the largest crowd ever assembled for anything in the state of Texas up to that point. This was New Year’s Eve, The Super Bowl, and the Indy 500 all at once. Crush had the two doomed trains tour the state for months, promoting the event and getting the word out.

He built a special track parallel to the main line to prevent the possibility of a runaway train on the main line after the wreck. When the time came, the two trains were fired up, the engineers locked the throttles open and jumped out, sending the two locomotives on their final ride. The trains met at 45mph and then things went horribly wrong. Instead of just sitting in a big mass of steam and iron, the boilers exploded and blew pieces (we have read as large as half a drive wheel) hundreds of feet into the sky, which then came back down on the crowd. Three people were killed, lots were injured, and believe it or not, nothing was really made of that. When the dead were carried away and the wounded tended to, the crowd descended on the wreck and posed for photos on the ruined engines Famed musician Scott Joplin was there and even wrote a popular song about the event. As the story goes, Crush was fired immediately after the incident and rehired days later when the railroad never got any sizable public backlash after the deaths of the spectators.

Promoters being who they are, the potential profits from huge crowds certainly outweighed the fact that a couple of spectators could meet their end and one of the weirdest fads in American history was born. Staged train crashes were used during the famed “Scopes trial” with one train painted with the word “EVOLUTION” on it and the other painted with the word, “FUNDAMENTALISM” on it. They were wrecked at state fairs all over the country. There is video below of a pair of locomotives getting smashed at the 1913 California State Fair. By the time that the ‘teens and twenties had rolled around, the engines being destroyed were far faster ad more powerful than the ones that Crush had used so speeds were ranging from 70-90mph before impact. Hell, the US government staged a wreck with a train painted to read, “Old Man Depression” running into a train painted to read “NRA” which was the “National Recovery Administration” at that time. It is tough to pick a winner in that battle as both trains were mangled. It seems that the point was lost in that illustration. We had mentioned the California State Fair earlier. While they held their first wreck in 1913, it was not their last. In fact, it was the start of what truly became a yearly tradition at the event. The only reason they stopped having them after 1918 was because of metal shortages leading into WWI. The engines were simply too valuable to crash into one another. If it was no longer a productive unit, cutting it up and melting it into whatever was needed by the Army was more important.

Even into modern times, running trains into stuff is a popular enterprise. Every now and again police will crash a train into a car or truck to keep people on their toes at railroad crossings and a while back we showed you the video of a train crashing into a nuclear container of some sort in Britain at like 90 mph to test the thing’s strength. Despite the fact that there was no television or YouTube during the time these early crashes, a bunch of video exists because film makers could sell it for newsreels and other purposes to make a buck. In fact, we’d guess that the spreading popularity of the train wrecking fad was driven by the newsreels and wild accounts read in newspapers and seen on theater screens across the country.

WE’VE COMPILED A BUNCH OF THESE HEAD ON TRAIN WRECK VIDEOS FOR YOUR VIEWING PLEASURE BELOW, WE’LL GIVE YOU A LITTLE INFO ON EACH ONE – Here’s the 1913 California State Fair wreck video. As you’ll see the trains are painted up, you can see the engineer jump off once the big bastard is moving and the impact is heavy duty. Estimates from smart guys say that the energy release is similar to blowing 100-200lbs of dynamite off.

Here’s the famous US government staged crash between the “Old Man Depression” engine and the “National Recovery Administration” engine. Is there a winner? Yeah, the scrap guy!

Here’s the Fundamentalism VS Evolution crash that was staged during the sensational Scopes trial. The symbolism of the two mighty engines serving as the two sides of this debate crashing into each other is not lost on us, nor was it lost on the people of the day.

Lastly, for the historic stuff, here’s the story of the infamous “Crash at Crush” that kicked off a 20 year span of organized and planned locomotive crashes. These were like titanic and very short term demolition derbies of their day. Many men mad untold sums of money putting these things on. People couldn’t get enough.

Final video, here’s the 1986 British nuclear test where they wail a diesel locomotive into a container that they were developing the handle nuclear waste. The idea was to demonstrate its ability to survive any calamity and protect the public from its contents. This is wild and violent for sure.