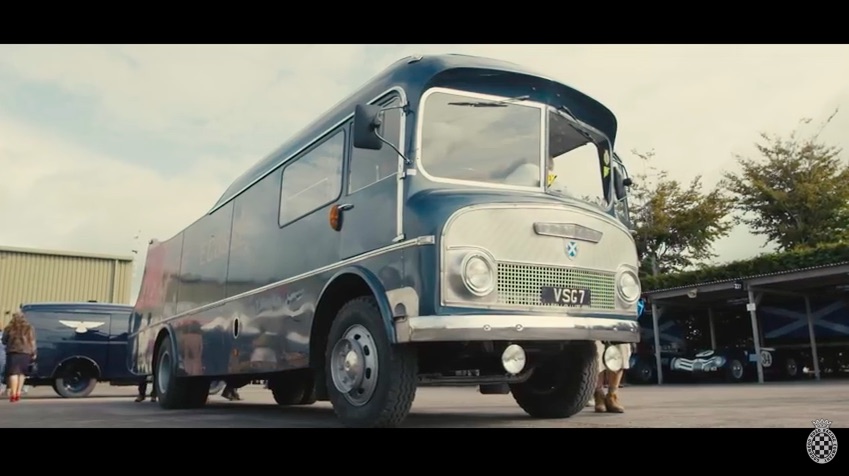 There are race car haulers and then there are RACE CAR HAULERS. This historic piece of iron from Europe is one of the coolest ever made and the video below not only profiles the rig itself but the awesome backstory of how it came to be. While we love our old ramp trucks and stuff like that here in the USA, the Europeans certainly had a design flair for moving their cars around that is pretty much unmatched in the history of racing. From the awesome Mercedes trucks to this one, looking good was about as important as working good for these guys.

So the truck you are looking at here was used by the Ecurie Ecosse sports car racing team that was based in Scotland. It was built off of a Commer bus chassis and the reason that rig was used as the foundation was because of it’s size but also because of the weirdo engine it had. Powered by a three cylinder, horizontally opposed two stroke diesel engine (think three cylinders with two pistons in each hole that come back and forth at each other like fists) that was located completely under the floor, it gave a flat base to build off of.

The truck hauled three killer looking sports cars, all the spares needed, and the crew guys from race to race. The engine was not exactly a powerhouse but according to the current owner, it’ll cruise down the highway at 65mph and keep up with traffic.

This thing is totally awesome and we think it is one of the neatest rigs to ever haul racing cars down the road.

The Mid-West Pro Mod Series At XRP In Texas Is Going Down! WATCH LIVE SATURDAY EVENING! This 1971 Mattel Hot Wheels Ad Rules - The Iconic Toys Were As Cool Then As They Are Now