Demo Derby In Car Video: Watch A Cadillac Take Four Minutes Of Pounding Before It Spits The Bit 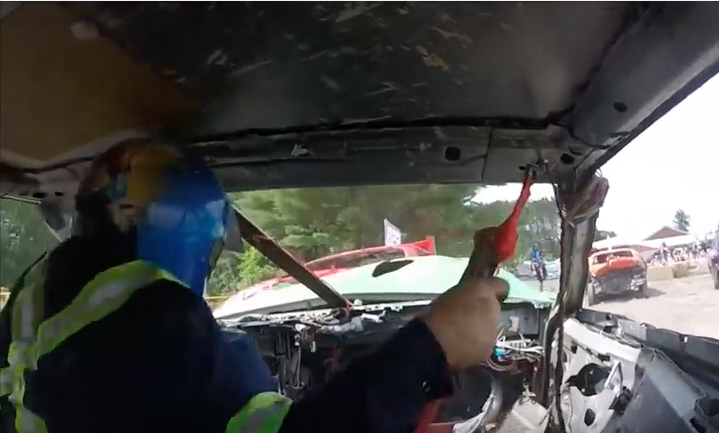 Ahhhh, the demolition derby. Long a staple of county and state fair entertainment it is about as pure a concept as you can get. Bash your brains out and the last man or woman running wins. Being the intelligent animals that we are, human beings have elevated this program to the point that there are some truly enormous payouts at these events and there is a cottage industry around supplying specialty parts, engines, and pieces to serious competitors. The guy driving this Cadillac looks like he’s done this a time or one hundred so he gives about as good as he gets for a while.

While this is a “full-size” contest he may be in one of the larger cars, especially because one of the driver is in an old Neon. Full-size?! You’ll see some strategy being employed here and the way that our hero driver weaves his way through some situations is cool. Ultimately though he didn’t win. Why? He had a mechanical failure and we’ll not give that one away quite yet because when you see what it is you’ll wonder how that particular part was not broken in the first three seconds of competition.

We’re still trying to figure out what the ratchet strap inside the car is for. The driver hangs onto it intermittently and it does seem to have some tension on it but we’re not sure what it is supposed to be doing in there. We dig the fact that the factory shifter has been ditched for what looks to be a simple push/pull lever to move the car from forward to back. By the time the end is near the trans seems like it may be going out on the car….but that isn’t what kills it.