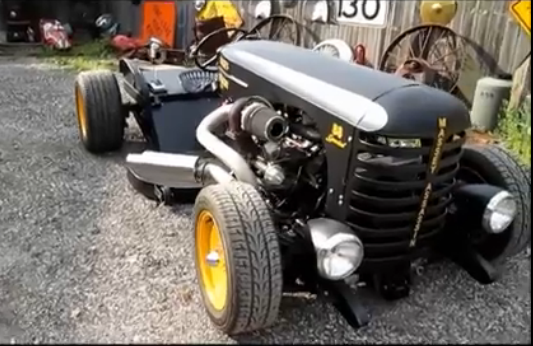 This is just your average, run-of-the-mill 1940s Massey Harris tractors that has been outfitted with air suspension, a twin turbo small block Chevy engine, an overdrive transmission, and is fast enough to blow virtually anything else ever built into the weeds. The seller claims that it is the world’s fastest tractor and while there ain’t a whole lot of “tractor” left, we’re not going to argue with him. You do drive the thing sitting in an on iron tractor seat, so that pretty much seals the deal for us. The “tractor” has a full chassis under it like a car would so for those of you wondering if 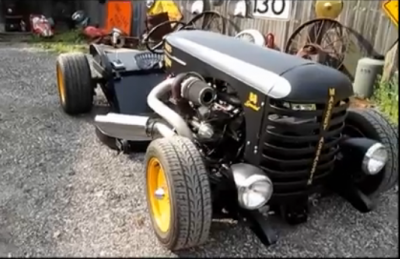 the transmission was a structural part of the equation, it isn’t. We have some videos below of the thing cutting donuts and driving down the road. The one problem that people in many states may have is actually registering the thing. You can get plates for tractors in many states but would the state call this a tractor? Could you register it as a street rod? Part of us see a DMV official stroking out at the fight sight of the Massey Assassin rolling up to get its paperwork sorted.

The builder of the tractor is Ryan Abbot who apparently has a hot rod shop called “Rod it All”. He has built some other off the wall stuff so this tractor is right in his wheelhouse for over the top and creative ideas. Even he admits below that he had to tame the thing down because it was such a handful. In reality there is not a lot of weight there and the engine seems to be able to ignite the rear tires by simply breathing on the throttle. It cuts some of the tightest donuts we have seen anything cut in the history of ever.

Thanks to Shawn Doucette for the tip!

Want to own one of the baddest street rod tractors ever? Well here is a limited time chance to do so. Up for auction is the Massey Assassin. It’s the body of a late 40’s Massey Harris tractor nailed to a full custom streetrod chassis and twin turbo charged chevy engine. The power to weight ratio is off the map, It is built to abuse and will take about anything you can throw at it. So far I have had it up around 100MPH and its very predictable, drives just like a car. I don’t have any quarter mile times or dyno  to prove power or speed, It really doesn’t even matter because you will let off before the car is maxed out. I have had it in several burnout competitions and it is known to bring everyone to their feet. At the shows there is always a ton of people around it. It has no title, I don’t even know if it could be street legal. However I drive it on the road all the time. It has the orange triangle on the back so that helps me get away with a little of the legalities…..hahah, doesn’t help much when you pass a cop going 85 in a 55 though. The Massey runs awesome, I spent a lot of time and money building the engine with good parts and not cheap no name crap. It runs on 93 pump gas just fine, even fires up in below freezing weather and runs good. The only issue is that the trans is an overdrive trans and has not had the wiring done to it yet, so I use low1 and 2 most of the time.  When I first built the car it had a th350 trans with 3000 stall and ran in the double digits for boost, this combo was insane. Way too much power, way too fast. Since then I have put a stock 700r4 trans in it and lowered the boost to around 6 psi. Now you can at least drive it without puckering your but every time you hit the gas. The car also has 4 corner air ride that will let the car lower the frame to the ground. The mower deck is not real, but I tell everyone who asks it is to see if they will look.

Like I said this is a limited time offer. It was not cheap to build and It won’t sell for cheap either. If you want something that you can dominate burnout comps with and be a sure fire hit at every car show, this is it. A true “one of a kind” Specs for the car listed below:

Here’s some video of the tractor in action the link to the eBay ad!

Action Gallery: Flying Mud And Much From Dirty Gras 2014 In Crosby, Texas Mint 400 Race Preview Is The Most Intense Four Minutes Of Off Road Racing Video You'll See