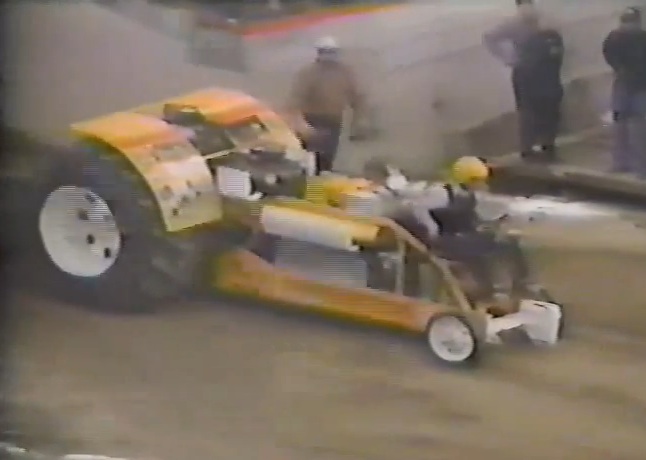 So I am on the bit of a kick for oddball and interesting tractor pulling iron. Yesterday we showed you Lee Pendleton’s City Slicker tractor which pretty much sets the bar for crazy historic pullers but it wasn’t alone. Another cool werido was a machine called Rambunctious which was campaigned in multiple forms by a guy named Milt Bergman. In this video, taken from the 1980s show “The Superchargers” we see Bergman competing at the Rosemont Horizon arena outside of Chicago, Illinois. During this time in its life, the tractor was powered by a naturally aspirated Allison V12 airplane engine that was also supported by a pair of Oldsmobile engines, each of their own displacement apparently.

The most jarring thing about the tractor is Bergman’s seating position, which is literally on the tip of the spear. With his feet directly over the front axle, Bergman had a front row seat to what was happening with the tractor as it went down the course. We’re not sure the rules would even allow such a seating position today but back then they were pretty much wide open.

This video is cool because not only do we get to see the tractor pull, we get to hear the late Jan Gabriel on the call and then there is a follow up interview with Bergman after he made the hook. He’s pretty well convinced that his combo is down on power as compared to everyone else’s and that is why the machine did not perform as well as he would have wanted. We’re not sure we can disagree. With multiple blower engines on some of the tractors, his may have been on the weaker side. It was not weak in creativity, though!

Lastly, the tractor ran in different forms over the years and perhaps the most bizarre of all was with six Olds V8 engines laid out in two stacked rows of three! Think we’re kidding? Look at this : 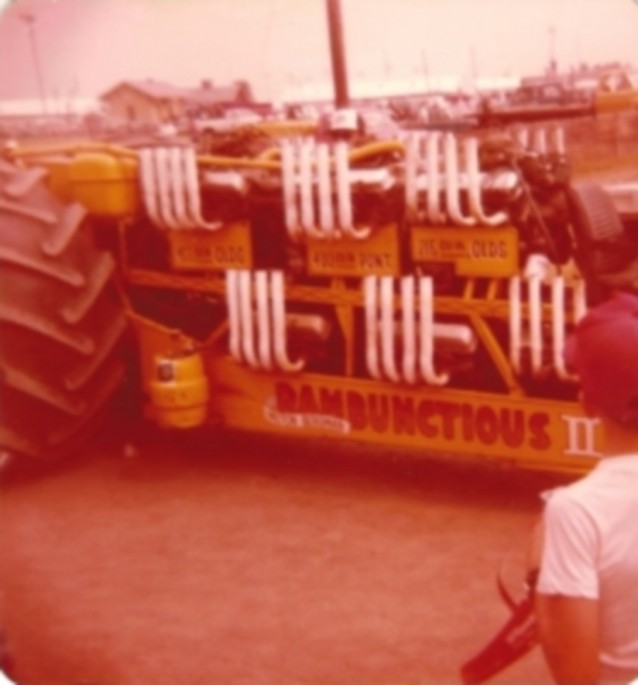 PRESS PLAY BELOW TO SEE MILT BERGMAN’S RAMBUNCTIOUS IN ACTION