Pucker Up! Watch This Massive and Loaded Mining Haul Truck Spin Out On A Slippery Road 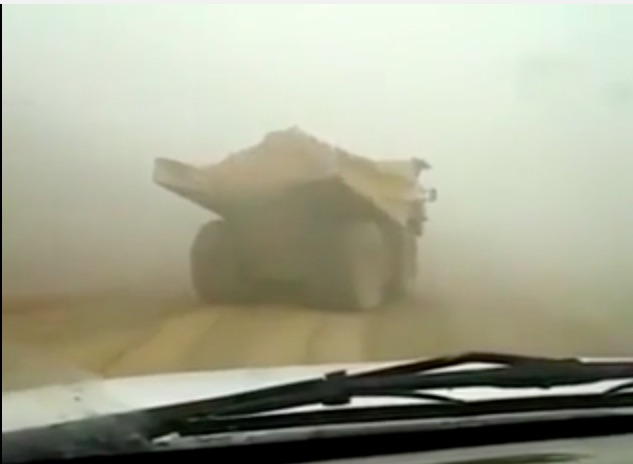 There’s something totally wild about the idea that a vehicle as large as this mining haul truck could be so lacking in traction that it could spin an unintentional donut right in the middle of a road but as this video shows, it is totally possible. You are going to watch a loaded truck from the perspective of a mine safety official who is driving behind it and apparently monitoring the condition of the road on which the rig is traveling. The speed is low, the driver of the haul truck is not doing anything wrong, he’s just carefully doing his job.

As the truck approaches a corner you’ll see the back end step out to the left and the driver holds what appears to be a pretty steeply angled drift for a decent amount of time. The truck then rotates around in the other direction with swiftness and despite the driver’s best efforts, he cannot save it. The whole truck spins out and ends up facing the safety guy who immediately hops on his radio and tells whoever is listening that the remainder of the trucks needs to be parked because of the conditions.

We can’t imagine what it felt like to be at the wheel of this one when it went around. Because the drivers are like 10ft in the air, the first thought was likely to be afraid that it was going to roll over. That would have been a nightmare! The other side of this one is that the guy my be so experienced that this isn’t the first time he’s (or she’s) looped one in the muck.

BangShift Project Power Laggin' Update: Fixing Our Fuel System Before We Go Atomic! Alex Taylor's Quest For The 6's 1955 Chevy Project Is Legal! They Got Their NHRA Chassis Cert!