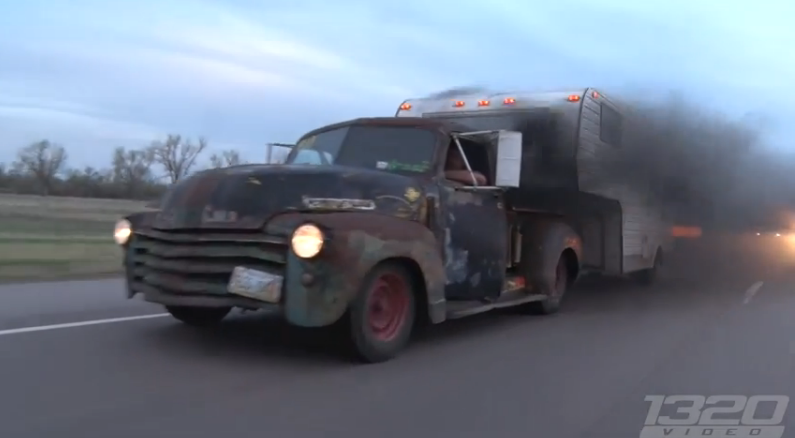 As I have mentioned a couple of times this week, I’ve been hanging out in Denver with 10 of the toughest street legal diesel trucks in North America and hosting the action as they have been put through seven feats of strength, agility, efficiency, and acceleration. Like last year, the Diesel Power Challenge showcases the two sides of the diesel performance world. One one side there are 7,000-8,000lb trucks running deep 11s at a mile of altitude and on the other side those same trucks are knocking down 20-30mpg on a mileage loop into the Rocky Mountains. I mention this because the truck you’ll see in then video below perfectly captures both sides of that world as well.

Kyle at 1320Video found this truck at a diesel drag race in Nebraska and after he laid eyes on it, there was no choice but to feature the truck both racing on the strip and cruising down the highway. The ratty looking 1947 Chevrolet is powered by a 1996 7.3L Ford Powerstroke which has been hot rodded mildly to produce 550+hp and over 850 lb/ft of torque in the nose of the widened cab. To us the truck is ultra cool because the owner not only has something he hammers on at the strip but something that is functional enough to drag a big gooseneck hitch style camping trailer down the road while getting better mileage than some empty SUVs!

There are a couple of fun “rat rod” elements on the truck like the gas pump nozzle permanently jammed into the side of the bed to mess with people, the inviting button on the rear of the truck that fires off a deafening horn, and the fact that all the paint has long since left the ranch, so to speak. The eight inch exhaust stacks are huge and they belch some good smoke when the throttle is laid flat on the floor.

You may not dig the styling but you have to respect a rig that is this useable, fun, and free of attitude. It is fast enough to be fun, tough enough to be used for work and play, and efficient enough to keep your bank account from being an IV to the oil companies. How can you hate on that?

25 years ago today, a guy with a Cessna and an AK-47 held the city of Boston hostage Holley Introduces New Line Of Mighty Mite Electric Fuel Pumps - Perfect For Your 300-400hp Carb'd Ride