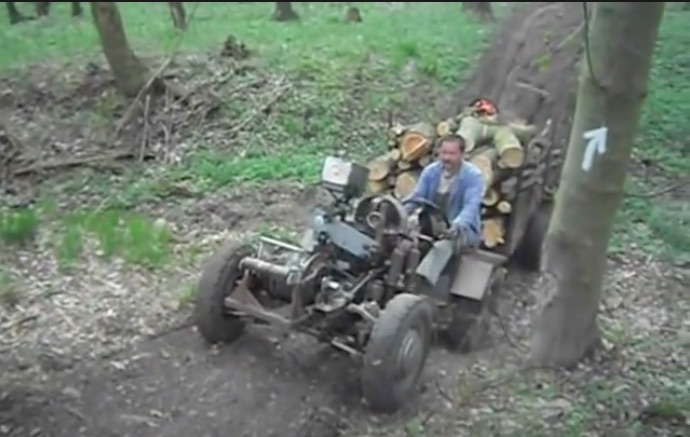 It was Archimedes who said, “Give me a place to stand and a long enough lever and I will move the world.” It was this Russian guy who said, “Give me some JAWA 250 dirt bike parts, a car transmission, and enough gears and chains and I will haul my firewood out of the wilderness.” He may not have said that exact thing but we know that when he was building this incredible and wholly functional little tractor he had a plan in place and a clear understanding of how gearing was going to be his best friend in this endeavor. Chris Eldred sent us this video and he knew we’d be as captured by it as he was. This thing really is something.

The one horrifying part of the video is when the dude makes a running start at a steep hill that he knows he will not make it over with his load of logs. He goes as far as he can go and then employs his bad ass gear driven winch! The horrifying part is that he is using a minuscule cable which looks to be tied off around some sort of high tension electrical pole. There’s some pretty good weight on that little cable and if it snaps, it is going to cut the guy to ribbons! He doesn’t care and the cable doesn’t either but that is a movie that could end badly.

This is just an amazing little working vehicle that uses an underpowered engine but loads of mechanical advantage through gearing to get its work done. We’re in love!

3 thoughts on “This Homemade Russian Tractor Is An Incredible Mashup Of Dirt Bikes Parts, Chains, Jack Shafts, and Win!”