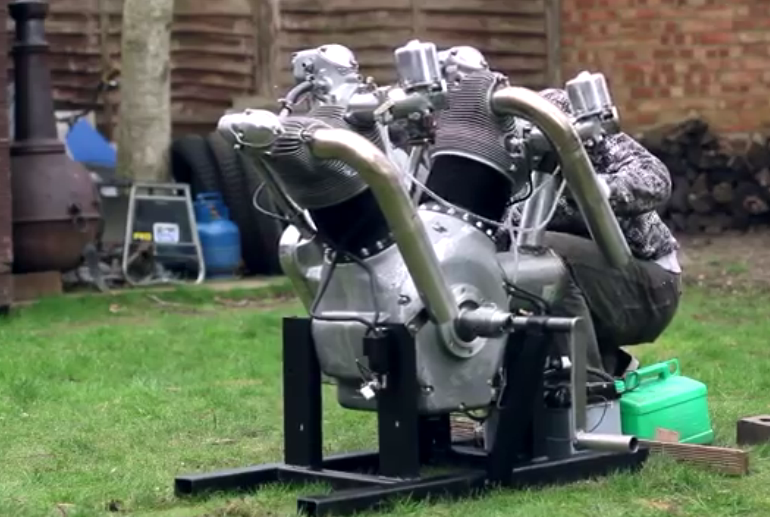 Life is all about perspective, right? When we talk about a 300ci V8 engine we’re talking about a little small block but when you apply that size to something with only two cylinders you are talking about an entirely different kettle of fish. This V-twin engine was built by a guy named Allen Millyard and it uses two Pratt and Whitney R1340 cylinders which are mounted to a completely custom built crank case. In fact, everything else outside of the cylinders including the crank and connecting rods were made by Millyard. This engine was actually built with the intention of installing into a custom motorcycle and we’ll have video of that motorcycle actually going down the road with this power plant making the noise tomorrow. The engine is a thing of beauty for sure and it runs like a Swiss watch. At idle is sounds like the meanest thumping Harley you have ever heard but when the throttles are cracked open…look out!

One of the things that caught our eye was the shape of the tubes that the pushrods live in. With the gentle bends they have in them, the pushrods themselves must be oddly shaped to work in their confines. The whole thing is a piece of literal mechanical art and we’re kind of geeking out over it.

The one funny part of the video is when the engine is hauled outside and literally kick started. The kicker winds up and gives it a good one , firing the engine on the first hit but the crank that he kicked (which is as robustly and nicely made as the rest of the engine) rotates around and wails the guy in the shin. OUCH.

This engine is a marvel and you’ll love seeing it working tomorrow for sure.

Backwards Drag Racing Video: We Found One Thing Suburbans Suck At All In One Run: Watch This 1969 Barracuda Pull A Wheelie, Get Sideways, And Spin On The Same Run!