Video: Why You Shouldn’t Blow Donuts in Your Lifted Jeep 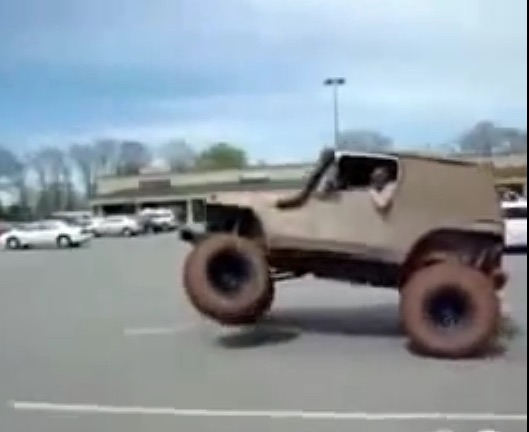 Modern automotive suspensions are awesome and complex, but the components and engineering that go into the suspensions of serious off road trucks are totally wild. Their abilities to bend and flex, allowing the vehicles they underpin to stay on whatever obstacle they are climbing and defy the laws of physics are legend. Unfortunately, there are some drawbacks, as the owner of this Jeep discovered.

As the driver begins to feed the Jeep throttle, watch the thing lean and articulate. It three wheels almost like it is climbing an invisible RTI ramp, before going turtle in a boring parking lot. For some reason, seeing an upside down Jeep seems natural in the woods, not so much in the parking lot.

A cursory knowledge of physics, center of gravity, and just some common sense would have prevented this guy from mashing the side of his Jeep to piece, but at least he ended up with a fun story, right? We’re guessing the cops were called to the scene on this one and depending on how “sympathetic” the officer was the guy’s day either maintained its level of badness or go worse with a citation, fine, and a lecture after the dude probably already felt dumb as a stump.

So there you have it. A lesson in science, engineering, and a display of dumb. If your kid has a lifted Jeep show him or her this video as an example of what not to do…ever.

2 thoughts on “Video: Why You Shouldn’t Blow Donuts in Your Lifted Jeep”