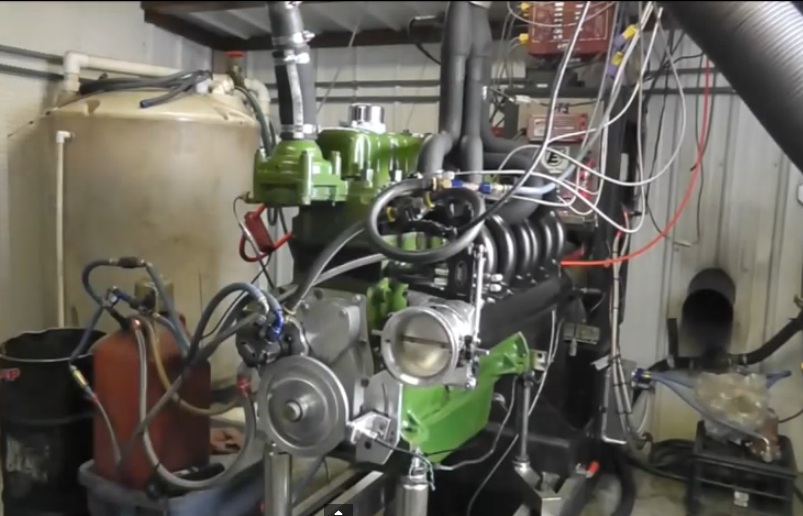 When one thinks of an antique tractor pulling engine thoughts normally wander to updraft carbs and old oil and grease seeping around ancient bolt heads. If that’s what you actually think that these guys do, you’ve never been around one of the cool and very hot rodded tractors that can be found at the pulls, even the antique themed events. This video, made by the guys at the Williams Precision Engines shop depicts an old Oliver tractor inline six engine with fuel injection, a crazy looking tubular intake and header, and who knows whatever else done to it internally screaming out more than 400hp and more than 560 lb/ft of torque naturally aspirated! Perhaps even more impressive is the fact that the flipping spins to more than 4,500 RPM during the pull. This was an engine that probably had a maximum operating speed of about half that when it came from the factory.

We’ve been trying to dig up what the displacement of this engine would have started as and the best we can tell is that it likely began life as a 283 Waukesha before being hot rodded to within an inch of its life. If the header and intake didn’t give you an idea that this was serious business, the billet machined front cover may have been another good tip off. Like at Bonneville, these old tractor guys figure out ways to get ungodly power from engines that the rest of the world consider “obsolete”. How many guys claim that their 350 makes 400hp and it makes about 230? This guy has a freaking tractor engine that was produced when WWII was still a fresh memory and it is making more torque than a flipping 500ci Caddy mill!

If you think that tractor pullers are a bunch of hay seed country boys that like to say, “aww shucks” a lot and don’t know what they’re doing…..you are wrong!

PRESS PLAY TO SEE ONE OF THE MOST SHOCKINGLY POWERFUL OLD INLINERS WE HAVE EVER SEEN ON THE DYNO!