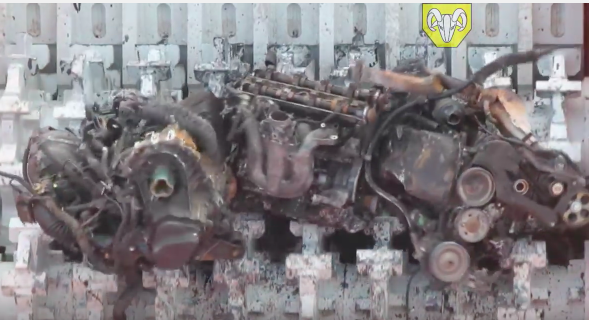 The metal business is pretty interesting. After all, at the end of the day the raw value of the stuff in a junkyard is its weight in metal. The stuff gets sold, loaded onto ships, smelted down in China and made into stuff that gets shipped back over and the process begins again. In the middle of that process is the need to take cars, trucks, engines, bikes, and whatever else and turn them into some sort of manageable form that can be stacked, loaded, and moved in an efficient manner. Enter the metal shredders.

We have showed you videos of these things eating up cars before so their strength and power are no surprise but there is something really cool about watching them eat raw whole engines. We’re guessing that this video was made in Europe because all of the engines appear to be of the smallish four banger variety. Trust us when we tell you that the displacement of the engine does not detract from the entertainment value of seeing it mangled any way.

Out favorite moments in this video are things like watching torque converters still bolted to engines just get mashed, seeing stuff like camshafts escape for a precious few seconds before being sucked into the vortex of hell known as the steel rollers, and the raw sounds that the stuff being destroyed make. It is like a shattering, crunching, bizarre noise that we enjoyed…probably too much.

You know the drill. Press play and put on your safety glasses!

New Product: The Suspension Geek Tow And Jack Plate Is The A Gift From Heaven For Camaro And Nova Owners Video Bonanza: Here's The Right Way To Take Down Smoke Stacks