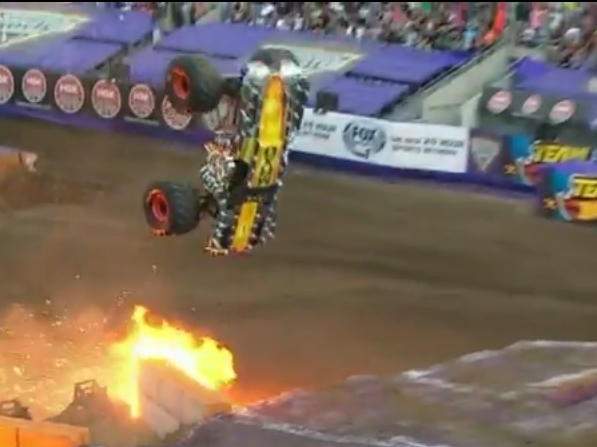 (By Jason Mazzotta) – Tom Meents has forever been known as a wild man behind the wheel, from his early days in mud trucks throughout his time in the Maximum Destruction monster trucks and today where he drives the Max D truck. As a fearless driver behind the wheel he has no problem laying it on the line and destroying a truck to receive a perfect score in the freestyle only to come back and win the race. He has pulled off some of the most incredible freestyle moves, where it looks as if he may be done but is able to keep it running and bring the crowd to its feet. It was incredible when he completed a backflip, but in this video he defies the impossible once again and pulls off the first ever front flip in a monster truck!

Meents lines up the jump, hits the ramp, and nails the first ever front flip, rotating just enough to land on a combination of the rear tires and back of the truck sending the truck into another front flip/roll landing on all four tires. It is quite a sight to see a 10,000 pound monster truck defy physics and pull off a front flip and stick the landing.

Check out the first ever monster truck front flip from multiple angles below: