Brand Loyal: Tommy Youman’s Twin Turbo GTO Judge Has A Billet Pontiac Engine And It Is Ready To Take On The World – Video 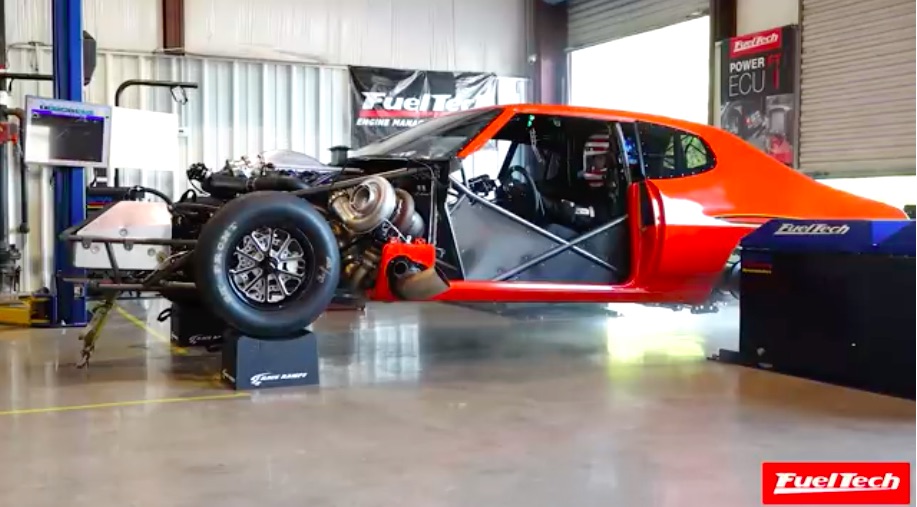 If you are a regular follower of the small tire drag racing scene Tommy Youman’s name is not entirely unfamiliar to you. He has run a few DuckX productions races down at South Georgia Motorsports Park in his naturally aspirated 1964 Pontiac GTO. As a life-long and dedicated Pontiac fan, the ’64 was running a big Pontiac mill based off of an aftermarket block and all the good stuff that you would expect.

Youman’s newest car, this stunning GTO Judge has steel roof and quarter panels, the nicest chassis we have ever seen, a billet, 505ci twin-turbocharged Kauffman Pontiac engine, and the highest tech engine management and fuel delivery that exists on the market today. Simply put, this is the most powerful Pontiac powered drag racing machine ever built. Therein lies the rub with this video. We’ll tell you right now that you will not be seeing or hearing horsepower numbers here, just a smiling Youman making the declaration that this is the most power Pontiac powered machine ever. We do not doubt him.

We’re not totally sure where Tommy is going to run this car but we expect to see it at SGMP and when we do, we’ll be drooling on it in person. It does not happen often, but occasionally race cars transcend their sport or particular arena to become machines admired by far more people than just others on a drag strip or whatever the medium is.

You do not have to give a rip about the drags to understand that this car is so freaking awesome, you’d kill to own it.

Enjoy the video and just understand the lack of horsepower numbers. How much does it make? A freaking ton.

Classic Tractor Video: In 1973 White Hired USAC To Run A Showdown Between Tractor Brands - This Is Awesome The Salt Beds Of Salduro: The History Of The First Speed Trials At Bonneville

8 thoughts on “Brand Loyal: Tommy Youman’s Twin Turbo GTO Judge Has A Billet Pontiac Engine And It Is Ready To Take On The World – Video”