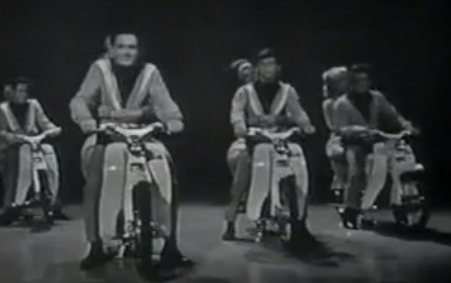 I know what you’re thinking, “What is it with Lohnes and all the weirdo old songs?” Frankly, I have no good answer to that other than the fact that these tunes are super listenable, catchy, and fun. The Hondells were another Gary Usher creation and this tune was penned by Beach Boys notables Brian Wilson and Mike Love. The song is an ode to the little Honda motorcycles that were selling like hot cakes in Southern California during the early 1960s. While it took a while for Japanese to get a good foothold on US soil, motorcycles and scooters were a different story. Once the sun soaked west coasters got a taste of the zippy and cheap little bikes they spread like wildfire across the country.

Never one of miss a money making opportunity, Usher had his assembled band record a whole album of Honda related songs and this tune, Little Honda was the most successful ditty on the record, ending up at number nine on the Billboard charts in 1964. The Beach Boys also released a version of this song in 1965 and it made it to number 65. Ironically, most people seem to remember the Beach Boys version despite the fact the Hondells had more success with it. I guess that’s probably due to the fact that the Beach Boys have released a couple dozen compilation albums over the years.

No more surf tunes for a while after today…I promise.

PRESS PLAY BELOW TO HEAR THE HONDELLS SING THEIR HIT SONG LITTLE HONDA!

One thought on “BangShift Daily Tune Up: Little Honda – The Hondells (1965)”