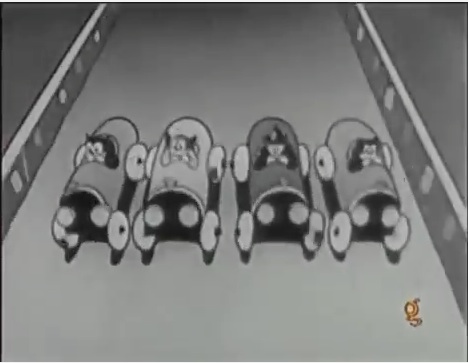 Now here’s a flashback if there ever was one. In the late 1990s, Cartoon Network would fill a break in-between shows every now and then with a spot they called “Groovies”. The premise was simple: good music overlaid with cartoon footage. One band that got featured twice was Soul Coughing, a band that took the term “alternative” and proceeded to apply it to any and every other genre possible, including rock, hip hop, jazz, and even drum n’ bass music. Singer and writer Mike Doughty brought a smooth, almost stoned approach to wordplay, while Mark Degli Antoni worked the keyboards and some of the most interesting samples heard on the radio. Soul Coughing has a strong cult following, but they did have three solid hits off of their final album, 1998’s El Oso: “Circles”, “Super Bon Bon”, and “Rolling”.

“Rolling” and “Circles” were scooped up by Cartoon Network and became two of the most iconic videos the network ever ran. For “Circles”, they used walking animations from The Flintstones, but for “Rolling”, they used the 1932 Betty Boop cartoon “Betty Boop’s Ker Choo”, which is set in a period-correct automobile race in the style that only Miss “Boop-oop-a-doop” could have. Slightly reworked to fit in-time with the bass-heavy music, this “Groovies” clip was a great way to kill a few minutes of time while waiting for another round of Roadrunner vs. Coyote. Soul Coughing would break up in 2000, and Doughty would go on to a successful underground career after dealing with some demons. He has referred to his time in Soul Coughing as a “dark, abusive marriage” but for a slacker kid in the late 1990s who liked a bit of funk playing, it didn’t get much better.