This CTS-V Coupe Review From Consumer Reports Isn’t The Yawn Fest You Expect – They Just Drift It! 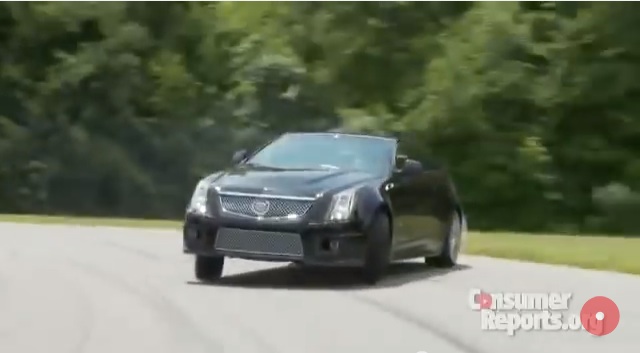 The only way I ever thought I’d put a Consumer Reports video on BangShift is if it involved a late-model vehicle that was prone to random and catastrophic explosions or was recalled to within an inch of it’s life. The 2010 Cadillac CTS-V Coupe was neither. Sure, it looked a little weird from a couple of angles, but overall the wedge-shaped Caddy was as much of a stomper as the sedan. Given to someone like Motor Trend, Car and Driver or Top Gear, and you’d expect a thorough wringing-out of the car for a review. Hand one to Consumer Reports, and normally you’d expect complaints about the coupe body, how intrusive the V8’s noise was into the cabin, how the firmer suspension of the CTS-V wasn’t as desirable as the standard car…y’know, boring crap for people who don’t give a rat’s backside about cars in the first place.

Somehow, the CTS-V managed to bewitch this presenter, because all he does is straight-line burnouts and drifts. I’ve driven that generation CTS-V and it’s a very capable car, but you know that once his superiors saw the film on YouTube he was called into the office, was forced to hand over the keys and spent the next two months driving a silver and beige Hyundai Elantra as corrective punishment.

The 2015 Houston Performance Trucks Shootout - Here's Our Last Blast Of Action From The Race Here's 15 Wild Wheels Up Launches From Memphis - Which One Is The Craziest?