Abandoned Chevy Nova Rescued After 24 Years! Is It Worth Saving? 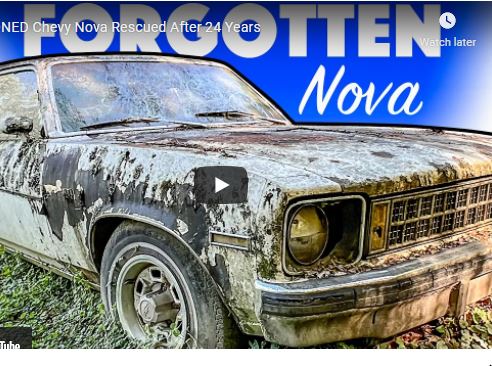 When Tommy goes hunting for hot rod projects, you always know that something cool is going to follow him home. In this case he wasn’t hunting as much as he was taking advantage of a great deal with little information about the car, its history, or anything else. It’s rough. It’s ugly. But is it worth it? Watch.

I just love rescuing an old car that’s been abandoned and forgotten. I had ZERO knowledge about this car, aside from the fact it had been sitting a LONG TIME. I also didn’t know what year it was. And I didn’t know what engine it had in it, or how long it had been off the road. I bought the car based off of a little picture on my phone, so it was hard to tell just how rough it was. It belonged to a local man, who drove it in the 1990’s and recently passed away. His daughter was cleaning out the back yard and garage, and a mutual friend reached out to me to see if I knew of anyone interested in buying a junk car and an extra engine.

I took a gamble and agreed on a price before actually going to see the car and engine. As it turns out, the gamble was a good one, even though the car is ROUGH. Real rough. I was thrilled to dig through the glove box and find out that it was bought NEW right here in my hometown of Dayton, TN. That alone is cool, but the Lynyrd Skynyrd cassette tape really sealed the deal for me. I can only hope that the wiring for the cassette player hasn’t been chewed up by whatever has been living in this thing for the past 24 years.

The mystery small block Chevy engine has lots of parts with it (I’ll make another video about how to decode it, so we can figure out if it’s a ratty 305 or a hot 327. I ended up making an offer on a ’70s Honda CL350 to throw in as well. All together, I think I’ll come out ok on the deal, and I’m excited to see if I can get this abandoned junk running again. Is the Nova too far gone? You’ll find out more in a future video, but for now let’s evaluate this abandoned back yard find, and drag this stuff home so we can take a good look at it.

1988 Chevrolet Suburban Budget Transformation! Fresh Stance And Wheels For The Old Squarebody Burb! First Bath In Over A Decade! This All Original Ford Pinto Station Wagon Is A Time Capsule