Finnegan’s Garage: This Old Chevy Hasn’t Run Since 1974, But That’s All About To Change! 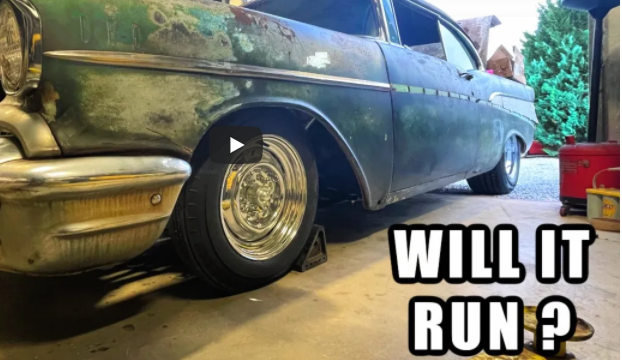 In this episode of Finnegan’s Garage, Newbern actually gets his 1957 Chevy running for the first time since 1974! This thing is epic, was a totally accidental roadside find, and Newbern is wasting ZERO time getting it back up and running. There is no doubt that this dude is ready to have another ’57 Hot Rod and this one is the perfect one to start with. The story behind it, the work it needs, and the parts he’s acquired make this one hell of a build that we totally support. Check out all the info below?

Here is the video description from Finnegan:

Episode 165 of Mike Finnegan’s Garage gives an exclusive look at the newly renovated 1957 Chevy Bel Air that David Newbern bought during our cross-country road trip. We drove from Georgia to California and back in Lincoln Hawk, a Chevy Kodiak enclosed ramp truck. On the way back home we stopped in Big Spring, Texas, and Dave bought this rough but really cool ’57 Chevy, which had just the right amount of patina on the body. In this episode you’ll watch as he restores the chassis of his other ’57 Chevy using parts from Speedway Motors and then slides fresh chassis under his newly acquired body. Powering the car is the original 454ci V8 Big-Block Chevy engine take from the OG Roadkill ramp truck and that is backed by a Silversport Transmissions six-speed Tremec manual gearbox kit. The Chevy is also wearing one of Blasphemi’s original sets of Coker chrome steelie wheels! Check it out! Want to support this channel? Shop https://www.fsmgarage.com and buy some merch. Every dollar you spend goes toward making more bad financial decisions by us involving crappy, old cars. lol Thanks! -Finnegan

Goliath Is Back! Daddy Dave Tests Goliath At Thunder Valley After Three Months With It! Race Week 2.0 - Day Two With Motion Raceworks - Ennis, Texas - Dougs First Ever Wreck / Andy Cruises To a 5.18