The Lincoln Commander Cody Warned You About: Nine Seconds From A Turbo Coyote! 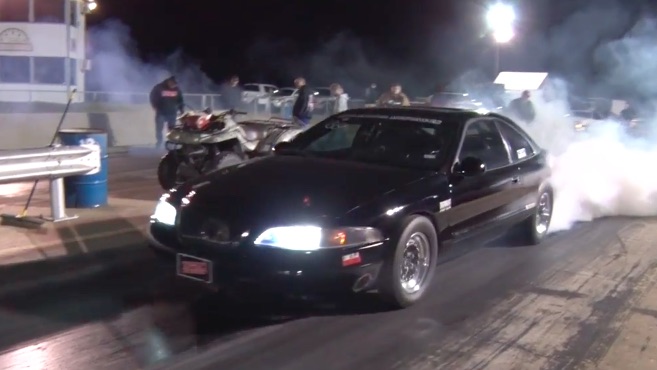 The Lincoln Mark VIII was a very unique car for the 1990s…it had it’s own platform that was loosely based on the MN-12 platform (Ford Thunderbird/Mercury Cougar), it was only a little bit smaller than the full-size Panther platform sedan, and had an independent rear suspension. It had a sinister look in the right color. Gold or beige or pearl white makes it look like the personal ride of some silver fox, but when it’s in full-tilt black menace, the monochromatic look and the slit headlights and taillights look like the car has anger just waiting to explode, like the guy in a boardroom meeting who is one stupid statement away from letting the big boss know exactly what he thinks, in surround sound and with crystal-clear R-rated language. Sitting quietly, this particular car has an intimidation factor that sits right up front: just behind that waterfall grille is a freaking massive 88mm turbocharger that is force-feeding a Coyote 5.0 V8. Ain’t missing that one there, chief. It’s not a gutted car, either…the interior is there (fortified with extra gauges, yes, but it’s still got the interior) and there isn’t any massive scoop or wing showing off the power. It’s smooth, it’s sleek, and it’s solidly fast. The Mark VIII isn’t the most memorable Lincoln ever created, but you almost get the hint of a cobra, hiked up with fangs bared when you see those thin headlights and that turbo. It’s a call-out…what are you gonna do? I’ve got plenty to bring to the table. We’ve seen this car at events before, and it’s biggest draw is that it’s a Mark VIII that is brutally ready to go for any challenger.

Watch This 427FE Powered 'Stang Destroy The Field At A Road Race Win A Car You'd Really Want: Holley Is Giving Away The 1966 Buick Special Convertible That Started Roadkill

2 thoughts on “The Lincoln Commander Cody Warned You About: Nine Seconds From A Turbo Coyote!”