Unhinged: Mitsubishi’s Sad Fate Summed Up In One Purple And Green Mirage 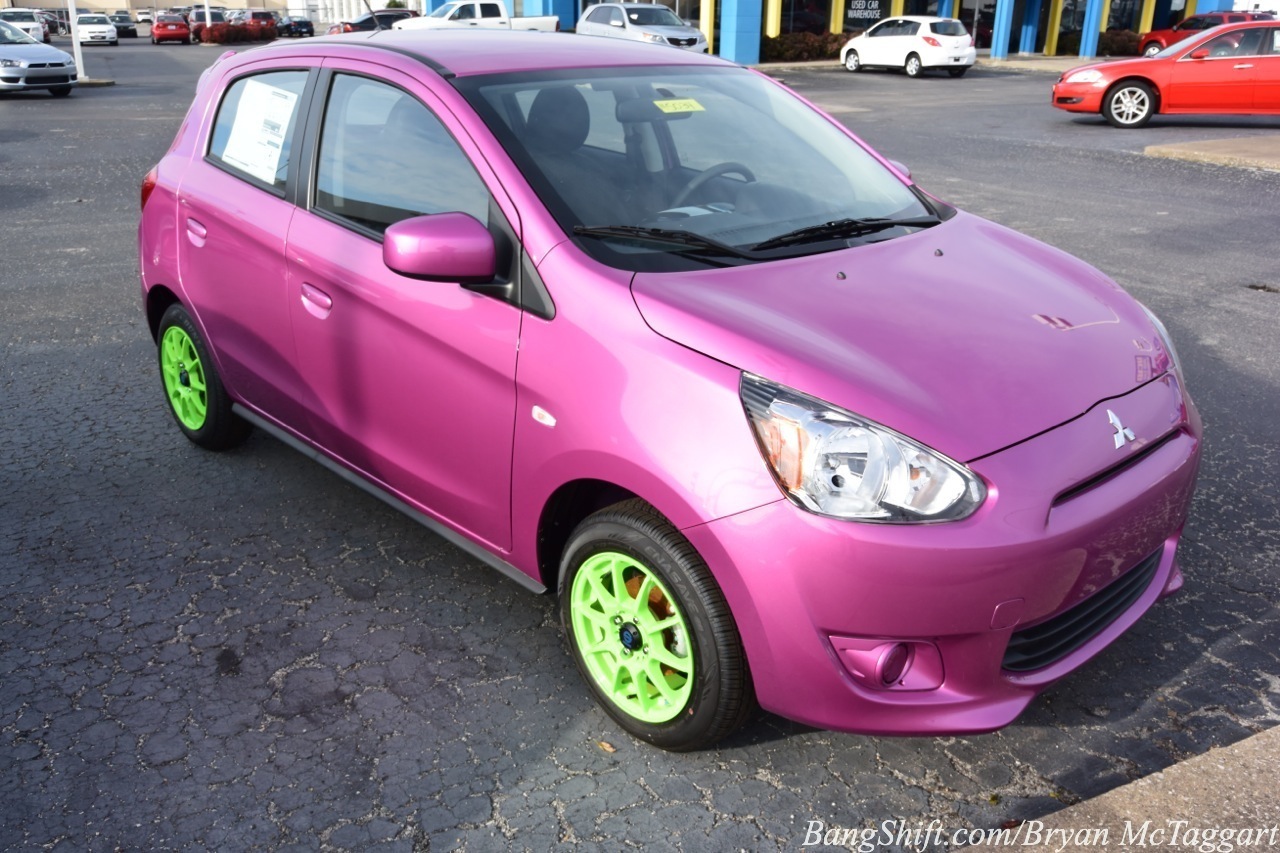 Twenty years ago, Mitsubishi was making excellent cars. No, really…leave the Fast and the Furious jokes out of it and look at what was available in the showrooms in 1995: You had turbocharged all-wheel-drive equipped rally rockets before America really embraced the concept. The 3000GT was a grand tourer that was properly fast and if you spent the money, could be equipped with a folding hard roof convertible, something that will cost you dearly even today. The Eclipse was at it’s best, just before it became a Dodge Avenger in a kimono, let alone that bloated thing it was before it was summarily executed. The Montero has always been an underrated badass, and the Montero Sport, known elsewhere as the Shogun, Challenger and Navarra, is just as capable. 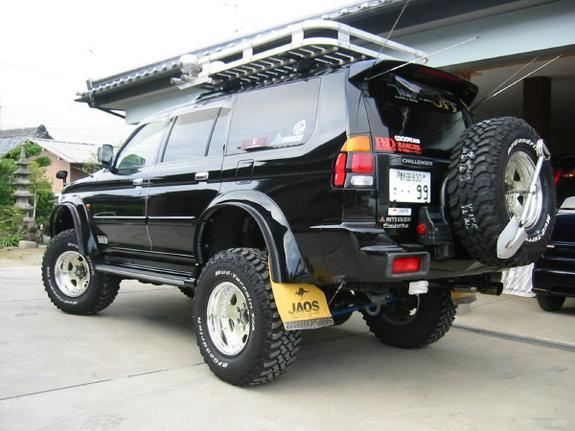 About the same time the Eclipse was punted the Lancer Evolution came out, and together with their main competition, the Subaru Impreza WRX and STi, Mitsubishi was giving some solid credit to the concept of a turbocharged four cylinder and all-wheel drive, while simultaneously doing their best to make up for all of the “See Crank Walk! Walk, Crank, Walk!” jokes that owed to Eclipse motors having a slight defect or two. Several nasty EVOs exist, including Mike Reichen’s LSR-racing Evo II, which has been trapped at speeds well over 230 mph. In Europe they had a unique model name: the FQ series. While there is no official admittance, it’s accepted that FQ stands for “F*cking Quick”, and even to the end of the model run, they are the stripped down and completely antisocial versions of a rally rocket, something that makes us smile. 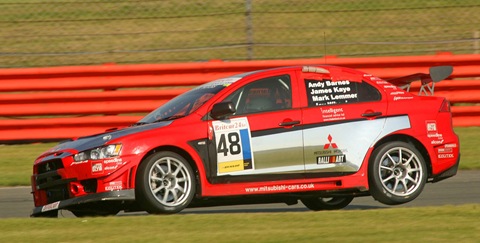 But while other manufacturers have managed to keep up the performance trend (see Subaru’s continuing success with the STi, Honda’s return to the NSX and even Toyota’s insane flip-top funny car Camry from SEMA), recently it seems that a bad case of “Cranial-Rectii Syndrome” has befallen Mitsubishi and doesn’t show signs of regressing anytime soon. The days of the 3000GT, Eclipse, Evolution and other exciting cars are gone. The Montero and Montero Sport aren’t sold here anymore. Instead we have the Outlander series, which is filled by an SUV and a crossover, the last of the Lancers and Evolutions, and the Mirage, a horrifyingly bad little hatchback that no self-respecting automotive enthusiast should ever be caught dead in. When you have to go to oddball colors to sell an economy car, you know you’ve messed up somewhere. 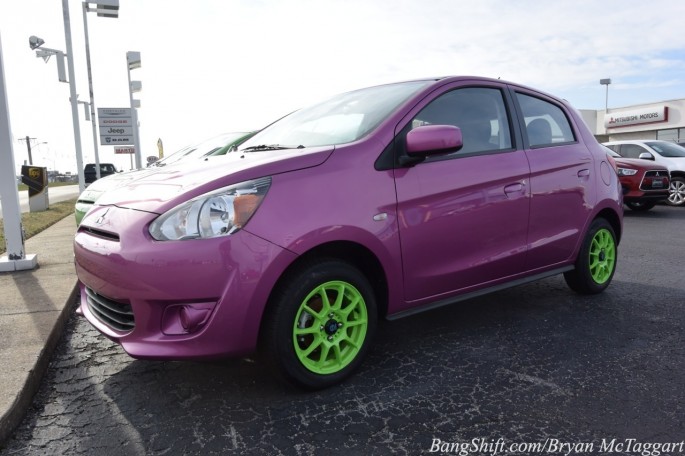 Looking at the Mirage, you have to wonder if Mitsu’s mission statement was recently re-written to “Aw, the hell with this.” I’m not exaggerating in the least…there is honestly no marketable reason why this little Easter Egg of a car is sold in the United States. The shape is uninspired. The powertrain, which was never going to be powerful in a car this smalll, pulls modest MPG numbers, not the type that would make you want to go out and buy one. In fact, if it’s mileage you are after, I’d rather see someone in a Volt or (oh, this is a dark moment, indeed…) a Prius, just because you are getting much more car for your money, even at the higher cost. The price isn’t an attractive point either. For $13,000, you could hit a dealer’s used-car lot and walk out with ten times the car that may still have a powertrain or bumper-to-bumper warranty on it. A short walk away from the pictured Mirage, on a Dodge dealer’s lot, you could get into a three-year old Scion tC with 19,000mi on the clock for $15,000. Unless there is no way you can cough up that kind of money, there is no reason to look at the Mirage.

Mitsubishi claims that there is an exciting future with the company, involving hybrid SUVs and such, but when they have resorted to selling the Mirage instead of giving the EVO one more refresh, I have my doubts. It’s hard to believe that a company that used to sell so much good stuff is now hawking dollar-store crap that requires financing. 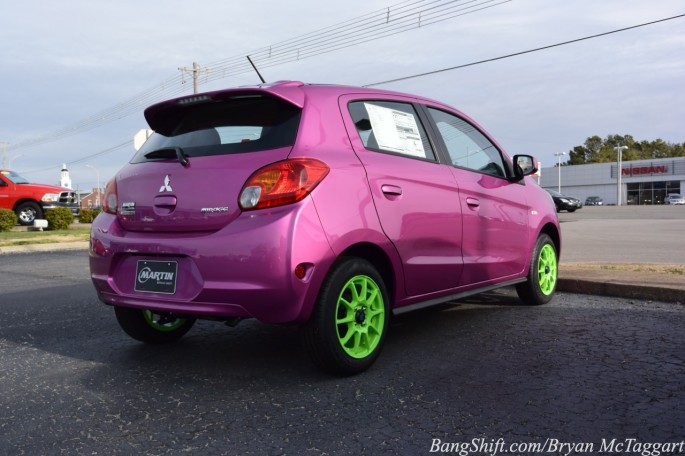 BangShift Challenge: What's The Best Power-To-Dollar Vehicle You Can Get Off Of A New Car Lot? Caption This: No Hitchhikers Allowed Past This Point

2 thoughts on “Unhinged: Mitsubishi’s Sad Fate Summed Up In One Purple And Green Mirage”