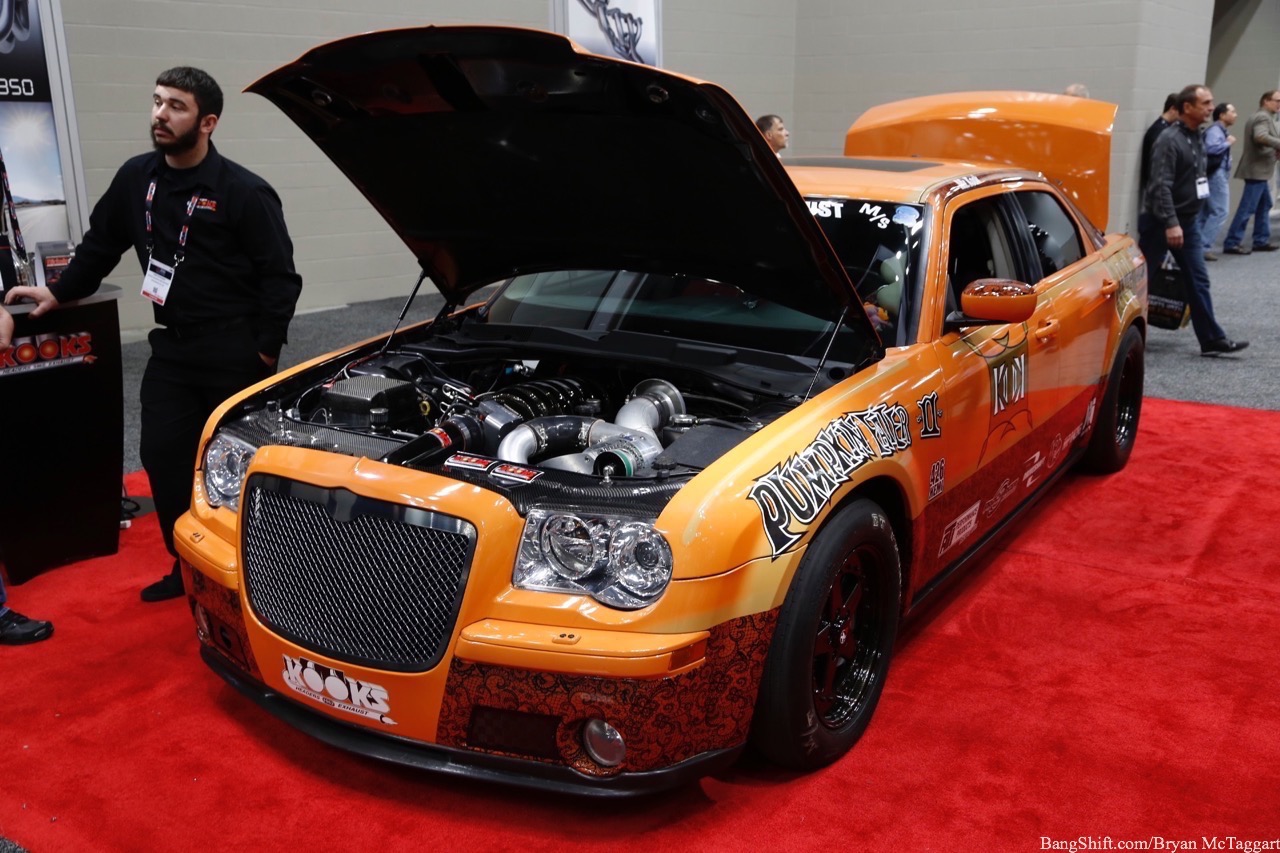 You know that old saying about not getting cocky, because there is always somebody out there doing it better than you can? I can’t lie, I’ve been feeling pretty cocky about the progress that has been made with our Angry Grandpa Chrysler 300C. It’s quick, it sounds great, it’s still fully streetable with no real deviation from where it was before the build, and yet, when you bury your right foot, you know this isn’t a regular used-lot car. I know there are quicker Chryslers running the quarter-mile, but whatever…I’m good with that.

Then, as I was walking through the PRI show, I came face to face with a solid reality check: the Kooks Headers 2006 Chrysler 300C SRT-8. You can’t miss it, it’s the Chrysler with the bright orange and lace graphic wrap and the freaking parachute hanging off of the back. This is a 175 MPH brick, a ProCharged, 426 stroker Hemi-powered monster, and was Papa Kook’s personal hot rod all the way up until his passing in August, 2015. And even when he was in his mid-70s, he didn’t mess around one bit. His SRT-8 is a beast of a car, one that would absolutely shame Grandpa back into the driveway. Scroll down to learn more about it: 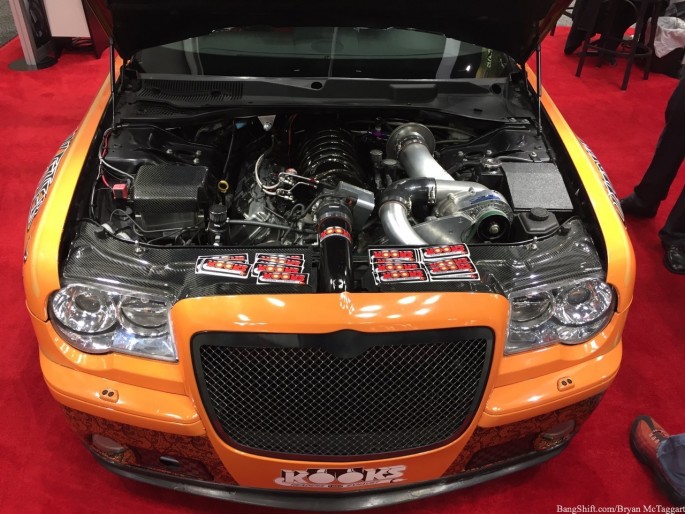 Ok, you’re angrier. A LOT angrier. The mill is a ProCharged stroker 426ci 6.1-based Hemi wicked up by High Horse Performance. You better believe that at full chat with everything working correctly, that the car is nearing…if it hasn’t crested…the four-digit horsepower mark. Woof. 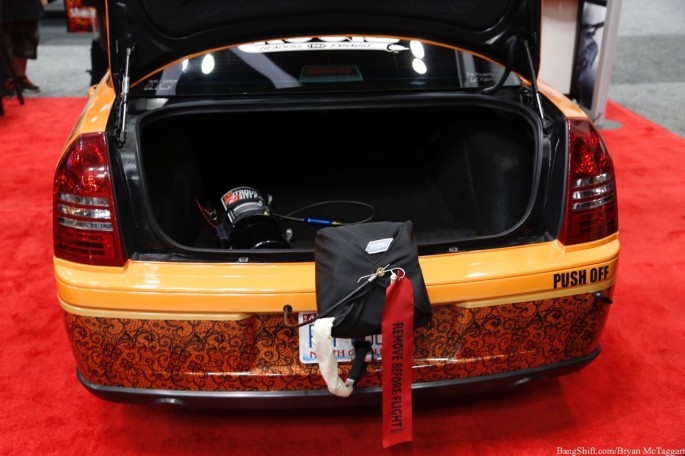 Two things in life many gearheads dream about: a great big serving of displacement-in-a-bottle and being required to fit a parachute onto the car. 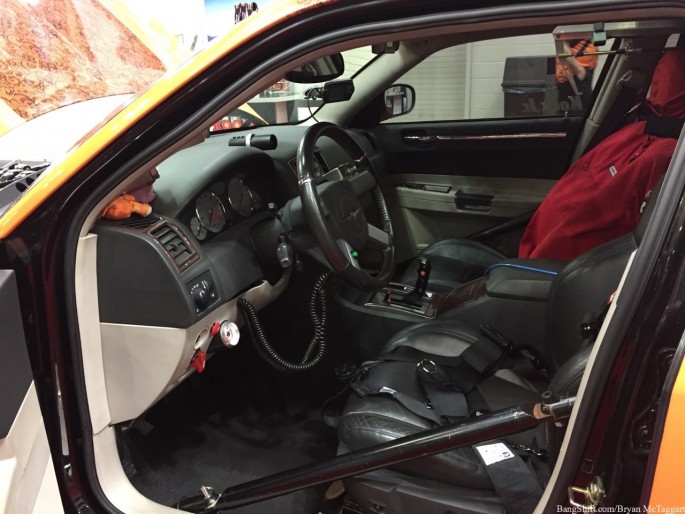 Inside is all business. The stock SRT-8 seats remain, as does the interior in full, but you can’t miss the nitrous switch, the boost gauges, or the harnesses. Papa Kook liked his office useful! 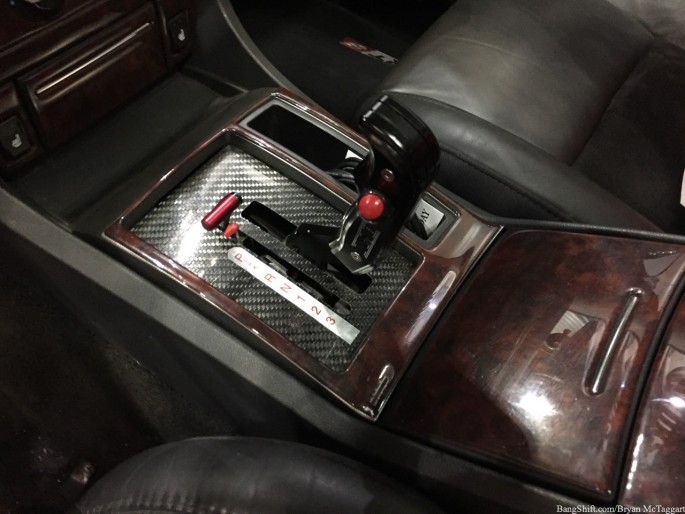 Speaking of useful…after a couple of dead NAG-1 transmissions, he decided that the transmission needed to be something beefier…like a TH-400 built to withstand the onslaught from the Gen III Hemi. We really dig the shifter…there’s nothing like having the big red button right at your hand, ready to be pushed! 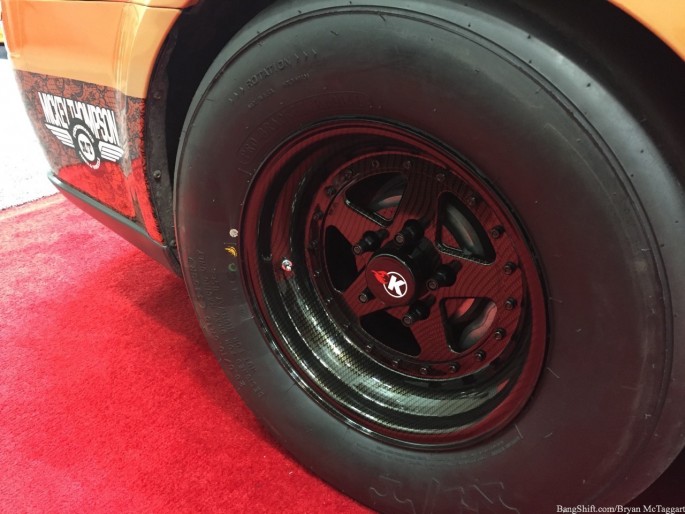 On the floor, the car was wearing it’s racing attire, which consisted of Mickey Thompson slicks. Note the wheels: just like the intake manifold and a few other parts, these are “hydrodipped”…not real carbon fiber, but the look is great. 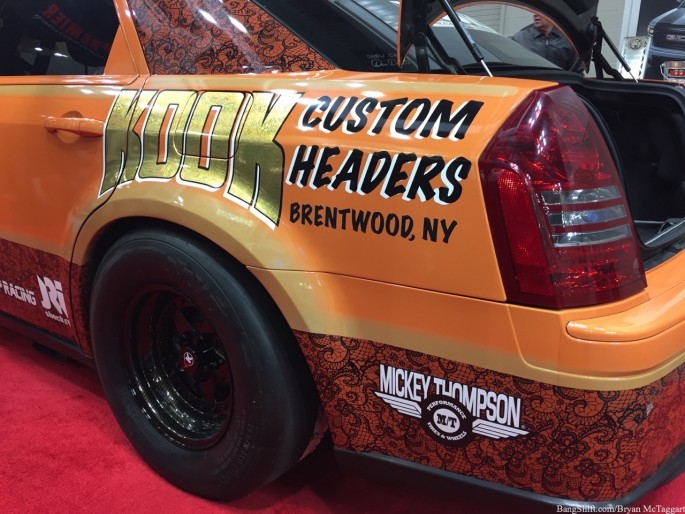 And on the subject of looking great, whoever thought up the lace graphic motif needs to be congratulated. The car’s visually arresting two-tone orange combination means that you’ll never mistake this Chrysler for any other.

Check Out the Route for the 2017 Dakar Rally Drag Action Coverage: PDRA World Finals Photos - They Were Flying In Virginia!

One thought on “PRI Show 2016: The Kooks Headers Chrysler SRT-8 – ProCharged, Nitrous, And”