When Kim Welch sent us some photos and history on his cool CJ5 build, we knew he was our people. As a regular visitor to BANGshift.com he knew that we love to take content submissions so he sent us his and said that he thought we might like it. Well, Kim was right. I totally dig this thing. He’s taken a CJ5 and made it 2 wheel drive with a dropped solid axle out front, a small block Chevrolet, and big and littles. Instead of me telling the story and motivation behind his build, we’re going to let Kim do that himself since he sent us the whole story to begin with.

If you have a car, truck, or project you think we’d want to know about, email it to me [email protected].

I have had many cars, a motor home, 3 boats and a few more projects, but now I wanted a hot rod project car. I knew if I was ever going to get it done (a hot rod project is never really done but at least finished to the point that it can be used ) it was going to have to be a real budget project. I have always liked an NHRA fuel altered, and the closest thing to them in a streetcar may be a T bucket. I do not really care for T buckets. I did not want a Camaro or Nova or Mustang, they have been done so many times, I would not be able to afford one that was special. Whatever I bought would have to be a 1975 or earlier model to avoid any Smog check hassles. Another big expense with building a project car is the cost of body work and paint, along with upholstery. I figured that a Jeep would look just fine in black primer, and there is no carpet, no door panels and no headliner, only seats. I think I got the Idea of a Jeep from Roger Wolford’s Secret Weapon. 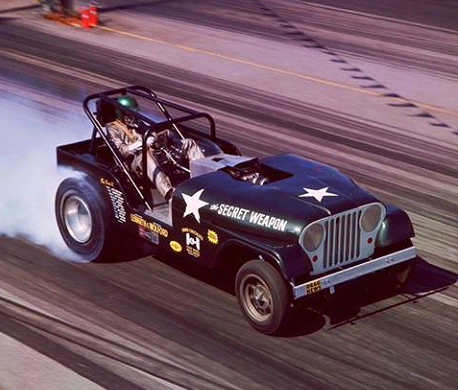 In 1972 AMC took over the Jeep brand. They wanted to put their 304 V-8 in the CJ, so they added 5 inches to the engine compartment making it easier to install a small block Chevy in the 1972 and later vehicles. They also at the same time changed to a different style transfer case and rather than having the earlier style large offset to the pinion in the rear axle, it was now only offset one inch to the passenger side. This lines up well with the available aftermarket engine mount kits and allows you to retain the stock Dana 44 rear end without the expense of narrowing some other rear end to fit. 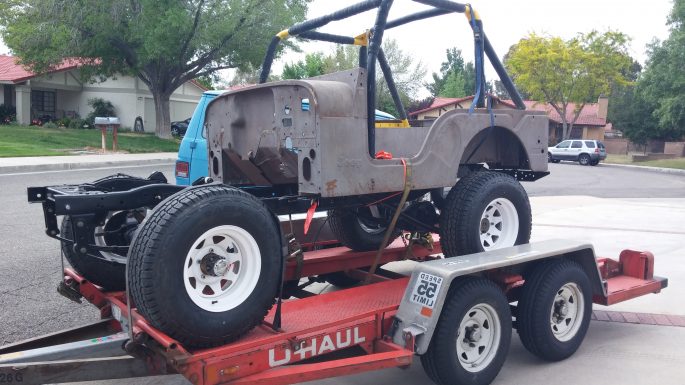 Engine, transmission and transfer case also available but that is additional cost so if interested ask me.

The plan was to make it as simple and light as possible. I got rid of anything that it did not need. I replaced the heavy Dana 30 front axle with a six-inch dropped tube axle and disc brake kit from Speedway Engineering. I replaced the power steering with manual steering. There is no radio, heater, air conditioning or any other creature comforts. 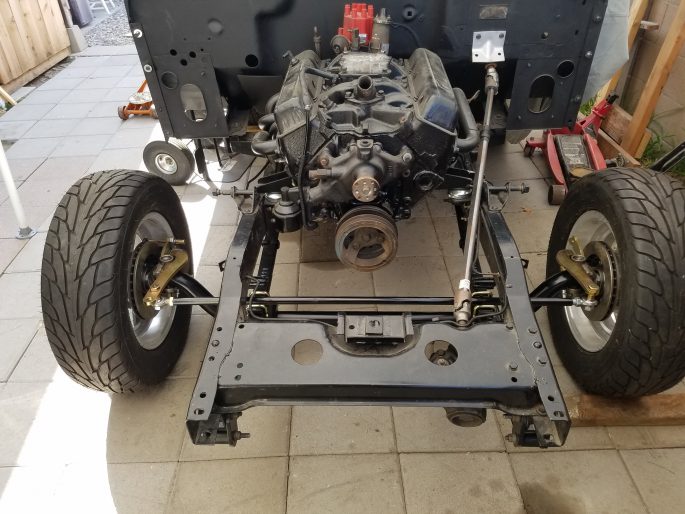 My plan was to install a small block Chevy engine and automatic transmission. I figured that during the time that I was building the car I would come across some smoking deal on an engine and trans that was just too good to pass up. In the meantime, my nephew from down the street was moving to Texas and offered me a 307 engine and turbo 400 trans that he had. It came from one of our neighbors that had a 1968 Chevy C10 pick up that he intends to LS swap. I was going to use the 307 and turbo 400 as a set up piece to get the engine mounts, transmission mounts and headers installed.

I had reached a point in the build when I needed to decide about the engine. I had not found any great deal on another engine, so I decided to go with the 307 for now. It was time to install my new intake manifold and valve covers, so with a major concern about the condition inside the engine I removed the old valve covers and intake manifold. I was astonished by what I saw. I was expecting a lot of old grimy gook, but the inside of the engine was spotless and clean as can be. 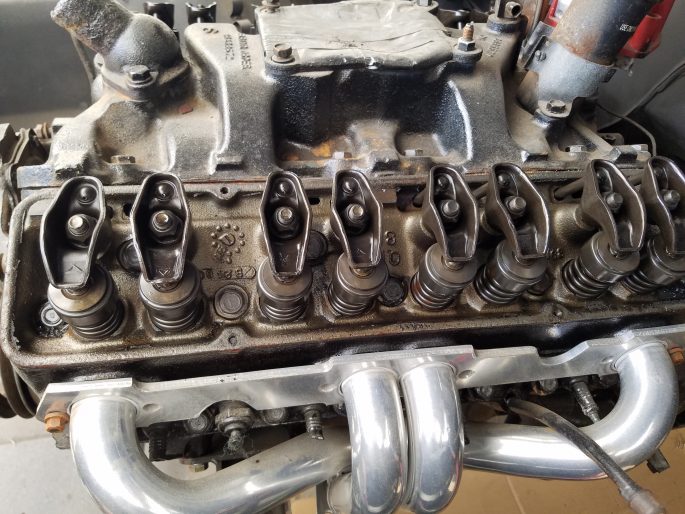 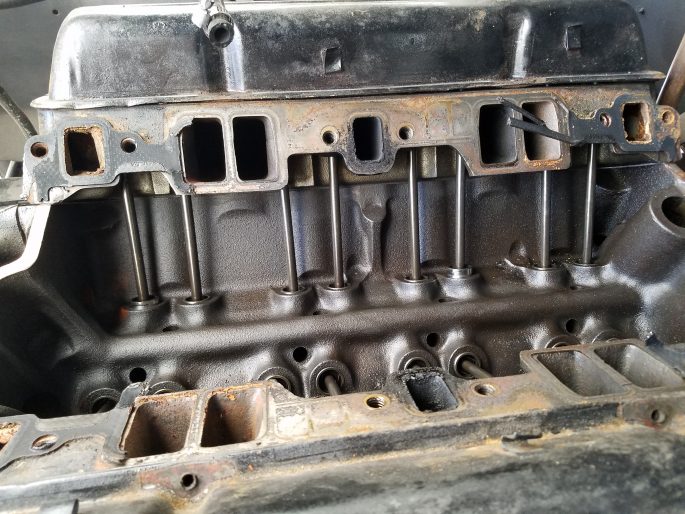 So, on went the new Edelbrock manifold and carb along with the Pertronix distributor, Taylor wires, Summit Racing wiring harness and a set of swap meet valve covers and headers. I built the exhaust system myself with some slip tubing and a pair of Magnaflow mufflers. 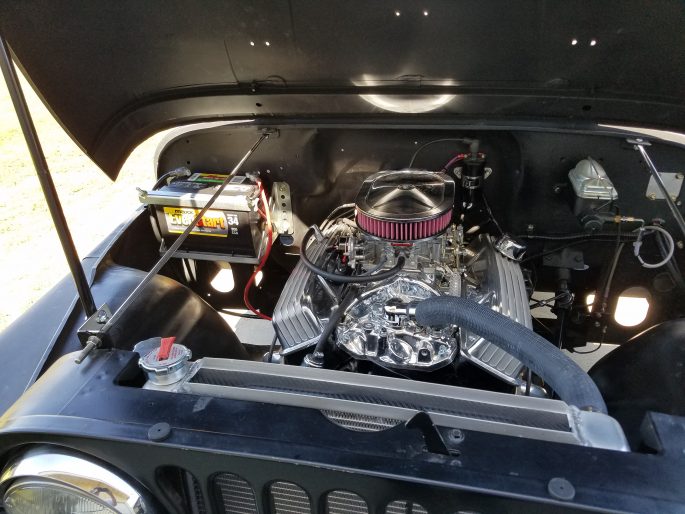 The Jeep got a coat of VHT black Hot Rod primer and the interior was filled with the stock original seats, and aluminum diamond plate in the bed. The Autometer gauges and a B&M shifter, were both swap meet finds. I had a new drive shaft made, that is 17” from center to center of the u joints. I installed a new universal Summit racing wiring harness and new turn signals and brake lights.

I installed a new Northern radiator built for GM V8 swaps into Jeep CJ’s. It fit perfect. A set of American racing wheels along with Mickey Thompson tires got it rolling. After fighting with the new steel brake lines that I made I finally had to go for Russell braided steel brake lines just to keep my sanity.

I am happy with the way that it turned out, but I wish I could have got it to sit lower in the front. I just could not get it any lower using the stock steering box and leaf springs even with a six-inch dropped front axle.

The first time that I turned the key it fired right up and ran well. It was very quick and peppy. The key to the way the Jeep feels with a stock engine and trans is the fact that it is vey light. I took it to a public scale and received a certified weight of 2220 LBS with a full tank of gas. The Jeep was completely home built in my back yard. I have put about 600 miles on it so far, just cruising around Huntington Beach, California, having fun. 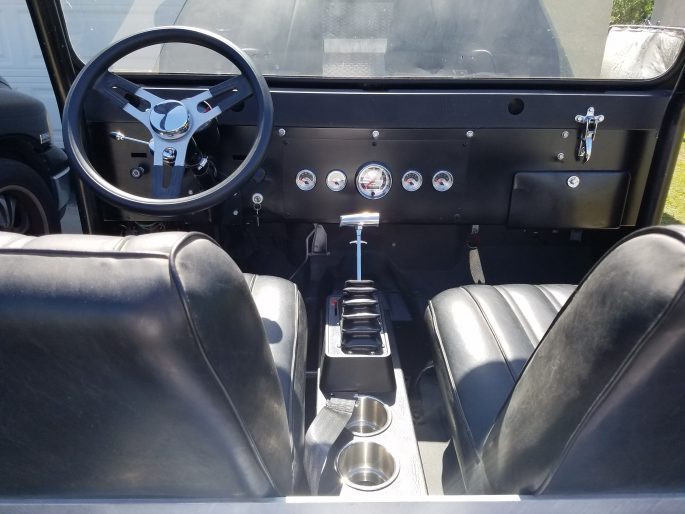 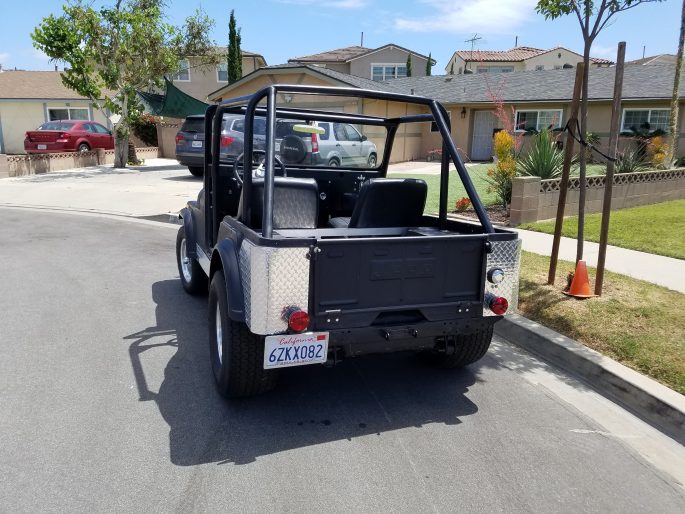 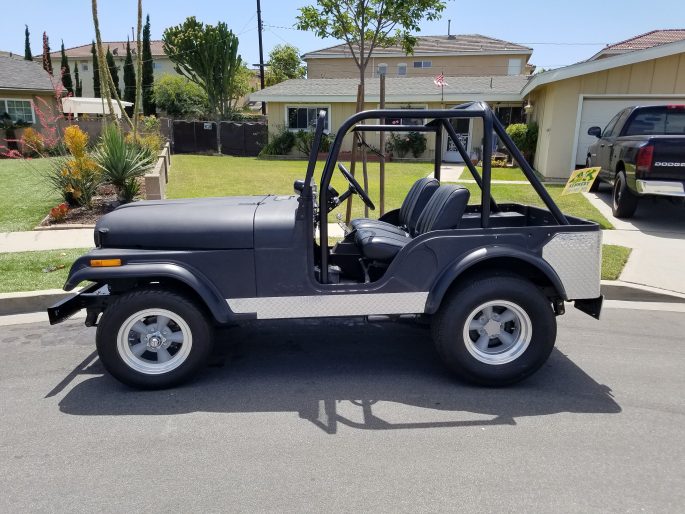 For Sale: Words I Never Would Have Thought You'd Hear Me Say. "Wow, This Is A Triumph TR4 I'd Own" This Little V8 Beast Is Cool! This Boss 429 Powered Nitrous Huffing 1967 Mustang Is A Radial Equipped Bad Ass!