Classic YouTube: Another Candidate For The Ultimate Camper Truck – This Tractor-Tired 6×6 Ford! 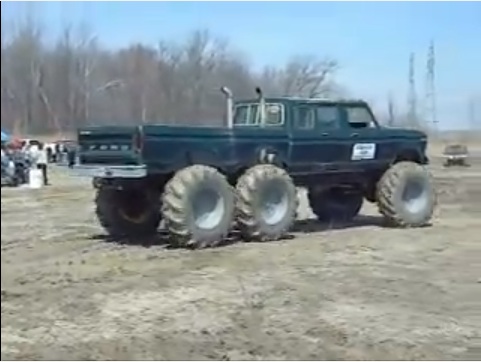 There are days where the whole “bigger is better” mantra starts grating on the nerves. When you are behind the wheel of a 23-year-old Chevy Tahoe, you should not feel like you are in a mid-sized sedan. You should feel like you’re wheeling a huge wagon around, but the lifted-truck brigade and the fleets of over one-ton trucks that roam around BangShift Mid-West say otherwise. And it’s days like that where a truck like this   seems like the best idea around. The classic shape of a dentside Ford with a phantom Crew-Plus cab, stacks out of the bed and enough tire to threaten anything that is still classified as a car by the insurance companies would have Super Duty and Ram owners moving out of the way in a hurry. Maybe it’s the orange triangle of shame attached to the tailgate which means that for all of the noise of the V8 coming through the stacks, that this rig has all the get up and go of a fat hen sitting on an egg. Maybe it’s the fact that there is enough frame twist going on that you’d be forgiven for thinking this tank was actually articulating. Having the turning circle of the Queen Mary II isn’t helping matters, either, because this thing is about as nimble as a boulder falling off of the edge of Pikes Peak. You be the judge: is this Ford awesome or not?

Rename, Stat: Watch As The Nissan NP300 Hardbody Folds Up Like Origami In A Crash Test Eric Yost's Drag Week Winning Turbo Small Block Is For Sale! Run 7's With This Proven Combo In A Street Car!

One thought on “Classic YouTube: Another Candidate For The Ultimate Camper Truck – This Tractor-Tired 6×6 Ford!”