Ford And The National Inventors Hall Of Fame Museum Have Partnered To Display This Combination 1965/2015 Ford Mustang! 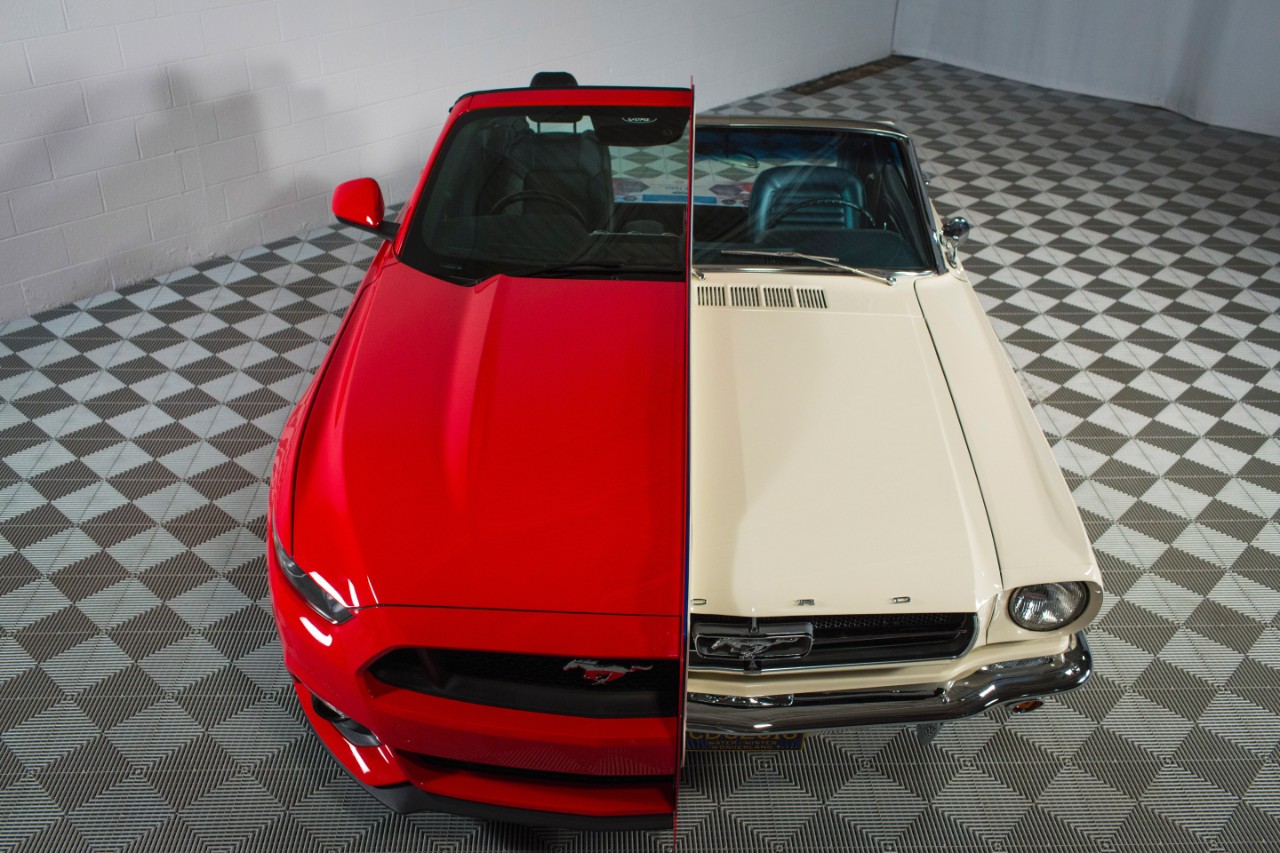 (Photos: Ford Motor Company) No, we aren’t messing with your eyesight…each photo is of the one same display. Ford and the National Inventors Hall Of Fame Museum in Alexandria, Virginia are partnering up for an unique display for the new Intellectual Property Power Exhibit. Along with other exhibits, the two-into-one Mustang unit, built by Classic Design Concepts, is composed of 60% each of a reproduction, licensed by Ford 1965 Ford Mustang built to 1965 specifications and a right-hand-drive 2015 Mustang is meant to showcase the power of patents. Why is this important? For the original Mustang, the car was put into production so fast that not one single styling patent was issued and 100 functional patents were simply allocated for use, like the rear-seat speaker and the convertible’s top. Not getting those patents allowed the Mustang to arrive on the scene as fast as it did, but as far as the unique look goes, it wasn’t protected…not good for a car that still holds a sales record to this day. By comparison, the S550 Mustang has thirty-six styling patents to safeguard it’s looks.

Now, that’s all well and good, but what does it mean for gearheads? Well, besides learning a thing or two about patents, you can take a comparative look at the similarities and differences between the Falcon-based original pony and the latest and greatest version. It should come as no surprise that the S550 side is going to be physically bigger, but the more you look at the differences, the more you can come to appreciate the modern upgrades. Take a look at the A-pillar alone and see the structural upgrades that have been put into place. You might not appreciate the relief in the seat padding for your wallet on the new car, but sit in the 1965’s bucket for a couple of hours and get back to us. We often hear lamentations on how the older car compares to the newer car…well, here’s your chance to make the comparison in person and learn a little something while you are at it! 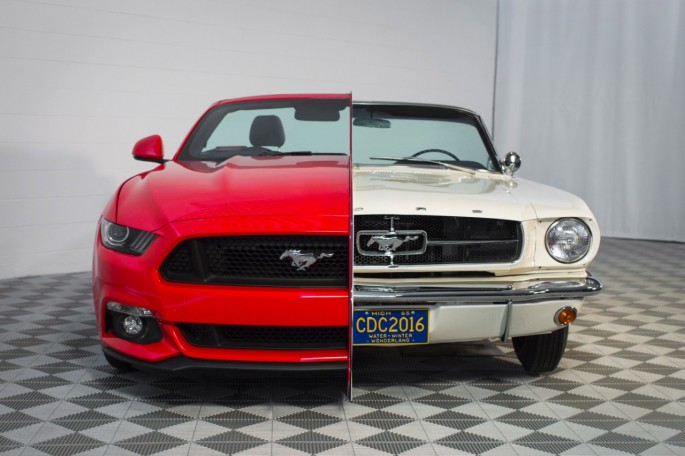 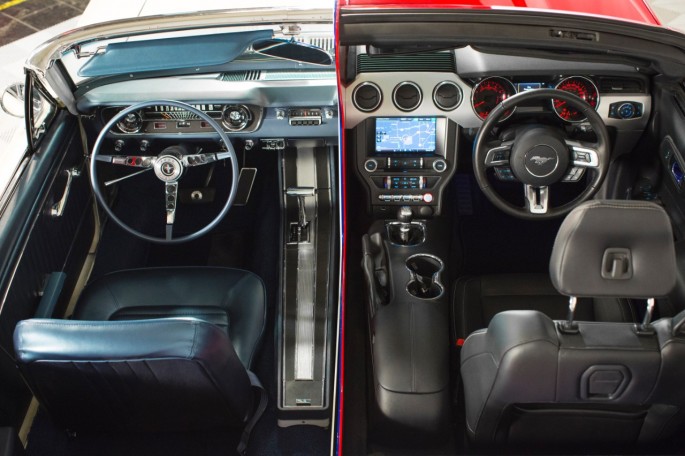 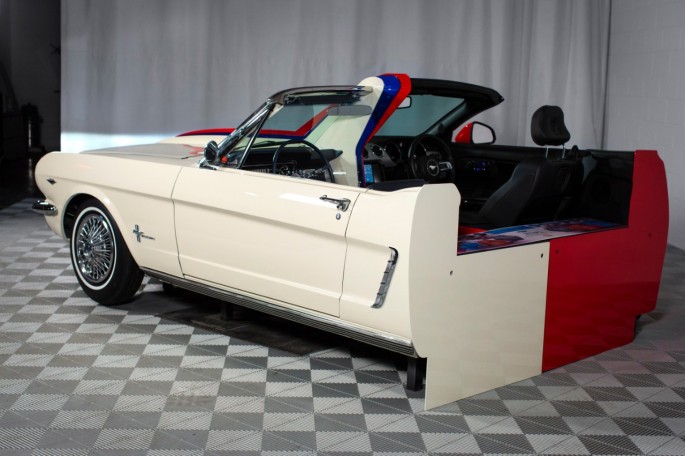 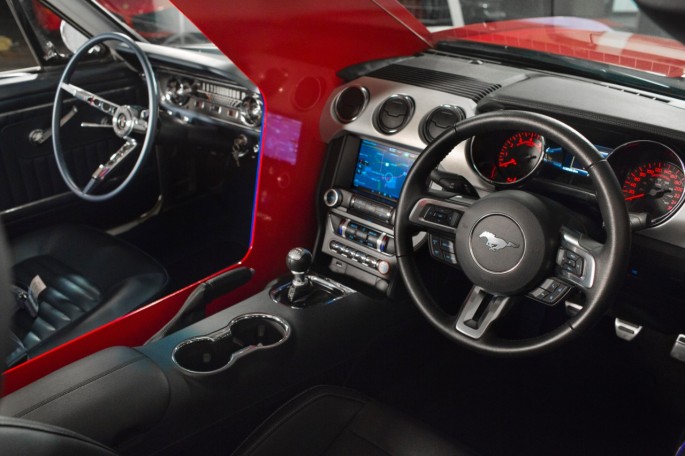 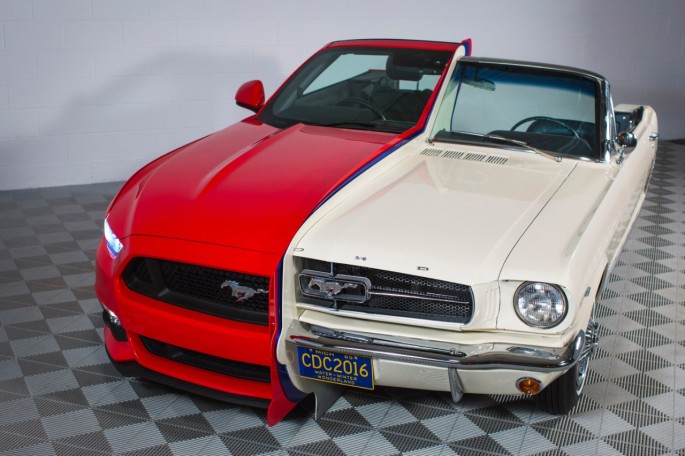 The split-personality Mustang is part of a new, permanent Intellectual Property Power™ Exhibit   at the National Inventors Hall of Fame museum on the United States Patent and Trademark Office Campus in Alexandria, Virginia. The Mustang, along with other exhibits, Museum exhibits, including the Mustang, celebrate the story of intellectual property and illuminates its significance to progress, innovation, and culture in America, as well as how trademarks, patents, and other forms of intellectual property make modern amenities possible. The interactive display is designed to highlight the importance of patents and the tremendous march of technology over the decades. It calls out various patents in the current vehicle, as well as those in the original pony car.

The NIHF sought out Ford as its partner for the project because the company has played such an important part in the long history of American innovation with the Mustang being such an icon for half a century. Ford and its employee volunteers have also been involved for the past 20 years with Camp Invention, a program of NIHF. Camp Invention is one of the nation’s premier summer enrichment programs and leverages hands-on activities to promote Science, Technology, Engineering and Math and builds 21st century skills.

When Mustang was launched, no specific styling patents were granted. Only after the car proved such a huge success – selling more than 1 million cars in its first 18 months – were styling patents even considered and applied for over time.

“Everything moved so fast in the design and run-up to production of the original Mustang that there were no styling patents issued back then,” says Chris Danowski, Ford director of technology commercialization and intellectual property licensing. “Now look at the current car; 2015 Mustang Convertible alone was granted 36 styling patents, which ensure the unique look stays with the car. It also has many unique functional patents for things like the airbag structures, 911 Assist® and so many other technologies baked right in.”

In 1965, Mustang utilized more than 100 of Ford’s existing functional patents. Those patents reflect some of the touches customers loved back then, including a rear-seat speaker and a power convertible top. Normal conveniences we now take for granted were also involved, like Patent 3,271,540 – the origin of Ford’s self-canceling turn signal.

Today, Mustang is a wellspring of creative design and engineering. The car introduced the first passenger knee airbag system packaged inside the glove box door, with 15 patents granted. It debuted electronic line-lock, along with standard launch control – designed to help bracket racers achieve more consistent performance at the drag strip. Mustang incorporates features specific to modern times, with patented relief in the seat cushion to allow a wallet or phone in an occupant’s back pocket to protrude further into the seat for more comfort.

Many of these patents and more will be illustrated in the display, crafted by Classic Design Concepts, which combines about 60 percent of the driver’s compartment of the original Mustang and about 60 percent that of a new pony car – both including the console area and technology of their times. The left side consists of a reproduction 1965 left-hand-drive Mustang licensed for modern production by Ford and built to the same specifications as the original car – in itself an example of the licensing benefits of intellectual property. The other side is a right-hand-drive 2015 Mustang that is sold in several of the 150 countries where the car is now available.

Visitors to the museum will be able to sit in either side of the car and directly compare features and styling details; From the AM radio, roll-up window, vent air window, and optional retractable color-keyed and seat belts available in 1965, to the working touch screen display in the 2015 model. Some patents and other intellectual property will be displayed on accompanying monitors and over speakers. Visitors to the display will also be able to hear the sounds of the original 1965 Mustang V8 engine and a 2015 Mustang V8 engine at idle.

At the May 4 unveiling ceremony, Ford Motor Company founder Henry Ford will also be highlighted at the National Inventors Hall of Fame.

Watch Lavon Miller Run 8.27/166 In His 4,500b Cummins Powered Drag Truck This Racing John Deere Lawn Tractor Flies, Sounds Incredible And Rips Donuts In The Grass Like None Other

3 thoughts on “Ford And The National Inventors Hall Of Fame Museum Have Partnered To Display This Combination 1965/2015 Ford Mustang!”