Best Of 2015: Here’s A Proper Barn Find: A Turbonique T-16 Rocket Go Kart Was Found In A Barn In Alberta 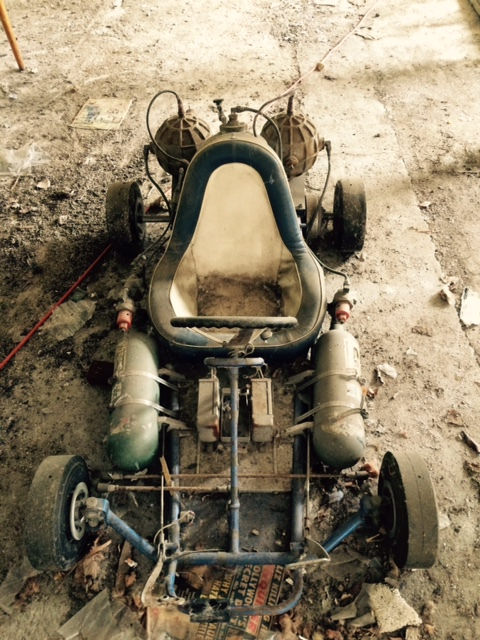 Turbonique only existed because the rule book and safety manual were both thrown out of the window when Gene Middlebrooks started screwing around with monopropellant thrust systems. This wasn’t a new stage of modifications, this was Wile E. Coyote’s own speed shop parts come to life, and they were an insurance company’s absolute worst nightmare. While Drag Axle cars were bad enough (reports suggest that they were useful for full-track burnouts and that’s about it), one of the most brazenly dangerous contraptions to have ever been filled with the “Thermolene” (N-Propyl-Nitrate) propellent is this go-kart. A rocket-powered go-kart. Even in the 1960s, when it was an anything-goes scene, this smacked of a bad idea. Reportedly, if the operator let off of the throttle and then reapplied the throttle, the Turbonique system would become a rolling bomb, and a few lives were lost in the resulting fireball.

Steve Buffel recently posted up the story of this Turbonique kart that made it into Alberta, Canada onto ekartingnews.com. The only difference between this kart and others is that due to the Thermolene’s unavailability in Canada, the propellant used was ethylene oxide, which was “sourced” from a Dow chemical plant. After the kart was tested on the street (!), one run was made at Speedway Park in Edmonton, Alberta…after hours, since the NHRA had instituted the ruling regarding Turbonique products right about that time. Paired off against a Hemi Charger, the kart ran 9.7 seconds at 151 miles an hour and made the Charger look like a chump in the process.

Right now, the owner (and only driver), Bill Moore, isn’t sure what he wants to do with the kart. Obviously, the freak factor coupled with the fact that it’s completely unrestored has caused many interested parties to come forward with offers. Will it be restored? Should it be restored? We suggest not, for two reasons: it’s only original once, and it will discourage anybody from thinking they are Captain Jack McClure. 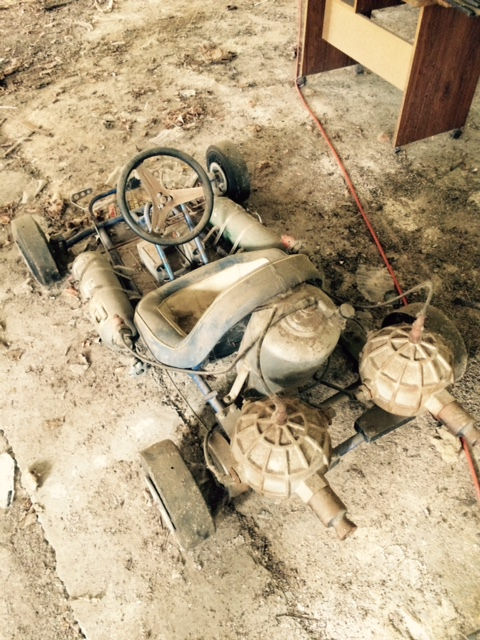 Thanks to Fred Timmons for the tip!

8 thoughts on “Best Of 2015: Here’s A Proper Barn Find: A Turbonique T-16 Rocket Go Kart Was Found In A Barn In Alberta”