$3,500 Build: Finishing Up The Sheet Metal Work On The Front End, Plus Bumpers Finally Go On, And More! 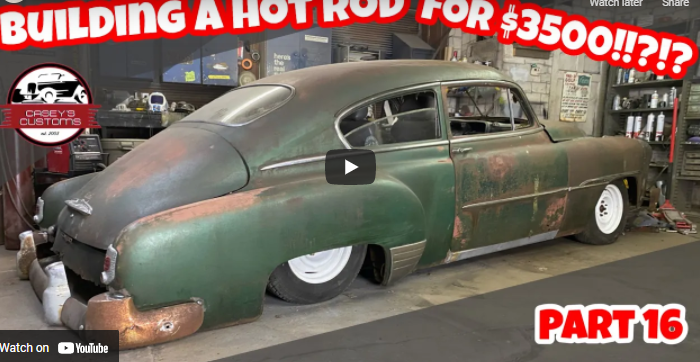 Here’s the latest installments from the $3,500 Build, and it is really starting to come together. With the sheet metal work on the front end coming together, and word on whether to chop the top or not, it’s certainly starting to look like a real hot rod again. If you haven’t seen all the videos from this build, then check out the link below. If you have, watch the latest two episodes below that.

The Casey’s Customs 1951 Chevrolet build has been pretty cool and feels a lot like his $1,000 budget F100 build he finished a few months ago. Because the budget is higher, this project has some extras you wouldn’t find on the lower buck build. Extras like the turbocharger and intercooler setup, air ride suspension, and more. It’s going to be a cool project for sure, and the budget is a lot higher, but that doesn’t mean it’s going to be easy at all. In fact, I think it might be harder because there are a lot of smaller expenses that come along with higher dollar features so the little things might add up and make it hard to stay on target.

We’ll see because Casey is pretty good at making deals and finding the right stuff. Of course, he’s also good at making stuff out of nothing, which are both valuable skills on a project like this. And don’t forget, you can end up being the owner of this one if you enter into the drawing when it is all done. Watch the video series and he’ll keep you posted on just how to do it.

He does regular budget updates as well, so you are always on top of what is actually being spent to do this one. Of course, he isn’t counting labor in the cost, because if you were doing this at home you wouldn’t be either, and in fact, he’s building most of this car at his home garage and not in his shop where he works during the day. Watch these latest few episodes and let us know what you think.

Why Be Normal? This Video Features Weird, Cool, Different, and Just Plain Odd Stuff Hooked To The Pulling Sled! Watch The IHRA Winternationals From 1987 Here - The Weekend A Doorslammer Went 200!