BangShift Goes Racing! Project Angry Grandpa Hits The Strip At Milan! Will We Ever See Thirteens? 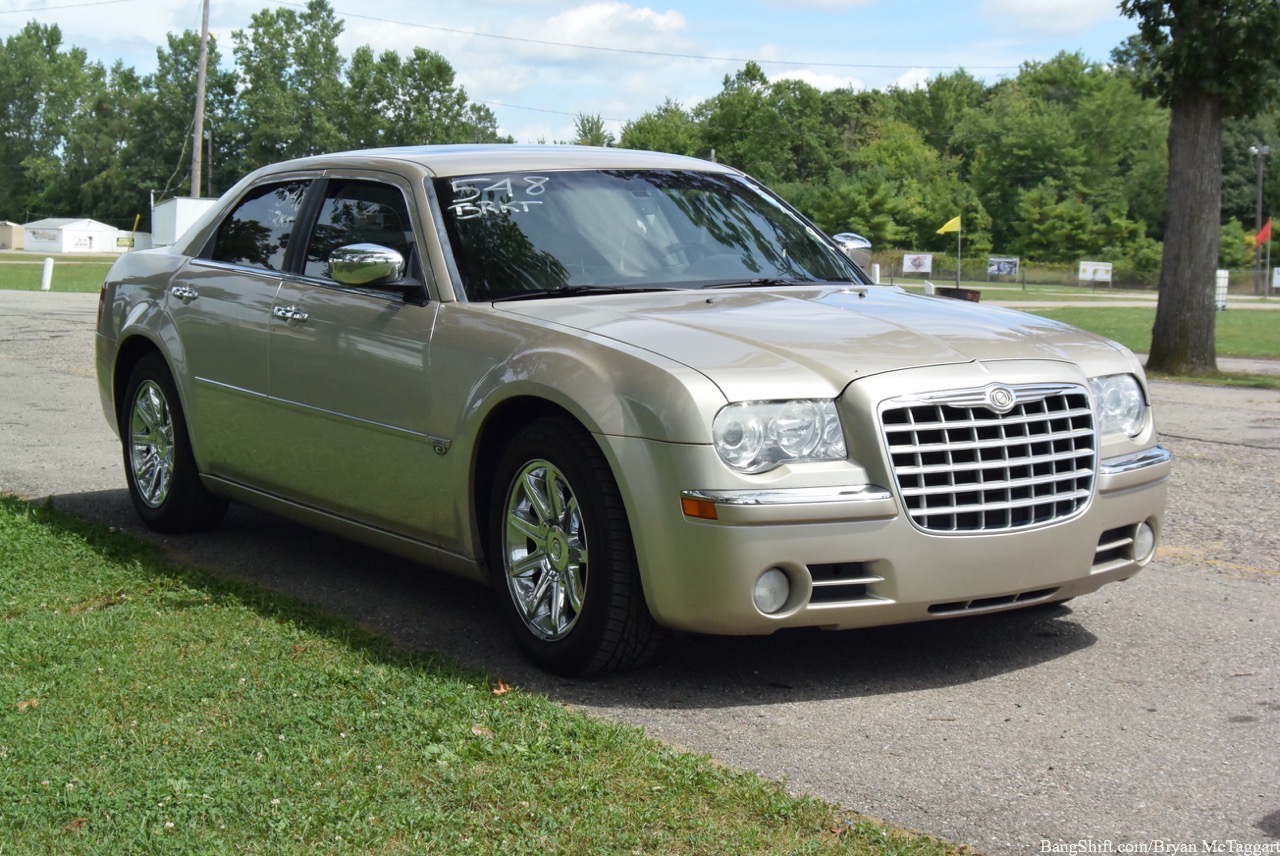 It’s official: my fascination with making the Project Angry Grandpa Chrysler 300C run mid-13s has turned into a mental sickness. How else do you explain yours truly waking up at 4:50 in the morning to get ready for what basically boiled down to a bracket race in the heat of the day? There I was, bleary-eyed, barely conscious, and yet preparing for what would need to happen once I got to the track: everything out of the car, gut the seats, check air pressures, hope I burned a decent amount of fuel off on the way down from the hotel…gotta watch that figure, and every pound counts!…and with luck, if I got in line quick enough, I could take advantage of the early morning temperatures and cheat my way to a 13.xx timeslip. 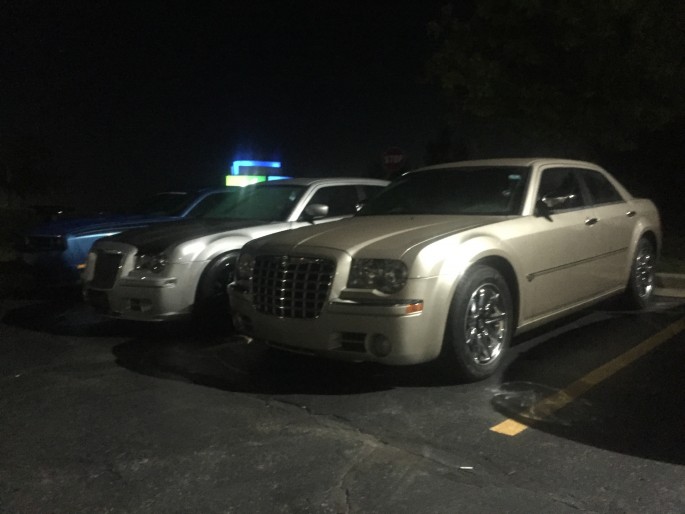 You can thank Dan VanHorn of Modern Street Hemi Shootout for this. I honestly had no intention of racing at Milan. I mean that…I was just going up there to shoot photos, do some live videos, have a little fun and head home. But about a week ago, while we were making sure we were on the same page in regards to the HEMI’nsanity events, he mentioned that I could race for free in the bracket class. And since Burleson (a man who is the equivalent of the little devil on your shoulder, urging you to try it because you’ll like it) figured out the connection between my appearance in Detroit and the race, it was only a matter of time before I simply went with it. It’s a free race…I’m not going to turn that down.

As before, the goal for the Chrysler is either a 13.xx timeslip or a trap speed over 100 miles an hour. Had tech gone quickly and the lanes opened up early for test and tune, that would’ve been in the realm of possibility. That didn’t happen: instead, I got two free test runs, two class runs for MSHS Bracket, and, ultimately, one race, whereby I was eliminated. What happened? Unfortunately, when it came to bracket racing guesswork, my judgement didn’t pay off. My first two test runs, back to back, were [email protected] miles an hour. Not great, but in the ballpark and on top of each other while hot-lapping, that made for a great start. Some time passed before the first MSHS Bracket test runs, so the car got to cool a little bit…not a lot, but enough. I expected a little bit quicker, and sure enough, the [email protected] confirmed my guesswork. It was the second MSHS Bracket test run that screwed me up: a [email protected] Great…there’s a range there, and a workable one, but there is also a trend of the car picking up speed and losing time, and that’s with the air getting hotter and the density altitude rising. Next run was the first elimination, and I had to select my dial-in…do I stay with something safe, like a 14.40, or do I anticipate losing another few hundredths off of my time and call it a 14.30?

Since I was feeling brave (and possibly stupid from the dehydration), I dialed-in at 13.30 and paired off against a 392 Challenger. The burnout was good…mainly because I finally forced the traction control to shutoff via the Trinity controller…but after that it wasn’t pretty: after cutting a bad light, I watched the 392 make absolute mincemeat of me before taking the win light. He had made the same guessing error as me, but he was much closer to his dial that my [email protected] was to my 14.30 dial. So much for the fun…screw this noise, where’s the food? 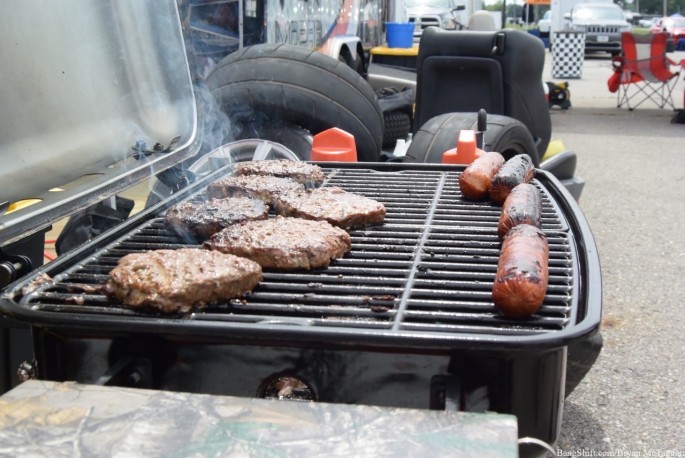 But all was not lost. Andy from East Coast Moparts hooked us up with four drag radials and two new roller wheels, and there’s other things that might be in the works later on this year, maybe by the fall. I will have that 13-second slip, and I don’t care if it means that I have to hire Andy Warren (NMCA True Street, 1971 Caprice, and more importantly, half of my body weight) out to Beech Bend to drive the damn thing! What’s the rule of thumb on weight, five horsepower per 100 pounds lost? 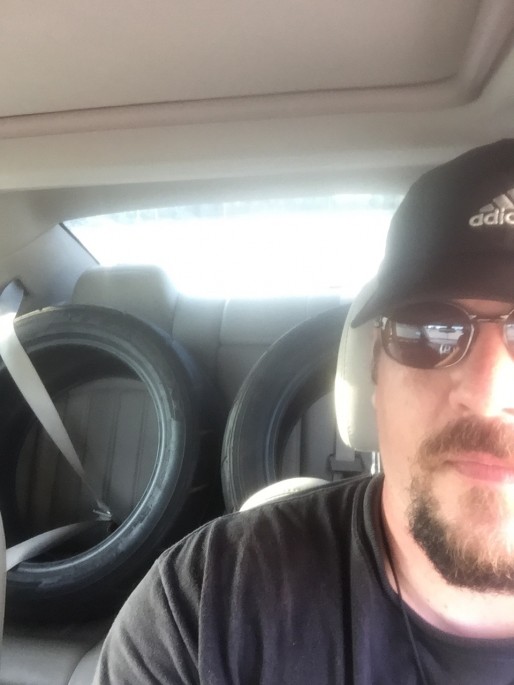 Leaf Spring Boogie! The Suspension Cam View Of A Leaf Sprung Drag Car Is Awesome This U-13 Ain't No Submarine - One Of The Nicest 1966 Bronco U13 Models Left On Earth For Sale

6 thoughts on “BangShift Goes Racing! Project Angry Grandpa Hits The Strip At Milan! Will We Ever See Thirteens?”