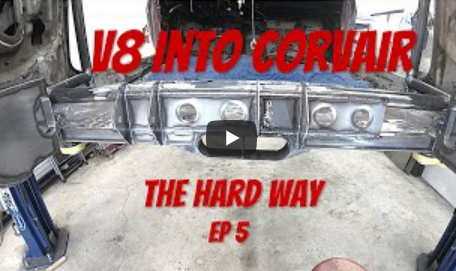 While I’ve heard of a few drivetrain swaps that practically bolt into other makes and models, that is not going to be the case when you are trying to put an LS4 into the back of a Corvair. These engines were in a front-wheel-drive application, with struts and steering and all kinds of other stuff that just wouldn’t be right in the rear of the Corvair. In this episode of the build, there’s more fabrication going on since there is a lot of that on a project like this. But the project is really starting to take shape and I know this one is going to be a hell of a cool ride when it’s all done.

Dyno Video: This Little Holden 308 Is A Stock Appearing Screamer And We Dig It. 100+ Years Of Work: Watch This Ancient Ruston Hornsby Engine Get Fired Up To Irrigate A Pakistani Farm

2 thoughts on “LS Corvair Project: The Transverse LS4 Swap Continues With More Fabrication. This Is Going To Be One Cool Ride.”