Project Angry Grandpa: We Take Our 300C To The NCM Motorsports Park For Some Exercise! 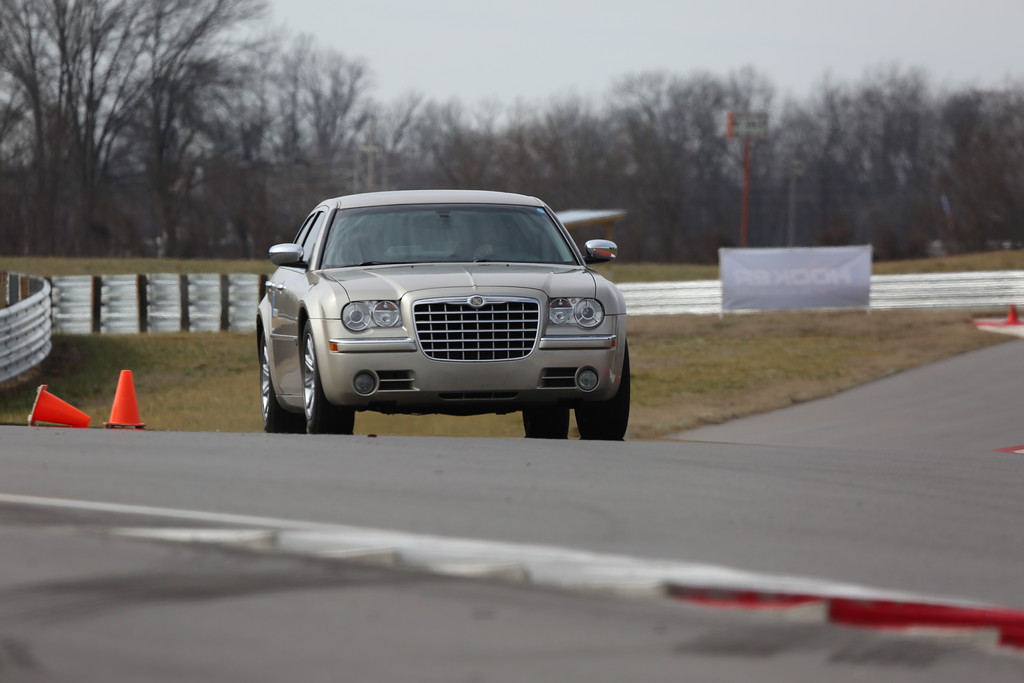 (Track photos of the car courtesy of JRP Photos) Testing a two-ton RWD car on a racetrack on a cold morning in late January sounds like the dumbest idea in the world. Tires won’t be up to temperature. The track will be colder than a well-digger’s chicken and slicker than a mob lawyer. But out of all the things I love when it comes to automobiles, driving, and in particular racing, is the top, period. So I was not about to let the likes of temperatures in the thirties and a threat of rain or snow keep me away when the NCM Motorsports Complex’s Michelin Winter Track X day came around this last weekend. 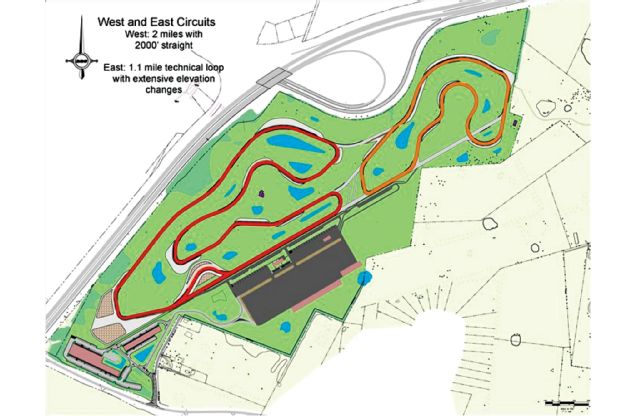 The National Corvette Museum Motorsports Park track is a peach. You may remember from the coverage we did for the opening last summer that the course is a fast one…fast enough, in fact, that a few laps riding along in a C7 Stingray were enough to necessitate a trip to the chiropractor to re-align my freakin’ neck from the G-forces. That was on the orange section of track. For the Track X, we would be using the west course (red) which is two miles long and has 13 turns. Even with the autocross gates and extra chicanes set up around the course, it was still going to be plenty fast. I missed the first Track X earlier this month, which had unseasonably warm weather, and I’ve been wanting a crack at driving on the NCM track in anger since the Corvette opening. I was not going to be denied, I didn’t care if a damn blizzard suddenly formed. (Hmm…Snow-X. That could be awesome…) 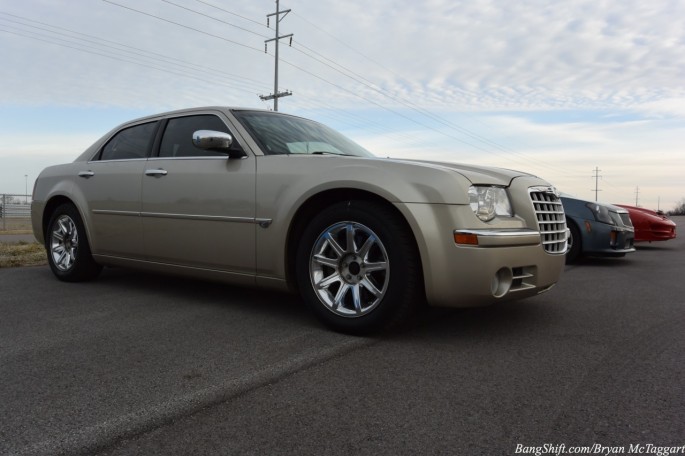 Saturday morning, the temperature was just about freezing when I walked out before sunrise and started the 300C. I had performed all of the track prep the night before: I ditched the center caps of the wheels, emptied all of the crap out of the trunk, got all of the loose items out of the interior and had set the tire pressures to an even 32psi, hoping that they would gain a couple of psi once they warmed up. That morning, I made sure the helmet was in the car and made the drive to the track. Walking around the track, there were signs of impending doom: there were plenty of skid marks that lead off into the grass, or worse, the Armco barriers. One particularly dark set of marks pointed to the first Track X, where a Corvette smashed into a tire barrier. On one section, a downhill right into an uphill left, there was ice and moisture on the track.

So, how did the Chrysler do? Better than expected. With a curb weight just under 4,100 lbs, hauling the gold brick around was going to be like watching Fantasia: a hippo was going to be dancing to a wonderful soundtrack. Since I really haven’t driven the 300C in any kind of aggressive manner that involved cornering, I used my first couple of laps to get comfortable with the car and it’s dynamics, and by the third consecutive lap it was obvious that the brakes were going to be an issue. There was fade, there was shake when they got hotter, and there wasn’t enough confidence to push the car 100%. I parked for a half-hour to let them cool, then went for two very hot laps. The 300C is set up for mild understeer, and until we get our hands on a tuner that can absolutely shut off the stability control and traction control fully, that’s all we get. The couple of times the car did try to rotate, it was very progressive and controlled, right up until the electronic nannies stepped in and put an end to the fun. There’s body roll, but unless you have driven Ferraris all of your career, it’s not bad, certainly not as bad as you would think. The steering is kind of numb but it’s useable and the automatic’s AutoStick mode is actually useful in locking out gears (most of my runs only used first through third). The Magnaflow system we put on last summer makes the right kinds of noise in the upper RPMs, with people coming up after my second run (where I left the line with tires blazing) wanting to know what mods the car had. By the end of the day I was comfortable enough that I was throwing the 300C into turns, getting just sideways enough that stability control wasn’t stepping in and coming out strong.

If you’ve never road coursed a car, do it! Drag racing is fun and all, and auto crossing, while fun in it’s own right, limits your speed. With barriers and all in place I know I was well over 80mph and on one lap, well over 100 mph on the straights, even with the marked gates. I expect to be a regular at these events, since the cost is pretty minimal and the controls are limited to safety rules and proper preparation. 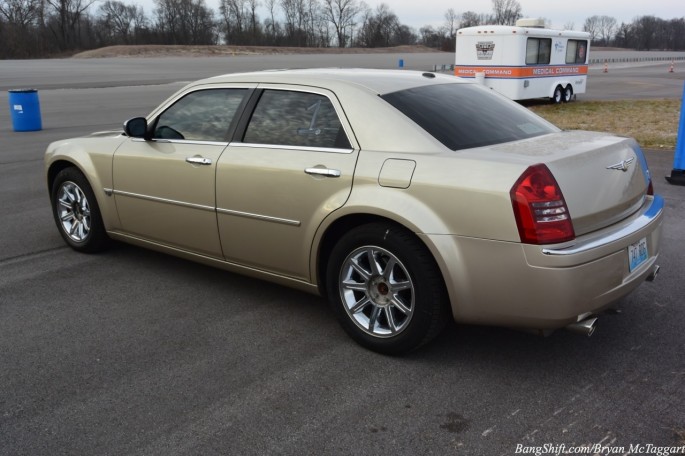 Here’s the Chrysler, as prepared, first thing in the morning. 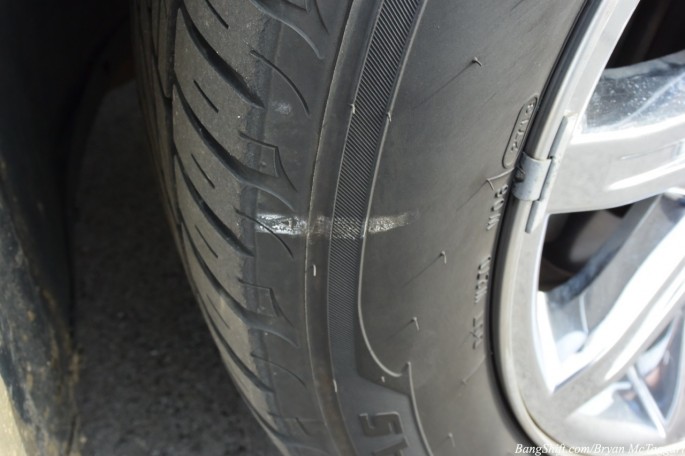 Using a tire marker, I marked the sidewalls to gauge just how badly the tires were rolling over. The Firestones that are currently on the car did amazingly well for a touring tire. 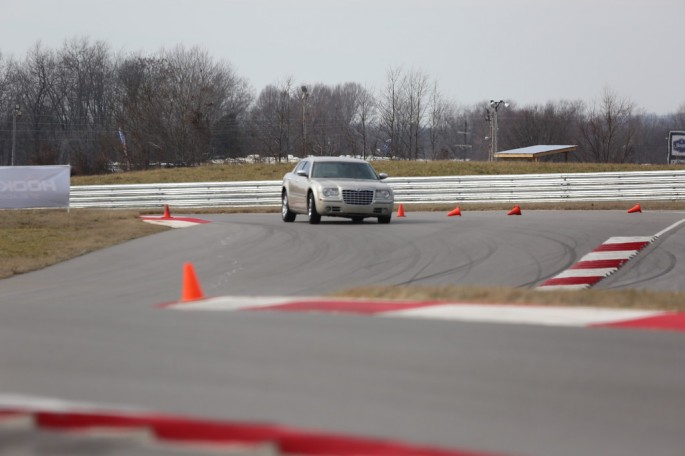 Here you can see the majority of the car’s movement: it rolls a little, but the suspension does a great job of managing the weight. 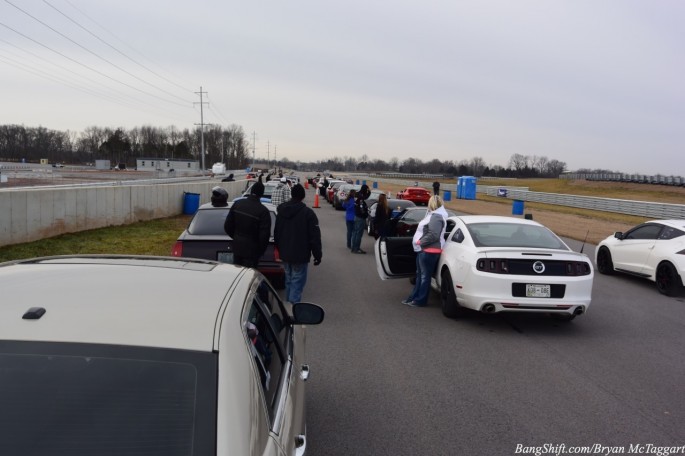 After the driver’s meeting, everyone staged up according to a sticker that was affixed to the windshield. There was a pretty good mixing of cars, from a Honda CR-Z through one very nasty track-prepared C5 Z06. 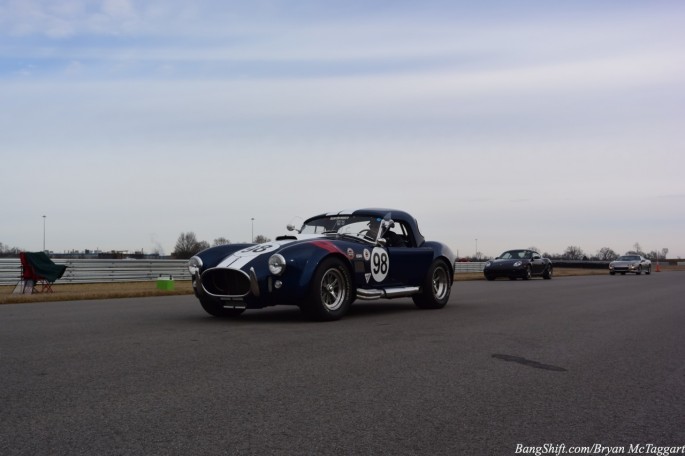 This SuperPerformance kit Cobra took things easy, since traction wasn’t great most of the day. 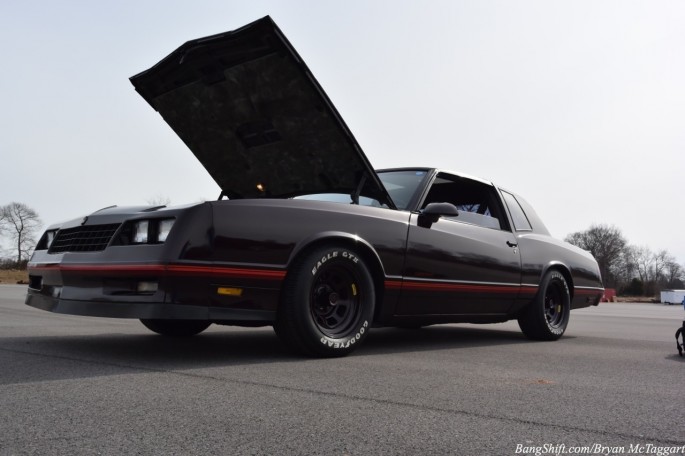 This Monte Carlo is a one owner, mostly stock vehicle, and the driver had no inhibitions about winging this Aerocoupe out sideways. 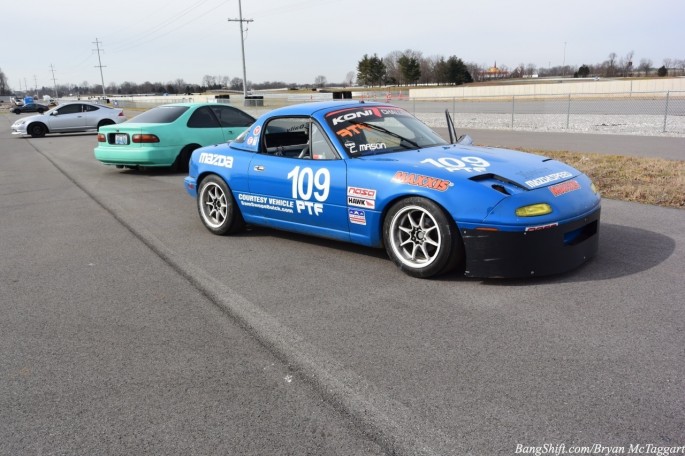 There was something for everyone. The Miata is fully prepared, while the RSX in the background was a big surprise, blowing away 1st and 2nd gear every launch. 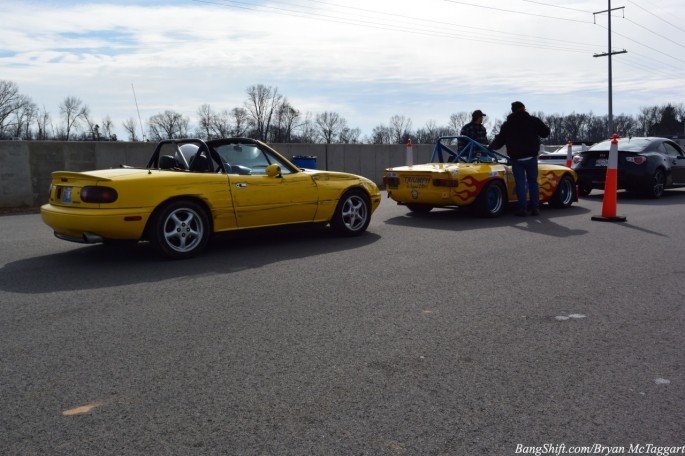 From mild to wild, it was represented. The TR6 sounded like a V8 at idle and screamed like a demon at WOT. The Miata reportedly earned it’s “stripes” that day. Whoops! 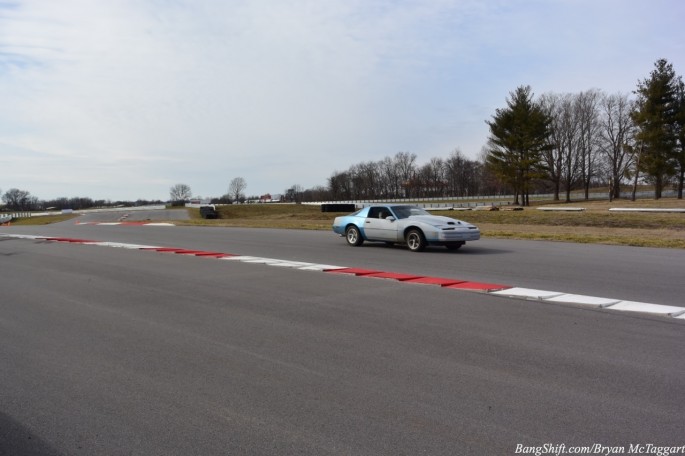 This fairly ragged-out Firebird was hot-lapping like there was no tomorrow. And it took every ounce of abuse thrown at it with composure. 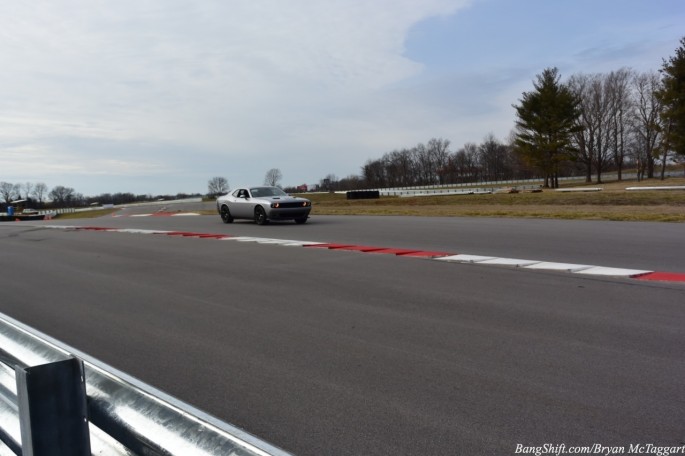 I wasn’t the only big Mopar out there, either. At least three Challenger SRTs showed up to run the track. All of them had one thing in common: the factory Brembo brake package. Hmm…

Now, I know the video sucks. NCM Motorsports Park doesn’t allow passenger ride-alongs, so I was down to using my iPhone. You can’t see out of the window and all you do get to see is what I do behind the wheel. I fought with what I have for the entire day, and this is the best clip. I’m already shopping for GoPros, so give me a little leeway and just enjoy the ride this time.

This 1923 Model T Equipped With Skis And Tracks Is Practical AND Slow This 1967 Intermeccanica Torino Is A Magnificent Mix Of Italian Styling And Ford V8 Power - Wow!

7 thoughts on “Project Angry Grandpa: We Take Our 300C To The NCM Motorsports Park For Some Exercise!”